Here is a not-often noted paradox. London is not just a business city. It is the economic capital of Europe and one of the great capitalist cities of the world. It is also the UK region with the highest proportion of private sector and self-employed workers. Yet even as it has extended its economic lead, and even as Jeremy Corbyn lags in the latest national general election polling, London feels like an increasingly left–liberal stronghold (see map of 2017 general election results above). 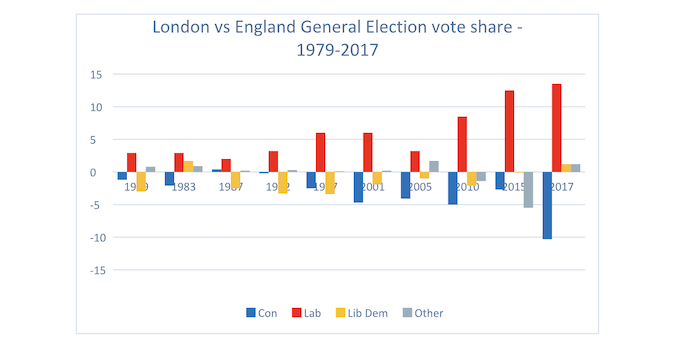 Why? There seem to be four main reasons:

First, the capital is a relatively young city and the young tend to vote Left and be liberal. Indeed, according to the Resolution Foundation, age is becoming as important as class and income as a predictor of voting behaviour.

Second, London is a well-educated city. More than a half of Londoners have a university degree, compared to a little less than 40 per cent for England as a whole. And better educated people are less likely to vote Conservative.

Third, London is, for all its wealth, an increasingly tough place to live. Wealth inequality has grown, housing costs have gone up and living standards have been squeezed. Some 28 per cent of London adults live in poverty compared to 21 per cent nationally. Perhaps, then, it’s not surprising that Londoners tend to look to Labour – the party traditionally aligned with the cause of the poor and hard-pressed.

London’s “progressive” vote is far from homogenous. Labour is by no means the only or “natural” home for London’s voters. Remember that the Lib Dems beat Labour in London in the European Parliament elections earlier this year, winning 27 per cent of the votes compared with Labour’s 24 per cent. Both the Greens and Lib Dems could well eat into both Labour and Conservative Remainer votes in the general election, while, where it runs candidates, the Brexit Party could do well among Leave-leaning Labour voters, especially in outer east London.

But the growing distinctiveness of London’s politics has at least two implications for our national politics. First, if the Conservatives are to reverse their decline in the capital – they came a very poor fifth in the EU elections in London, beaten not only by the Lib Dems and Labour, but by the Brexit Party and the Greens as well – they will to need to come up with a distinct London identity and narrative – much as the Scottish Conservatives have north of the border.

Second, we need more devolution to the capital. The UK has long been one of the most centralised of large Western nations and remains so today. There was a least a rough justice to centralisation when the different nations, regions and cities of the UK thought and voted alike. But as London develops its own political identify, so the case for giving Londoners more control over their city gets stronger.

Ben Rogers is Director of the Centre for London think tank. Top image from London Councils.