Skip to content
Malicious smears aimed at a Labour candidate for an Isle of Dogs seat were almost comically inept, but did nothing to improve the reputation of the borough's politics
Dave Hill

The muck and stupidness that soils Tower Hamlets politics isn’t entirely the fault of its politicians – bighead journalists, for instance, have long played an egregious part – but some of its activism, however marginal, continues to plumb the depths.

Last week, a digital leaflet was circulated online attacking Chris Worrall, one of Labour’s three candidates for the relatively marginal Blackwall & Cubitt Town ward at the edge of Canary Wharf. Worrall, a Labour Housing Group executive who co-edits the Red Brick blog, was described as a “BNP candidate” and “anti Black Lives Matter” in the leaflet, which bore the symbols of the Stand Up To Racism (SUTR)and Unite Against Fascism groupings. The leaflet also advertised what was billed as an “Anti Nazi Demonstration” to take place last Friday after prayers at the Al Aqsa Mosque, which is located in Blackwall & Cubitt Town.

It didn’t take a second glance to detect that this piece of election material was as incompetent as it was malicious – its credibility was hardly enhanced by its failure to spell Worrall’s surname correctly. It also contained what appeared to be quotes attributed to Worrall, although they were not sourced. Two people from Tower Hamlets SUTR issued a statement describing it as “a spoof” that was nothing to do with them and produced by someone “stirring up mischief”. The mosque stated that it had “no involvement in this matter” and had asked the police to make sure no demonstration took place outside its premises.

Nonetheless, the episode stirred sadly predictable suspicions. The mosque is at Thorne House, a housing block in Launch Street near Crossharbour DLR station, and its temporary structure forms part of the Island Bengali Welfare Association based there. A resident of Thorne House is Maium Talukdar, a candidate for the local Aspire party in Canary Wharf ward and also the election agent of Lutfur Rahman, the former Mayor of Tower Hamlets whose seemingly successful reelection for a second term in 2014 was famously declared void by an election court. 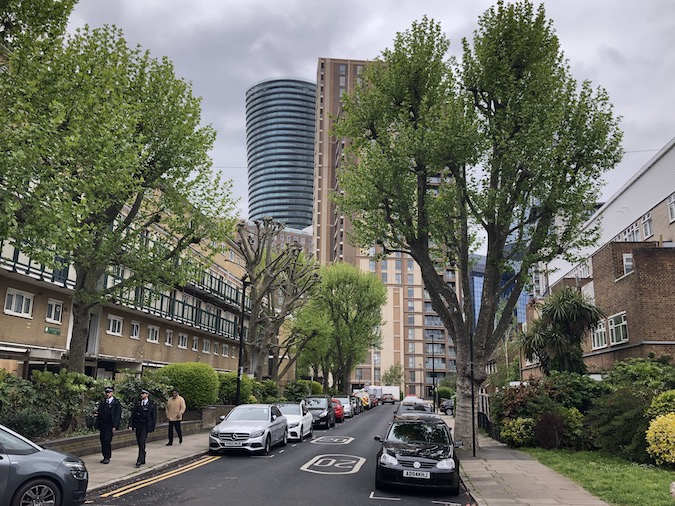 One of the claims upheld against Rahman was that his campaign falsely labelled John Biggs, his Labour rival in 2014, a racist. Biggs won the ensuing fresh mayoral contest, retained the mayoralty in 2018 and hopes to do so again. Now, Rahman is attempting a comeback under the Aspire banner. Inevitably, it crossed minds that the smearing of Worrall was the work of someone or someones hoping Rahman and Aspire would benefit.

Last Thursday, the day before the demonstration was advertised to take place, Taludkar issued a condemnation “with Rahman” on Twitter of “the personal attacks on candidates currently circulating on social media and in leaflets”, citing first a Labour leaflet “making disgraceful false allegations about Lutfur Rahman” before referring to “a disgusting forgery, supposedly from a mosque” – an apparent reference to the attack on Worrall.

Pondering this episode, it’s hard to say which is the greater – the nastiness or the ineptitude. The views ascribed to Worrall were torn shamelessly from the context of a long article he wrote in 2019, describing, with impressive honesty and insight, his London upbringing and the evolution of his political views. If Worrall is a BNP kind of guy, it will come as a surprise to Mohammed Pappu, one of his two fellow Blackwall & Cubitt Town Labour candidates. Together, the pair canvassed the Al Aqsa worshippers at precisely the time the demonstration was supposed to start (see main photo).

Of course, no demo took place, though a couple of Met officers wandered by, inquiring, with subtle politeness, if your white, shaven-headed On London reporter, lurking on the scene, might, perhaps have lost his way. Prayers took place in the open air round the back of Thorne House and when they were over, Pappu and Worrall offered their campaign literature to departees, engaging in discussion and exchanging pleasantries and banter. There was even a civil handshake with one of their Aspire rivals, Malik Abdul. Not all Tower Hamlets politics is poisonous – not by a long way – but some people do their best to make it so.