Skip to content
Labour would love to remove the Tory Prime Minister from his west London seat, but it isn't going to be easy
Lewis Baston

The 2019 general election is the first in which the leaders of both main parties are contesting constituencies in the same region since 1951, when Conservative Winston Churchill and Labour’s Clement Attlee ran for seats in what was then metropolitan Essex (respectively, Woodford and Walthamstow West). In 2001 the seats of Tony Blair (Sedgefield) and William Hague (Richmond) faced each other across the River Tees, but they were in different counties and regions.

This year, however, both Labour leader Jeremy Corbyn and his Tory counterpart Boris Johnson are seeking re-election in London seats – Islington North in the first case, Uxbridge & South Ruislip in the second. What are the two men’s constituencies like, and what can we tell about the state of national and London politics from looking at them?

I will start with Uxbridge & South Ruislip as the constituency has been named since 2010. Johnson had no particular link with the town of Uxbridge before 2015. His view of it had usually been the one from the M40 – a cluster of tall, shiny buildings on the ridge overlooking the River Colne marking the point at which one enters London when traveling down from Oxford. Like Johnson’s previous M40-corridor constituency Henley, it is part of the Bullingdon version of “flyover country”, a means to an end. Uxbridge & South Ruislip happened to be a reasonably safe Conservative constituency which had a vacancy for a candidate in 2014. As a London seat, it was convenient for Johnson, who was seeing out his final year as Mayor.

His relationship with it is much more distant and transactional than those between most party leaders and the seats they represent. Tony Blair took on the communitarian, patriotic politics of the Trimdon Labour Club. Margaret Thatcher was a fair reflection of the prosperous Jewish suburbia of Finchley. John Major spoke for the classless, home-owning ex-Londoners of Huntingdon. By contrast, Johnson’s relationship with Uxbridge is a throwback to previous decades. Harold Macmillan may have represented Bromley in parliament, but his politics were largely formed by his previous seat of Stockton, and the earlier generation of Churchill, Ramsay MacDonald and Herbert Asquith changed seats almost as often as Johnson changes partners. 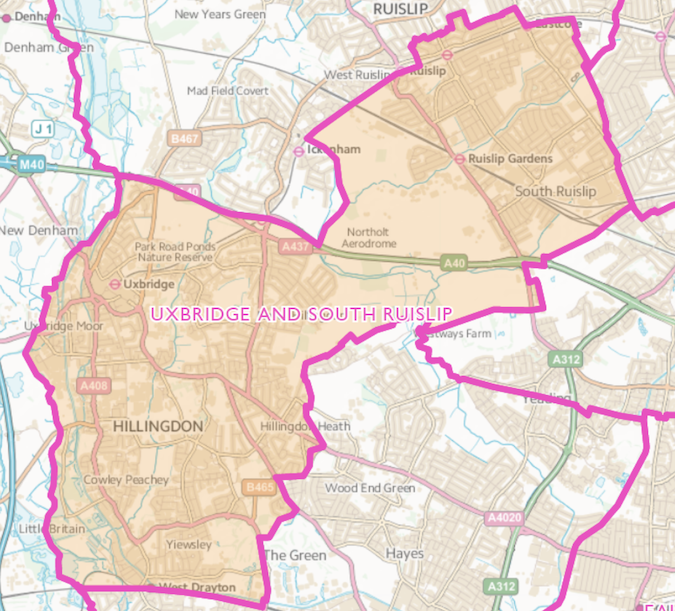 Administratively, there is no doubt that Uxbridge is part of London – it is home to the early post-modernist civic centre from which the borough of Hillingdon is governed, the terminus of branches of the Piccadilly and Metropolitan Lines, and the Transport for London roundel decorates its bus stops. The area was in the process of being absorbed into London when the great inter-war sprawl stopped suddenly in 1939. Yet Uxbridge continues to have an ambivalent relationship with the capital. It has its own telephone code (01895) separate from the London exchanges, its own postcodes (UB) and a lingering sense of a Middlesex identity.

South and east of Uxbridge town, the constituency covers a number of villages that have sprawled and straggled together, ceasing to be rural but without creating a coherent urban pattern – Cowley Peachey, Yiewsley, Colham Green, Hillingdon… There are big, newer complexes in some of the spaces between them, notably Brunel University and Hillingdon Hospital. Since 2010, the constituency has vaulted north and east across the A40 and Northolt airfield to cover South Ruislip and Ruislip Manor, an area that was mostly the product of classic 1930s Metro-land suburban development.

Uxbridge has a somewhat unusual electoral history. Labour last won it in 1966 when Harold Wilson secured a general election landslide, but fell just short in Blair’s landslide of 1997. The Conservatives successfully defended the seat in by-elections in 1972 and July 1997, indicating a long term drift to the right. Since 1972 Uxbridge has had three MPs – Michael Shersby until 1997, then John Randall, who handed over to Johnson in 2015. Randall was a popular local figure, owner of the independent Uxbridge department store that bore his name until the family firm finally closed its doors the year he stood down.

However, when Johnson was selected to succeed Randall in September 2014, Uxbridge & South Ruislip had ceased to be quite the stronghold it seemed. The influence of London had shifted it towards the Tories as its population became more middle-class and commuting (as with other nearby seats such as Wycombe and Spelthorne, which were Labour in 1945 but not in 1997). But other trends were growing. Brunel University and the expansion of higher education created a growing student population and, as in other west London suburbs such as Heston, Harrow, Wembley and Greenford, the BAME population has also been rising rapidly. Even in the more insular, villagey wards like Yiewsley it was over 30 per cent by 2011. To general surprise, Labour surged in 2017 and halved Johnson’s majority.

Labour’s improvement owed much to the mobilisation of students and BAME voters. The Labour campaign is hoping to use that formula again this time to pull off the startling achievement of unseating a sitting Prime Minister. The party’s young candidate Ali Milani cut his teeth on student politics in Brunel. I’ve written elsewhere about the phenomenon of party leaders tending to rise above the national swing in their own seats, but we do live in strange times.

The Conservatives go into the Uxbridge & South Ruislip battle with some other advantages too. They are well dug in as far as local politics is concerned, winning every council seat that falls into the constituency in 2018, including gaining one from Labour in the student-influenced wards of Uxbridge South ward and comfortably seeing off a challenge in Brunel ward. Across the constituency the Tories polled 60 per cent and Labour 30 per cent, hardly suggesting an invincible red tide. The Tories were easily able to see off a Hillingdon Labour campaign which was strong – perhaps overly strong – on enthusiasm and Momentum volunteers from across west London. Their rather professional local organisation based its strategy on knowledge of the electorate and taking nothing for granted following the 2017 shock. That pattern could well be repeated in 2019.

Prime Ministerial constituencies attract more than their fair share of rag, tag and bobtail candidates. Uxbridge & South Ruislip ballot papers will feature 12 names altogether. As well as Johnson and Milani, there will be Joanne Humphreys for the Lib Dems, a Green, a UKIPper and seven others, including rival waste disposal aristocrats Count Binface and Lord Buckethead. One may note in passing that the Antonin Artaud Theatre is based in Brunel University, at the heart of the constituency. I’ll leave it to readers to decide whether contemporary British politics is the Theatre of Cruelty or the Theatre of the Absurd.