June’s mid-year population estimates showed that whilst London’s overall population growth has picked back up, its population of younger Londoners revealed signs of decline. Off the back of the data release, there was a lot of talk in the press about a “millennial exodus” from the capital. The opinion pieces flowed. Some argued that the issue is structural failures, while others pointed out that London’s millennial exodus fuels rental growth in Manchester.

Reading this, you might think that London was experiencing a millennial outflow of biblical proportions. But the millennial age group is very broad. Technically, it includes everyone born between 1981 to 1996. Within that group are Londoners at vastly different stages in their life – 23-year-olds who are more mobile and less committed than their 33-year-old counterparts.

“Millennial” might be an easy term to use, but it masks a lot of generational complexity, not least because we cannot track the same individual over time. Let’s step behind the headlines to see if there’s more than meets the eye. Is the decline in millennials something that London’s city leaders need to be concerned about?

According to headlines, over a third of a million young people left London for the second year running. On the surface, this sounds like a worrying statistic. But broken down, it doesn’t seem as frightening. Because, to put it simply, if London were a nightclub, it would have a lenient one-in-one-out policy.

While 365,800 millennials left London for a new life in the country, nearly the same number (355,600) moved into the capital from the rest of the UK. This means that, overall, there were actually only 10,200 fewer millennials in London in mid-2018 when compared to the previous year. This represents 26 per cent more people aged 23-38 staying in the city than the previous year. 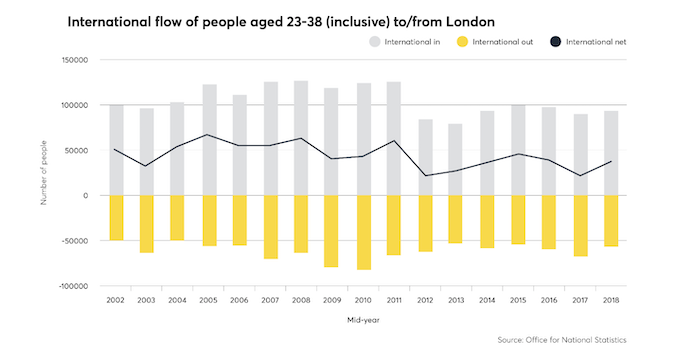 And as much as internal markets shape patterns of movement, so too does ebb and flow of global migration. However, unlike migration within the UK, international flows of millennials are subject to far greater fluctuation.

Despite the potential consequences of new immigration rules and uncertainty around Brexit, the number of young people coming into London from abroad is increasing.

More millennials moved in from abroad in the year to mid-2018, and fewer moved out, resulting in a sizeable 74 per cent growth over the year. This means that international millennial migration has (almost) returned to pre-Brexit referendum levels. 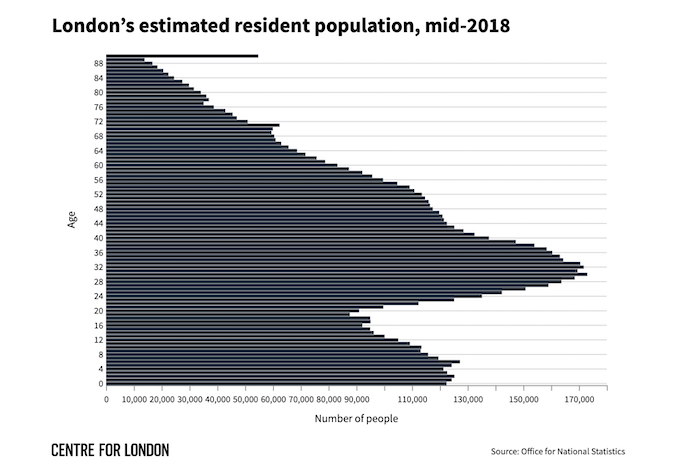 Any changes in the number of millennials in the capital should be read against the backdrop of an ageing population. Fewer people are entering the 23-38 age bracket than are departing it.

This natural change means that London’s millennial population is starting to slowly decline. But unlike the headlines would have you believe, this decrease isn’t caused by an increase in young people leaving.

The nuances within the data make the headlines seem far less alarming. With internal migration stable, and international migration up, there appears to be less for London’s leaders to worry about than first meets the eye.

There is a magnitude of reasons why one person may leave a city for pastures new. Some people grow tired of city life. Some want to move closer to family. Some seek a new adventure.

London should accept that it can’t, and shouldn’t, try to hold on to everyone. The movement of young people to and from the city benefits both the capital and the areas to which these millennials move.

But anecdotal evidence suggests that poor air quality, unaffordable house prices and inaccessible child-care are beginning to tarnish London’s charm. These push factors need to be addressed to ensure London can be a truly liveable city.