As Parliament judders towards a general election, at local level the gears are whirring. London’s Liberal Democrats are feeling confident, thanks to a huge boost to their membership – up 300 per cent since the 2016 EU referendum to around 24,000 – and their performance at May’s European elections, which saw them beat Labour to the largest vote share in the capital.

“I genuinely think this is the most exciting time to be a campaigner,” says Anthony Fairclough, Lib Dem Group leader in Merton, where the party recently took the first London council seat off Labour since 2009. “Far more is going on now than ever has before. People have been warmed up in all sorts of areas,” says London Assembly candidate Rob Blackie, noting numbers on the People’s Vote March last Saturday rallying to Lib Dem groups from the likes of Croydon, Greenwich and Enfield.

In two iconic Conservative seats – at the heart of Westminster itself, and in Margaret Thatcher’s old home turf in north London – Lib Dems might be on the brink of spectacular coups. Having decided to run for Cities of London & Westminster (“Two Cities”) on the strength of private polling, Chuka Umunna has seen both his main opponents, Labour’s Steven Saxby and the Conservatives’ Mark Field, withdraw from the race. Lib Dem campaigners canvassing at least once daily in the week and five times across the weekend report “a complete collapse of the Labour and Tory vote”, with Knightsbridge and St James’s the best-performing wards for them.

Meanwhile in Finchley & Golders Green, a Survation poll of 400 residents has put Luciana Berger seven points ahead of sitting Tory MP Mike Freer. Berger’s campaign launch last Sunday morning attracted a crowd of over 100, including many new members. Barnet councillor Gabriel Rozenberg, who recently defected from the Tories, says the campaign has “a real grassroots energy”, fired by simultaneous contempt for both Tory and Labour leaders. 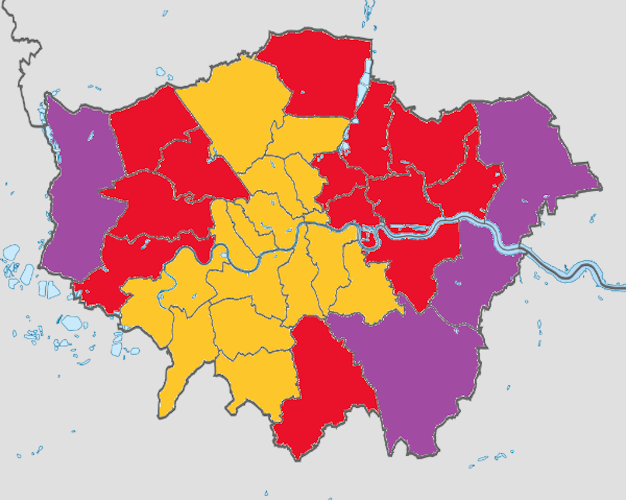 Other Lib Dem hopes in London include regaining Richmond Park and Sutton & Cheam in the south west and capturing Chelsea & Fulham, where Nicola Horlick is their candidate. There have been spectacular surges in their support in Wimbledon and in Vauxhall and Streatham (which voted 77.6 per cent and 79.5 per cent Remain respectively). Bermondsey and Kensington have also seen flurries of new supporters. Lib Dem dreams can be visualised in a map of the leading party by area at the European elections (see image above), a broad band of yellow from Enfield to the south-west, or the gold chain of constituencies along the river including Battersea, Putney and Vauxhall, which emerges from plugging polling data into Electoral Calculus.

The party’s national target list has increased from 40 constituencies to 76, with Umunna talking up the idea of winning 200 seats. Commentators warn that this is fantasy thinking which risks damaging the party’s position by neglecting defence of existing seats. Perhaps that doesn’t do justice to the Lib Dems campaigning playbook. What they lack in party coffers, they make up for in agility. There are several tiers of target seats. Efforts will be focused in a few to start with but the party has become adept at shifting resources later on to others that look promising.

Nothing is plain sailing, though. Two Cities and Finchley & Golders Green are unknowns for the Lib Dems. In Hornsey & Wood Green, Labour may have lost seats to the Lib Dems in the 2018 Haringey borough elections but political affiliation there “swings around more than Guardian editorial policy does”, says Labour activist and commentator Luke Akehurst. In Richmond Park, the Greens have selected a candidate – no Remain alliance to help unseat Zac Goldsmith as in 2016, it seems. London Conservatives may be thoroughly demoralised and lacking leadership. But at a local level there will always be exceptions, such as the energetic Greg Hands in Chelsea & Fulham.

Plenty of research suggests Remain and Leave have become stronger identities than attachment to political parties, to the benefit of the Lib Dems because of their Brexit stance. The example of the Iraq War, which strengthened the Lib Dems and weakened Labour in the 2006 London local elections and beyond suggests such huge issues can continue to be electorally powerful years after the event.

The controversy over negotiating our future relationship with the EU may become even more bitter than it is already. Queen Mary Professor Tim Bale predicts a “fairly long half-life” for Remain, and good news for both the Lib Dems and Greens if Labour is seen to have facilitated Brexit, as is already being suggested. His colleague Javier Sajuria raises a chicken and egg question. In November 2018 London polling the Remain/Leave split correlated quite well with patterns of support for the main parties, and while Remain/Leave identities may have become more entrenched since then, Sajuria thinks party loyalties could predict these too.

Tony Travers of he London School of Economics points out that while the Labour vote in Inner London suffered badly at the European elections, it held up in Newham, Barking and Havering. Labour might look on its uppers. But what happens, asks the University of Kent’s Matthew Goodwin, in a post-Brexit general election where economic justice issues come to the fore, and the case for Rejoin doesn’t have the same traction as stopping Brexit? Don’t exaggerate the Lib Dems’ likely ceiling of 45-50 seats in Parliament, Goodwin says. Yet even with just two or three more London seats, the party could have a critical impact in undermining the Conservatives and entrenching the UK’s big city/small town divide.

Where does this leave the London Mayor election? Lib Dem candidate Siobhan Benita speaks passionately about standing up for the majority in the capital who don’t want to leave the EU – “we are definitely more representative of Londoners than anybody else” she says. But she faces an incumbent with a strong Remain identity in Sadiq Khan, and her campaign is working hard to define Rory Stewart as a Brexit supporter, albeit one who opposed “no deal” and even though he voted Remain in 2016.

Some commentators dismiss Benita’s chances. Don’t assume anything, says Tony Travers: it may come down to how successfully the runner-up attracts second preference votes – and to date the more Left-wing candidate has always done better at this stage, observes Omar Khan of Runnymede Trust. Then there is the question of timing. The tone of the campaign will be very different if Brexit and a general election are well out of the way first. By contrast, there could even be a scenario in which both are further delayed and the general and mayoral elections happen on the same day in May, with Brexit still very much a key issue.

Certainly, we must hope the media don’t treat the mayoral race as secondary to the national Brexit psychodrama, or dumb it down as the Sadiq, Rory and Shaun show. Brexit has profound effects that need a specific London policy response. And beyond it, there is a capital city’s worth of issues lost in the fog of politicking, crying out for attention.

OnLondon.co.uk strives to provide high quality coverage of all the big London issues. The site depends on donations from readers. Can you spare £5 (or more) a month? All contributions gratefully received. Thank you.