The delay to the opening of Crossrail has piled further pressure on Transport for London’s budgets, requiring its number crunchers to make adjustments for the non-appearance of a big new money stream – fares from the Elizabeth Line – they had hoped would begin flowing from before Christmas. How will this setback affect TfL’s ability to do its job?

The question was at the heart of Monday’s gathering of the London Assembly budget and performance committee, which is chaired by Gareth Bacon, leader of the Assembly’s Conservative Group and one of its most effective interrogators. The committee’s guests included TfL commissioner Mike Brown, deputy mayor for transport Heidi Alexander and TfL’s chief financial officer Simon Kilonback.

This low profile gathering of some big league London governance players was enlightening in several ways, not least for providing a fuller picture of how TfL intends to keep performing its basic functions and deliver large components of Sadiq Khan’s transport strategy. The transport body has stated publicly that the latter hasn’t become any easier, due largely to a combination of  disappearing government funding and slowdowns in public transport demand.

A delivery timetable was set out for the committee in a presentation by Kilonbach. The relevant page is reproduced below. The first phase of the Ultra Low Emission Zone (ULEZ) will be the headline-grabber of the 2019/20 financial year. It is to start on 8 April, levying an additional £12.50 on the most polluting vehicles entering the congestion charge zone in Central London and forecast to affect up to 60,000 of them every day.

The Northern Line extension, bringing the Tube into the huge Vauxhall, Nine Elms, Battersea regeneration area with new stations at Nine Elms and Battersea Power station from Kennington, is, the committee was assured, on track to open in 2020. After that – and after the next mayoral election – the long-awaited extension of the London Overground from Barking station to the huge Barking Riverside development should be complete and running services in 2021, with construction starting soon. The upgrade of Bank Underground station is timetabled for completion in 2022/23, and the Elephant & Castle’s – financially enabled by the redevelopment of the Elephant’s shopping centre – in 2023/24. Holborn’s is lined up to begin in the same year. 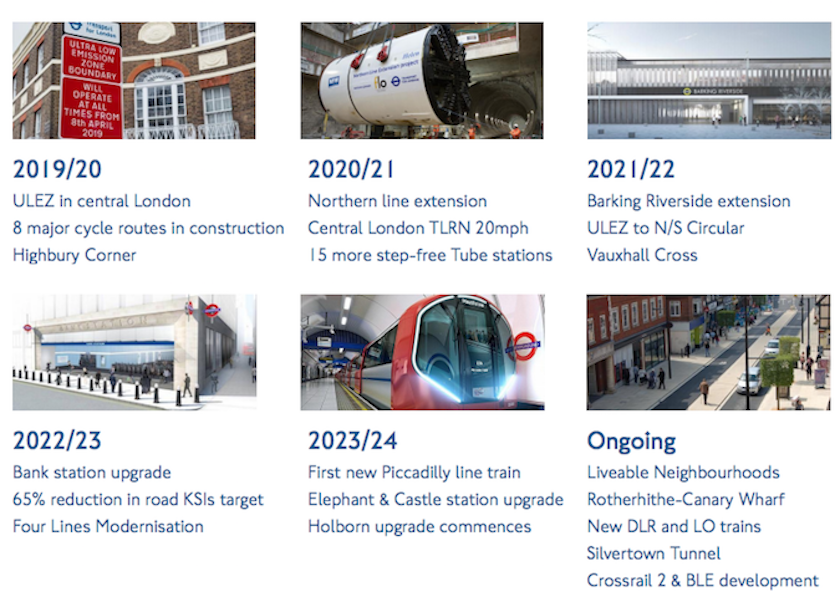 Then there’s a list if items somewhat enigmatically headed “Ongoing”. It includes the planned new pedestrian and cycling bridge across the Thames between Rotherhithe and Canary Wharf, a project explicitly mentioned in Candidate Khan’s 2016 manifesto. Caroline Pidgeon, the Liberal Democrat who chairs the Assembly’s transport committee, asked about this, recalling a hoped-for completion date of 2024. Kilonback said that money for the project is “fully provided” in the latest TfL business plan and that it is “very much on”.

The detail of “ongoing” also interested Len Duvall, the experienced Labour Group leader. Kilonback’s presentation had put projects of into four categories: critical, which covers maintaining current safety levels across the networks; central, defined as “projects most aligned to mayoral and mayors transport strategy outcomes”; desirable, which covers “projects contingent on funding availability”; and deprioritise, which, in plain language, are things that can be put off or effectively dumped.

“Do we need a new category for projects that are very much ready to go but there’s no money for them?” Duvall inquired. He had particularly in mind the extension of the Bakerloo Line south of Elephant & Castle. This was designated by Kilonback as needing funding from the government. The same goes for new Piccadilly Line signalling and Crossrail 2 (which former transport minister Steve Norris believes needs a rethink). Of the Bakerloo, Duvall said: “In reality, it’s not going to be a year late, or two years, it is stopped.”

He praised TfL for its quick recalibration after the Crossrail blow – though it’s worth stressing in passing that this had been a well-flagged possibility many months ago – and for its clarity, but maybe a little further frankness was required. Might the same apply to the Silvertown Tunnel? The upgrade of Camden Town Underground station? “You’re telling me it’s live, but from the information we’ve gleaned from the various bits of paper, you’ve cancelled it.”

Brown acknowledged that, “It’s not where we’d want it to be in an ideal world”. The problem, surprise surprise, is money: TfL itself will have to put some in, but they also need “a third party contribution,” which means cash from a property developer as part of securing permission to build housing on the site. That is being discussed, Brown said. But Duvall went on to put his finger on a tension between the Mayor’s requirement that 50 percent of homes built on TfL land overall be “genuinely affordable” and TfL’s need for money for transport infrastructure: basically, the more the developer contributes to housing affordability, the less there is likely to be for upgrading an often very overcrowded Tube station.

Brown said, in effect, that this circle can be squared. But the exchange illustrated well the significant and growing dependence of TfL, a public body, on the private property sector to finance the public transport London needs.

A broader picture of the financial landscape was painted by Heidi Alexander, who is proving to be an impressive successor to Val Shawcross. “The biggest risk to TfL’s business planning is a catastrophic ‘no deal’ Brexit,” she said. “In my six months in this position the work that has been done and demonstrated to me in making savings gives me confidence in the ability of the organisation to reduce costs and still deliver a high quality public transport service to people. But there are a whole range of external factors that could impact.”

We might take those to include the government’s next comprehensive spending review, due later this year. Who knows what its attitude to London and its transport needs will be? Who knows anything at all about what tomorrow might bring?

Watch the whole of Monday 7 January’s budget and performance committee meeting via here. Simon Kilonback’s presentation materials are available via here where there is a link to TfL Business Plan – Presentation.