Centre For London’s latest facts and stats bulletin on the capital’s vital signs offers cherries to pick for protagonists on either side of the Brexit divide. The anti-Brexit Evening Standard highlights a slowing of the capital’s population growth – yes, it is still going up – and the Centre’s observation that this might, in the longer term, “significantly damage our economy” rather than reducing pressure on infrastructure and public services. The Independent grabs the chance for another of those house price-related “exodus” stories.

Conversely, champions of Brexit can seize on the Centre’s reporting that “London’s economy continues to expand, with lower unemployment levels and job numbers in the capital reaching new highs”, adding that this is “particularly encouraging against the background of continuing uncertainty around Brexit.” The Financial Times has led on this part of the research, reporting that London’s economy is growing slightly faster than that of the rest of the country.

So what is the true story here? It is, of course, that both main themes of the fifth edition of The London Intelligence are important, and their significance to some degree unclear or open to interpretation. And much of the detail is intriguing.

The cheering news on the economy takes a different forms. An important survey of business activity – the purchasing managers’ indices – produced an overall score in June that is its highest since last October. The number of jobs in London went up to 5.9 million in the first quarter (Q1) of 2018, a rise of 1.9 per cent compared with the same period last year. The rise was pretty evenly spread, though there were strikingly large hikes of seven per cent in the real estate and creative sectors and in civil service posts, principally in – wait for it – the Department for Exiting the European Union. And unemployment has kept falling, with its Q1 figure of 255,000 described by the Centre as “close to a record low”. 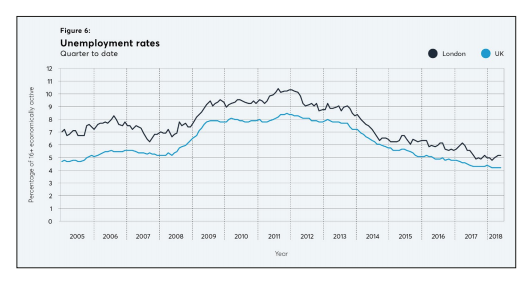 It isn’t all optimism, though. Productivity in London, though still far higher than in the rest of the country, has dropped a little, and new entrants to the job market have seen a seven percent fall in their wage levels since the 2009 financial crisis. Meanwhile, the Centre underlines that in-work poverty in London is getting worse.

The population story derives from a considerable fall in the net increase in people moving to London from overseas combined with a net rise in the number moving out of London to other parts of the UK. The estimated net gain in overseas migrants to mid-2017 was just under 83,000 people, and the estimated net loss domestically was about 107,000 (336,000 left compared with 230,000 who arrived). The reason the population kept growing anyway was that the number of births continued to substantially exceed the number of deaths. It all boiled down to a small increase in the number of Londoners than was expected. 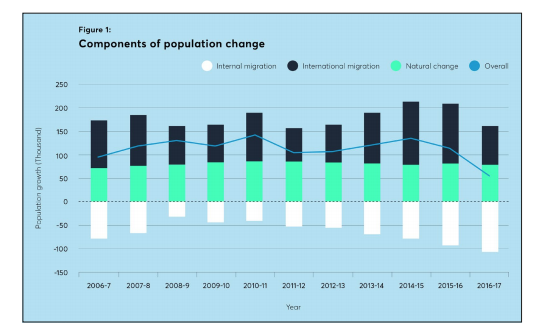 How important are these changes and why have they occurred? Centre For London’s research manager Silviya Barrett provides the measured view that it is too early say whether the levelling out of population growth is “a temporary blip, perhaps reflecting post-EU referendum uncertainty, or the beginning of a longer term trend”. Vicky Pryce from the Centre for Economics and Business Research warns that “any loss of EU workers and the likelihood of [financial] services not being covered by any Brexit deal would leave the City particularly vulnerable.”

What about The Independent’s population “exodus”? We need to be a little careful with that idea, whether in relation to past claims about “white flight” from London’s ethnic diversity (which have been persuasively challenged) or of Londoners being “pushed out” by rich foreigners buying all the houses. Bear in mind that net outward internal migration has been a routine feature of the capital’s demography for decades. The overall outflow of 107,000 is higher than the 93,300 of the previous year, continuing a trend of increases. But it is still not as high as in 2004 (110,200) and not much higher than in 2003 (103,133).

High housing costs might not tell the whole story, though they have always been a driver for such population movement. And while the numbers in their late twenties and thirties heading out probably reflect how tough the current situation is, it could be that part of the increased outflow is down to people who’d been delaying selling up and heading for Hertfordshire or Kent while London property prices were soaring now getting round to it as they’ve stabilised and in some boroughs even fallen (see the map below for what’s happened in, or example, Brent and Southwark). 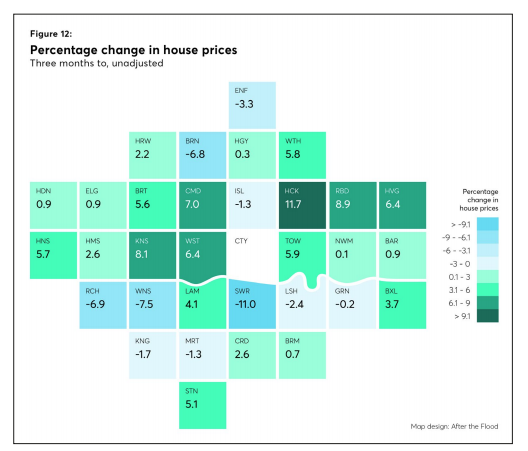 Is the housing situation looking up at all? Not really. The housing supply pipeline remains “relatively stable”, says the report, but the year to March 2018 saw 24,000 homes completed – quite high compared with recent years, but very far short of the 66,000 needed, according to Sadiq Khan’s draft new London Plan. Permissions for a quarter of the 145 large housing schemes proposed were not granted planning permission by the boroughs concerned. “This may indicate that many councils are coming under pressure to ensure high levels of affordability in new developments,” the report remarks. The Mayor’s “threshold” approach seeks 35% of homes in new schemes to meet his definition of “genuinely affordable”.

There’s lots more valuable information in the latest London Intelligence, so take a look for yourselves here. All the graphs and charts here originated there.

LONDON AND BREXIT: Will leaving the EU be good or bad for the capital? On London and the illustrious London Society have jointly organised a debate about this crucial question. Anti-Brexit campaigner Andrew Adonis, former Boris Johnson adviser Daniel Moylan and Lib Dem AM Caroline Pidgeon have already been booked to speak. Buy your tickets here.