Bailey’s tweet misrepresented what is, in fact, only a possible future measure for helping Transport for London achieve long-term financial stability in the post-Covid future. It is one element within a range of options – the Financial Sustainability Plan – submitted to the government by TfL on 11 January, as required under the terms of the second emergency funding deal (or “bailout”) signed at the end of October.

What Bailey has chosen to call a “commuter tax” is, in reality, a theoretical new piece of road-user charging in additional to those London already has, which TfL calls in its plan a Greater London Boundary Charge. It would be a fee raised from the owners of all motor vehicles entering London from outside, except for vehicles registered in London – those belonging to Londoners, essentially – along with emergency vehicles, taxis and other special cases. It would operate seven days a week from 6.00 am until 7.00 pm.

It has not been agreed that the Boundary Charge will be brought in, which means Bailey’s claim that Khan is “introducing” it is false. Even if it were agreed, under TfL’s plan it would not be implemented until October 2023 (assuming, as seems likely, Khan is re-elected). Moreover, the Boundary Charge idea is presented as just one of two possible ways for TfL to raise an estimated £500 million a year post-2023. The other is for it to retain the same sum from vehicle excise duty (VED) raised in London each year. See below. 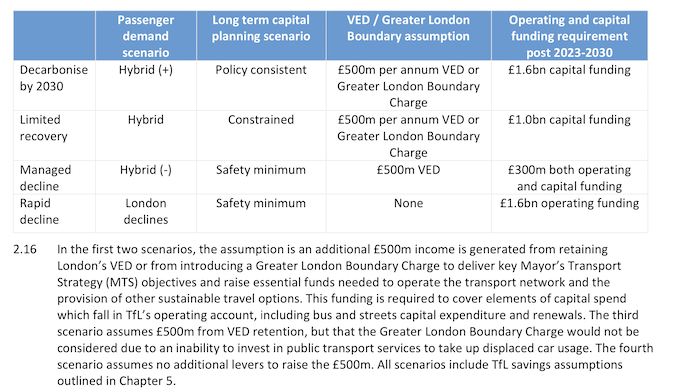 TfL’s plan also assumes that the Boundary Charge, if introduced, would be £3.50 per day – not £5.50 as Bailey claimed on Twitter – except for vehicles that did not comply with the environmental standards of the Ultra Low Emission Zone. Those vehicles would be surcharged an additional £2 a day, bringing the Boundary Charge applied to them up to £5.50. Bailey’s tweet wrongly implies the Boundary Charge would be £5.50 for all vehicles. Again, see below.

The TfL Financial Sustainability Plan proposals were published online some days before Bailey’s tweet for anyone to see.

OnLondon.co.uk provides fair and thorough coverage of the UK capital’s politics, development and culture. It depends greatly on donations from readers. Give £5 a month or £50 a year and you will receive the On London Extra Thursday email, which rounds up London news, views and information from a wide range of sources, plus discount and exclusive offers on events and publications. Click here to donate directly or contact davehillonlondon@gmail.com for bank account details. Thanks.