Skip to content
The U + I scheme will go ahead, despite opposition of local community group
Dave Hill

Lambeth Council’s planning applications committee has given consent for the regeneration of the London Fire Brigade’s station and museum at 8 Albert Embankment, despite concerted opposition from local campaigners.

The scheme, to be delivered by developer U + I over two main sites separated by Lambeth High Street, will see the part restoration and extension of the former LFB headquarters, which face on to Albert Embankment, and the demolition of buildings on the neighbouring piece of land to its east.

The new development will see the creation of a new, permanent London Fire Brigade museum, 443 new homes, a hotel, a restaurant and business and retail space within buildings of up to 26 storeys high.

Writing for On London in August Lambeth, LFB commissioner Dany Cotton praised the scheme, saying it would “protect not only the history of the London Fire Brigade but out place at the heart of Lambeth’s community too”.

However, Richard Pinder of the local Lambeth Village community organisation, argued that Lambeth’s planning officers and councillors should reject the application, pointing out that that it was already designated a “departure application”, meaning it would normally be turned down for being at odds with local planning policies.

The plans still need to be endorsed by Sadiq Khan who, as London Mayor, has powers to block or demand adjustments to large development projects, or to take over their determination himself. 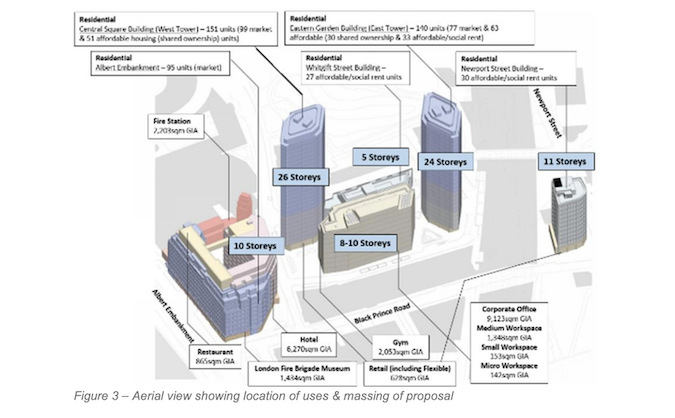 Responding to initial plans in June, City Hall officers noted in their Stage 1 report that the housing provision did not meet the Mayor’s “threshold” requirement that at least 50 per cent of new housing on land owned by the Greater London Authority, which the LFB site is, should conform to his definition of “affordable” and that the developer’s viability calculations would therefore be reviewed.

The final, consented plans show an increase in the number of homes by 26 and in the percentage of them deemed “affordable”, from 34 per cent to 39 per cent. The 172 affordable homes (which equate to 40 per cent of the total as measured by habitable rooms) will comprise 82 shared ownership dwellings and 90 for Affordable or Social Rent.

The Lambeth Village group objected that Lambeth’s planning policies “clearly state that the site is not suitable for tall buildings” and that the proposals would have a “major adverse” effect on light reaching nearby council homes. They also said the new buildings would damage views and architectural settings.

A third, smaller section of the development area on the junction of Black Prince Road and Newport Street, comprising a car park currently used as a plant nursery, will see construction of an 11-storey residential building. Residential buildings of 26 and 24 storeys will stand on the largest, central area of the site and the former headquarters building, which will contain the restaurant, museum, hotel and fire station, will rise to ten storeys.

London.co.uk is dedicated to providing fair, thorough, anti-populist coverage of London’s politics, development and culture. It depends on donations from readers and would like to pay its freelance contributors better. Can you spare £5 (or more) a month? Follow this link if you would like to help. Thank you.