Skip to content
Social distancing may be necessary for now, but in the long term it is no way to live
Lewis Baston

I haven’t enjoyed lockdown. I realise that I’m in a favourable position compared to many people. My physical health is good, although I have put on alarming amounts of weight thanks to an abundance of very tasty home cooking and a lack of exercise. I’m not on my own in the house, but there’s still space for silence and privacy. I’ve got good neighbours, even though a wave of exercise-related accidents seems to be scything them down. My retired parents are happy and healthy, enjoying their reading and gardening, and they probably hear from me more often than usual. I’m able to avoid risks, as I’m not among those people, like supermarket workers, bus drivers and NHS staff, whose work puts them in danger. I expect the government’s assistance for the self-employed is going to help me, and I’m grateful for the open-handed approach that Rishi Sunak adopted early in the crisis (although there now seems a concerted effort to row back at the expense of local government and furloughed workers).

The problem is mental, perhaps even spiritual. I’ve suffered from depression for many years, and the boredom, frustration and unrealistic expectations of what one can achieve given enough time are food for the black dog. My work lately has mostly been about European borderlands, and I usually travel a lot – not only does this stimulate my creativity, it is also liberating and enjoyable. It has become a bit of a standing joke for my On London colleagues, as I file pieces about London borough by-elections from destinations like Kyiv, Prague and Chernivtsi. But travel – and elections – stopped in its tracks in mid-March.

I struggle with a sense of purpose at the best of times, but the lockdown period has been particularly trying. My geographical horizons have narrowed. Compare and contrast the two maps below. The one on the left shows the number of days on which I was in each country shown in the 75 days before 16 March. The one on the right summarises my travel in the 54 days since. It’s all been on foot, except for one last work-related Tube journey on 18 March.

It’s good to try to see the compensations. My colleague Vic Keegan’s columns about Lost London and the Twitter account Look Up London are encouragements to take the time to see the quirky and the significant as I walk around my little corner of the city. Even after 16 years living here, there were still a few streets of Camden Town that I had never walked down. So it was that I discovered the Dickensian alley that is College Grove – and the veterinary college’s cow enclosure, although the beasts themselves have left the city during the pandemic. I had often seen the back gardens – all willows and wooden boat docks – of St Mark’s Crescent. The canal towpath is a bit scary from a social distancing point of view at the moment, but I had never seen the other side of it and never knew that A.J.P. Taylor had lived in one of them.

I’ve been to the lovely Reed’s Place, in the No Mans Land between Camden and Kentish Towns. I’ve fussed over strange cats. I’ve noticed that synchronicity and coincidence seem to have been accentuated by the shutdown: usually one can go for weeks without running randomly into neighbours down the street, but it happens more or less every day at the moment. On a rare foray outside my borough, I was walking down a side street in Islington and bumped into – or, rather, had a two metre near miss – with two friends for whom that street was also well away from their normal trade routes.

“If you can’t be with the one you love, love the one you’re with.” I love my London home, but the wanderlust is still there. I heard the call of the river, and – The Clash playing in my mind – was drawn to its shore. The vista from Blackfriars Bridge is quintessential London, but to stand over the Thames is to see the water flow from England through the city and out into Europe and the world. It was a brief, vicarious taste of freedom of movement. On the south side, below the Founder’s Arms where I have had numerous happy, argumentative, poignant and sad evenings, but which now stands empty, I went down to the strange, sandy little beach. A goose was down there with me, at one point raising its wings as if to conduct an invisible, discordant orchestra. Birdsong is the soundtrack to the shutdown: the absence of bustle makes it more noticeable, but perhaps we also notice birds more because they fly free. I’ve noticed jays and parakeets, and followed blackbird and great tit family soap operas. 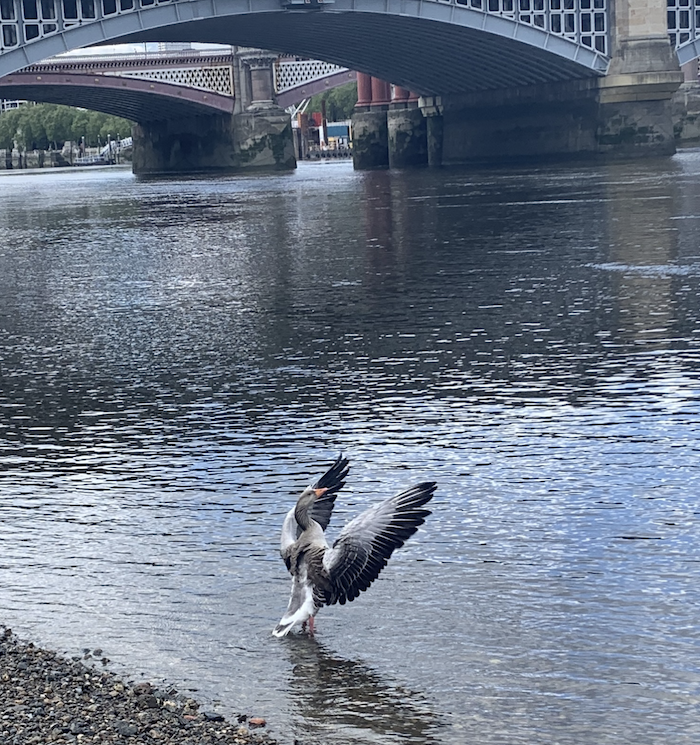 I realise that it will take some time for international travel to be possible again and that it will have to be restarted in a phased and sensible way. There will probably have to be some sort of quarantine for a while, and it’s conceivable that other countries will impose strict controls on people travelling from the UK because of the poor outcome here. Rather optimistically, I didn’t cancel a trip to Finland and Estonia entirely, but in late March I punted the flight from next week into the second half of October. I’m not sure it’ll be possible or sensible, but if it is, I’ll be there.

I hope, too, that international trains will be open later this year and that the coronavirus crisis on top of the climate crisis will mean that railways become the highest-priority mode of transport as Europe works out how to resume the bustle and interchange of people that makes it such an exciting place to live. I’m pining for my friends, but I’m not visiting their houses or going to the pub. Social distancing is necessary but it’s tough. It would also be mad to keep doing it any longer than one has to.

Closing the borders is social distancing writ large – necessary, but no way to live in the long term. The worst outcome would be a permanent closing of borders and minds, for us all to become more insular. There’s enough of the isolationist virus in the air as it is. For now, though, I am planning my afternoon walk and, if I’m feeling particularly adventurous, I might ramble the far side of Kilburn High Road and enter the borough of Brent. Brent South today, Soweto tomorrow…