When London’s Olympic bid was won in July 2005, countdown to moving day began for the Manor Gardening Society, whose members had cultivated allotments on the east bank of the River Lea since the 1920s. And in 2007, they made way for preparation of the very different kind of landscape that would cradle the London 2012 Olympic Park.

It was a melancholy time. Mark Harton, secretary of the Society, recalls evacuating the site he knew as “Bully Fen” (it had an assortment of names). With diggers and demolition all around, the gardeners were driven in on Saturday mornings over the summer to water their crops before their September eviction. “We became this island of life,” Harton (pictured above) recalls. “All of the foxes, all of the wildlife came to our site. It was teeming with life.”

Nearly 70 gardeners had plots there. Some gave up, including a man in his 90s, who left behind his gardening boots and diary. But most of them adapted. The London Development Agency, now defunct, which was responsible for providing alternative locations for all users and occupants of the Lower Lea Valley land obliged to move, first found a temporary space for the allotments to the north of the Park in Waltham Forest, where some remain.

But the commitment at the time, in line with specific laws relating to allotments, was for them to be offered a new permanent home within the Park at least as good as what they were losing. In 2016, many of the gardeners moved to such a spot, now known as Pudding Mill Allotments at the Park’s southern fringe, provided for them by London Legacy Development Corporation (LLDC), the mayoral body which has been responsible for the development of the Park and its environs since just before the 2012 Games.

Lying next to the Waterworks River, a tributary of the Lea, and railway lines that help give Stratford its super-connectivity, it did the job. The gardeners knew at the time that adjoining land was earmarked for housing, but weren’t concerned. On the contrary, Harton says the prospect of becoming embedded within a residential community was welcome. And since digging themselves in they’ve already seen more than their crops come out of the ground.

On the other side of the tracks and on both sides of the water, the buildings of the new University College London campus have risen from the Lower Lea Valley earth, forming part of the emerging East Bank culture and education complex and augmenting the neighbouring London Stadium and Aquatics Centre and Anish Kapoor’s intestinal Orbit tower, landmark features of what is now called the Queen Elizabeth Olympic Park. None of that perturbs the gardeners either.

But over the summer, their contentment was disturbed. In August, the LLDC, which is the planning authority for the Park, submitted outline proposals to its planning decisions committee for housing blocks that are bigger and taller than the allotment holders had been expecting in a scheme called Bridgewater Triangle.

For gardeners, of course, sunshine and daylight are essential. Harton and his Society colleagues say the plans as they stand would have a seriously harmful effect on them, with the housing casting large amounts of shade. Then there is the matter of the original re-provision commitment. “We see what’s happening here as an unmitigated dilution of that long-term promise,” Harton says.

The LLDC begs to differ. A spokesperson says it accepts that under the plans there will be “some overshadowing of the allotment site, particularly in winter,” but that its studies of the future buildings’ impacts show there would be “good access to sunlight” in spring and summer. The gardeners, though, say an assessment they commissioned made a less optimistic evaluation. Another of them, Dan Hayes, contends that “some areas of the site will no longer be able to be cultivated”. 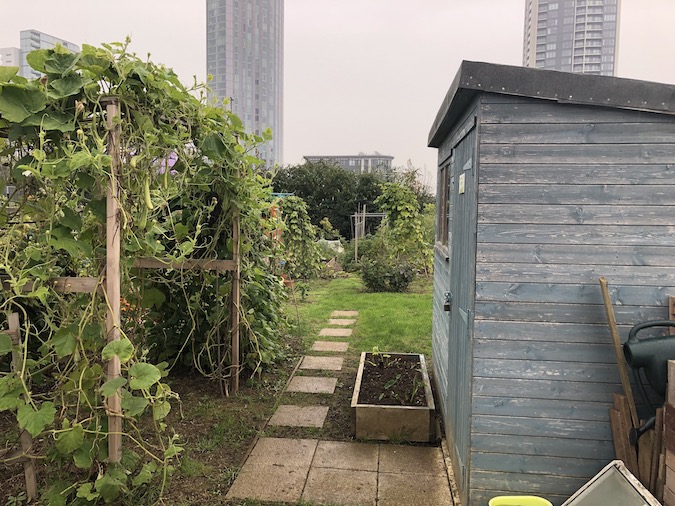 There have been engagements between the two parties about the issue, and the Society is a member of the Park Panel, an LLDC forum through which community bodies, residents and businesses based in the Park or the slightly larger LLDC area have input into the the Park’s evolution. However, a third Society member, Jane Hatt, thinks previous explanations about their need for light have not been properly taken into consideration. Harton says they would like what he calls “a real conversation” about the impacts, starting with finding “an agreed measure” of what the development’s effects would be.

The LLDC is confident it is abiding by its own planning policies, pointing out that it first secured consent for developing the space at Pudding Mill back in 2012 as part of its huge Legacy Communities Scheme post-Games masterplan application.  It is understood to disagree with the gardeners that the development would be in breach of its own Local Plan, adopted last year. Furthermore, amendments have been made to that bedrock 2012 planning consent.

A big reason for that was the precursor of East Bank, Boris Johnson’s Olympicopolis. The then Mayor’s post-Games idea of creating a cluster of arts and educational institutions, much of it on a pencil of land beside the Aquatics Centre dubbed Stratford Waterfront, meant taking up space formerly earmarked for housing.

In response, the LLDC is producing further masterplans with a view to making up the difference. In addition, Sadiq Khan’s policy of wanting an overall 50 per cent of new homes built on public land, which includes the LLDC’s, being “genuinely affordable” must be accommodated. The upshot is that the buildings beside the allotments would, under the Bridgewater Triangle plans as they stand, rise to eleven storeys.

There is, then, a tension – which Harton, Hays and Hatt very fairly recognise – between the two desirable goals of maximising the supply of affordable homes and maintaining the allotments in their present green and verdant state. Perhaps a resolution can be found, as both sides profess a readiness to talk and listen, and the LLDC will not finalise its plans until it has found a developer – not being one itself – with which to form a Transport for London-style joint venture.

Reconciling conflicting good objectives is, of course, part and parcel of the planning process (and this one between housing and allotments is not the only example in London at the moment, by the way). But this scenario has the additional and site-specific dimension of the obligations the gardeners believe the Park authority is still under to more than compensate them for their 2007 eviction.

That factor, in turn, forms a strand of the much bigger and broader debate about who has lost and who has gained from the massive regeneration of the Lower Lea Valley for which the Games were such a potent catalyst. Expect it to get louder as the tenth anniversary of London 2012 draws near.

Dave Hill, publisher and editor of On London, is completing a book about the history of the Queen Elizabeth Olympic Park to be published early next year.