Skip to content
Despite the hammering taken by some of its key sectors, the capital is doing more than anywhere else to keep the national boat afloat
Dave Hill

The pandemic has hurt the capital more than it has other regions and nations of the UK by a number of significant measures. The highest “excess death” rates in the country, for example, are overwhelmingly concentrated in London’s boroughs and London has seen larger increases in unemployment than anywhere else.

Yet new government estimates for economic activity during April to June last year, when the first wave of the pandemic was crashing across the country, suggest that by that yardstick London has got off relatively lightly compared with the rest of England, Scotland, Northern Ireland and Wales.

Economic growth defined as gross domestic product (GDP) plunged into negatives everywhere, of course, but London’s appears to have plunged less than happened everywhere else. In that April-June period, London’s growth was down by 16.3% compared with the same period in 2019, the smallest such fall in the entire UK. See ONS graph below. 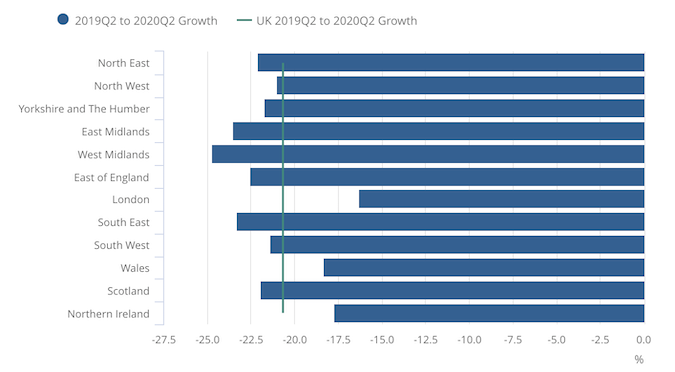 An obvious question is why that should be, given the devastation the coronavirus has caused in Central London, with the retail, hospitality and cultural sectors, so crucial to London’s economic performance in normal times, taking such a massive hammering.

A possible answer seems to lie in the breakdown of the GDP data to show what has happened in the main industrial sectors in each region. Go to Section 4 of the ONS summary page ,and call up London from its interactive chart (figure 5). 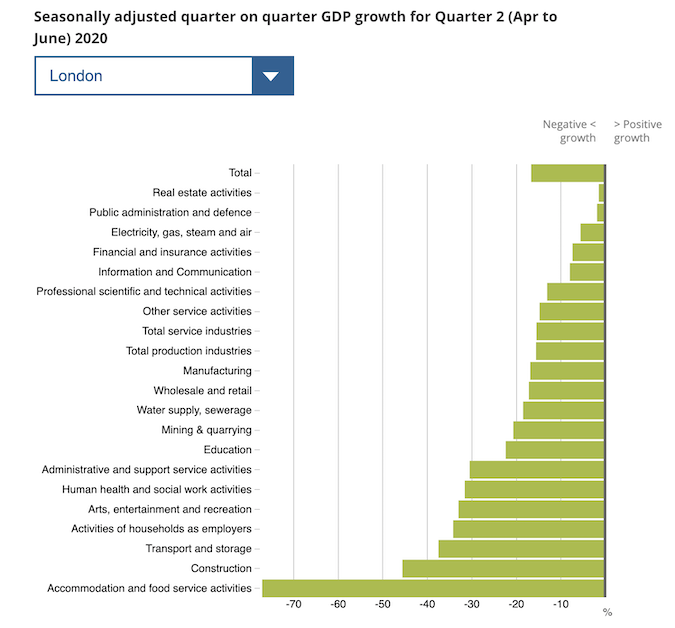 You will see that while the accommodation and food services and arts and entertainment sectors (and also construction) saw massive shrinkages, those in financial and insurance services, real estate, information and communication and other service activities were far more resilient and explain why London’s overall negative growth has been less bad than the rest of the UK’s despite the huge damage done to other parts of the city’s economy.

It seems logical to assume that those London industries have held up better because they are far more adaptable to remote and home-based production than those that have been badly hurt.

Once again, it appears, some of the things about London that attract the most populist opprobrium – “the bankers”, “the media” and so on – are contributing the most to the nation’s economy, in this instance by doing the most to limit the damage being done to it by Covid-19.

OnLondon.co.uk has been providing in-depth coverage of the UK capital’s politics, development and culture since February 2017. It depends greatly on donations from readers. Give £5 a month or £50 a year and you will receive the On London Extra Thursday email, which rounds up London news, views and information from a wide range of sources, plus special offers and free access to events. Click here to donate directly or contact davehillonlondon@gmail.com for bank account details. Thank you.