Merton is one of London’s quieter boroughs, despite the two biggest parties fighting close battles for control over it for many years. Perhaps that is why the council’s recent approval of three estate demolition and rebuild schemes has at least appeared to have been granted without any conspicuous protests being raised.

The estates in question are Eastfields and Ravensbury in Mitcham and High Path in Wimbledon, all owned by housing association Clarion. Together they presently comprise around 1,250 dwellings, which are to be replaced by around 2,800 new ones plus retail, leisure, office, work and community space.

Clarion’s website says that “crucially” all current residents will be rehoused “in homes of of an appropriate size, dealing with existing overcrowding” and that this will include 200 for current resident homeowners “at no additional cost on a full freehold or leasehold basis” – an unusually good deal. Clarion also says the £1bn redevelopment will produce hundreds of construction jobs a year, plus training and apprenticeship opportunities.

How did these proposals come to be passed with apparently so little conflict? Well, some people on Twitter and in subsequent correspondence have insisted that appearances are deceptive in this case. They have claimed that consultation procedures have not been as satisfactory as Clarion and the council say and that the views of some residents at least have been ignored, including by councillors who represent them.

Certainly there have been expressions of unhappiness from people who live on the Ravensbury, which the Clarion site tells us comprises 192 houses and flats built in the 1950s. A You Tube clip brought to my attention, published three years ago, shows a meeting that took place between members of the estate’s residents’ association and Mitcham & Morden MP Siobhain McDonagh. Have a watch. Whatever the rights and wrongs of the issues being discussed, the atmosphere is not harmonious.

It’s still interesting to me that I couldn’t quickly find local media reporting unhappiness about the three Merton schemes or politicised campaigning web content about them, as is common in other parts of the city. In the latter case, perhaps that is partly because the regenerations are not to be of properties owned by the council (although they were until the stock was transferred to housing association control eight years ago, following the necessary vote) meaning it’s too late to make the “privatisation” objection. The very fact of their being in low-profile Merton might have something to do with it too.

Both Clarion and Merton draw particular attention to consultations of residents about all three schemes, a process they date from the summer of 2013. Recent consultation documents regarding Eastfields are on Merton council’s website here, regarding Ravensbury here, and regarding High Path here.

An analysis of the results for an Eastfields consultation conducted in February and March 2016 is here. The estate contains 465 dwellings. The consultation produced 73 responses from people living within Eastfields. The graph below illustrates what those responses were: 50 were for “entire redevelopment” of the estate, two favoured a “partial redevelopment option” and 17 wanted the refurbishment of the existing properties.

An analysis of the results for Ravensbury consultation for the same period – February and part of March 2016 – is here. In this case, there is an illustrative graph only for “all respondents”, a group which includes local businesses and others (perhaps because the estate is a small one). In the document’s own words, this shows that there is “little appetite for regeneration of the estate”. 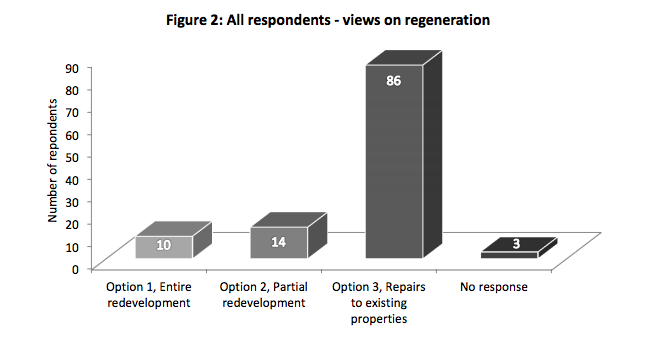 And thirdly to the 608-dwelling High Path estate consultation analysis, for the same period as the other two estates. It is here. In its case a graph illustrating the views of estate residents only shows that 41 respondents favoured “entire redevelopment”, 24 preferred “partial redevelopment”, and another 24 went for refurbishment only. 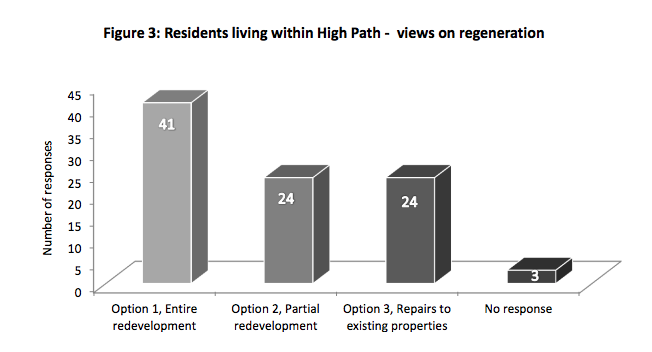 These were Stage 2 consultations, conducted by the council. There’s been a subsequent Stage 3 consultation phase, which was conducted by Clarion. And, as ever, there are many further dimensions to this whole story. Looking into those is for another day.

Small closing fact: Sadiq Khan provided Clarion with £15m from his 2016-21 investment programme for its Merton projects. If you were wondering where that warmly-welcomed £3.15bn has been going, there’s part of your answer.