London has had a rough two years since the pandemic started. The capital has been at the forefront of successive waves of Covid, commuters and tourists have stayed away, and Transport for London seems to be being kept alive by government in much the same way that a mouse is kept alive by a bored but malevolent cat.

In some of the city’s bleaker moments commentators have wondered whether it will ever recover – some doing little to disguise their glee. At the beginning of last year, decline enthusiasts seized on an analysis of Labour Force Survey stats, which estimated that London’s population might have declined by 700,000 – nearly eight per cent – since the beginning of the pandemic, mainly as a result of foreign workers leaving the capital. Would these workers ever come back? Would the city ever recover?

New statistics out this week from the Office for National Statistics suggest that, while employment of foreign workers in London has fallen, any exodus has been a trickle rather than a flood. Between June 2019 and June 2021, payroll employment fell by around 110,000 in London. Broken down by nationality, employment fell by 40,000 for UK nationals and by 85,000 for European Union nationals, but rose by 15,000 for other foreign nationals.

The chart below tracks employment numbers compared to June 2019. Across the country, UK and EU employment has fallen while employment of people from the rest of the world has risen. The switch from EU to broader international immigration reflects the UK’s new immigration regime, introduced at the beginning of 2020, which gives EU citizens the same status as people from other countries. 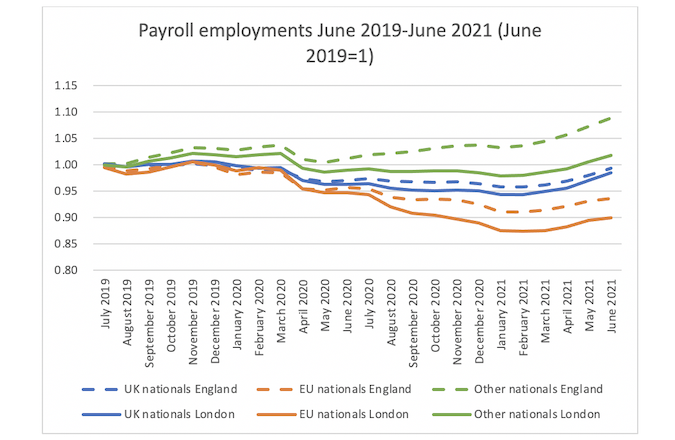 The trends are similar in London to the rest of England, but the falls were deeper and steeper in the capital and recovery has been slower, as industries such as hospitality have struggled to emerge from the pandemic. But the changes are much less dramatic than previous estimates suggested. Even in the first year of the pandemic only 100,000 European workers left employment, and by spring 2021 the trends were being reversed for all groups. EU worker employment increased by 20,000 between January and June 2021.

There are some striking differences between sectors too, some more surprising than others. The sector with the steepest job losses, hospitality, saw a reduction of 30 per cent in employment of EU workers. It remains to be seen how far these numbers will rise again as London’s commuters and tourists return, and whether new jobs will be taken by UK, European or other overseas workers. Towards the end of last year a staffing crisis hit hospitality, but the government has ignored calls to make work permits available for more roles in the sector.

Other areas with sharp EU job losses included administration and arts, entertainment and recreation. In construction, on the other hand, the EU workforce grew by 12 per cent between 2019 and 2021, and the number of other international workers by 15 per cent, while the UK national workforce remained unchanged.

We should not place too much store by these figures. They estimate the number of people employed using HMRC payroll data, so they are not precisely equivalent to job numbers, still less to population numbers. But they do give an indication of the direction and scale of change.

Can we conclude anything about population numbers? At a push. If we take UK nationals out of the picture and make the (fairly bold) assumption that the ratio of population to payroll employment for the EU and international workers was roughly the same in 2021 as it was in 2019, it looks like London’s foreign national population might have dropped by around 100,000 in the two years to June 2021. That is a big drop in a city used to net international immigration of 80-100,000 people every year, but it is a lot a lot less than some estimates and it looks as if London is already well on the way to making up lost ground.

Two years ago, I suggested that the shift to non-EU immigration would favour London, all other things being equal. All other things have certainly not been equal, but London’s loss of overseas workers to date has been in line with the colossal international disruption we have seen over the past two years. As we recover and our global connections re-open, London’s growth may once again be turbo-charged by international migration.