People are starting to come back to Central London, even if caution about rising case numbers, new variants and the onset of summer holidays mean the recovery is slow burn rather than big bang.

The graph below compares Transport for London (TfL) data on use of contactless and Oyster cards to tap in and out of stations on three sample days, according to different types of station (more detailed data and the station typology can be seen here). The days, chosen by me, are the last Thursday in July this year and last year, and the last Thursday in February last year. 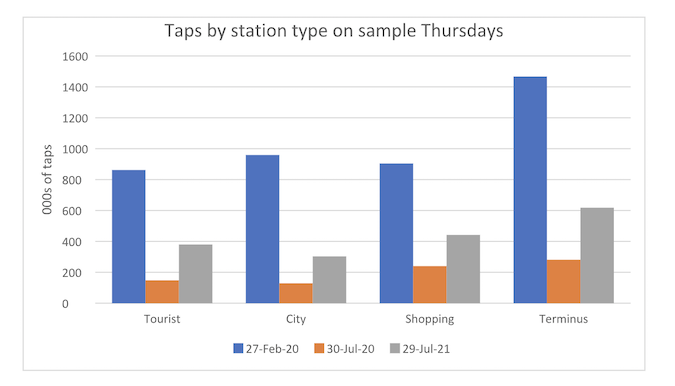 The change between July 2020 and July 2021 is striking. Each group of stations saw around twice as many taps at the end of last month compared to the previous July, when restrictions were similarly relaxed, with a slightly stronger recovery for ‘City’ and ‘Tourist’ destinations, though ‘City’ station usage (which includes Canary Wharf, Holborn and Clerkenwell) remains only a third of pre-pandemic levels.

Comparisons with February 2020 show we are still a long way from business as usual, and it will be interesting to see whether change accelerates in September. But the overall picture looks positive for those who want to see people – the lifeblood of Central London – return to its streets, and is in line with the “organic” return to cities that James Forsyth wrote about in The Times last week.

However, there could be bumps in the track ahead. One relates to human behaviour. Like many people, I have found my recent train and Tube trips a pretty pleasant experience. I’ve had a seat and not been too close to other people, even if wearing a mask is a minor spec-fogging inconvenience.

The closer we get to pre-pandemic levels of loading, however, the closer we will get to crowding levels that we find uncomfortable. It’s hard to say in advance what these will be – standing room only, shoulder-to-shoulder, armpit-to-nostril? – and tolerances will vary, but I suspect each of us could reach a tipping point where we no longer feel so happy using the Tube, however low Covid cases may be.

More staggered commuting hours may mitigate crowding. And we can expect some reduction in demand from increased working from home, though if everyone works from home on Monday and Friday it will do little to ameliorate crowding midweek. But I suspect there will be a self-regulating brake on levels of Tube usage over the next few years at least, and that brake will apply itself at a lower level than before the pandemic.

The problem will become a whole lot worse if Transport for London’s funding deal, still being thrashed out with government, forces cuts in service frequency and capacity, as government has suggested it might. A recent national poll suggested that 23 per cent of people anticipate using public transport less, with most of those expecting to use cars more. In London, congestion, the soon-to-be enlarged Ultra Low Emission Zone and parking charges may make that less of an option. But squeezing services could increase crowding, and in turn drive more people away from public transport – maybe to walk or cycle, but maybe just to stay away from Central London altogether.

TfL needs a funding deal that recognises how precarious London’s recovery could be, and how easily service cutbacks could push the Tube into spiral of overcrowding, falling passenger numbers and falling revenues. This means looking beyond reliance on fares for the next few years at least, to run the system as a vital amenity for urban recovery, rather than a commercial service to customers. If the government wants people to come back into London and other city centres, it needs to support public transport systems that marry environmental sustainability with economic vitality.

Richard Brown is a freelance writer and consultant who has worked for an array of major London organisations, including Centre for London, the Greater London Authority and the London Development Agency. Follow Richard on Twitter. Photo: Piccadilly Circus ticket hall.