Skip to content
The news looks good, though it could be that some of the figures create a misleading impression
Richard Brown

As autumn sets in and Covid case numbers drift upwards, there is some good news for Londoners. Having been hit hardest by the first wave of infections, the capital now has some of the lowest case numbers. On 18 October, out of 315 English lower tier (unitary and district) councils, the ten with the lowest case rates were all London boroughs (except where indicated, all data in this article have been downloaded from the excellent Government dashboard).

This isn’t to downplay the terrible effect Covid has had on London. The disease has already killed more than 20,000 people in the capital, and has had a particularly brutal impact on poorer and disadvantaged communities. However, unlike March 2020, when cases shot up in the city and widespread urban flight was predicted, today you are safer from Covid living in Inner London than almost anywhere else in the UK.

This is good news, but it’s not immediately clear why London cases are so low. While the capital has the highest levels of antibodies according to the latest Office for National Statistics (ONS) survey, it also appears to have the lowest vaccination rates. The ten English lower tier authorities with the lowest vaccination rates by 14 October were all in London, and are many of the same boroughs that also have low infection rates. I’ve been wondering how we can account for this, without making spurious assertions about vaccine effectiveness.

Vaccination is not the only way to acquire immunity, so Londoners’ early exposure to the virus will have made a difference. London’s cumulative case numbers are equivalent to around 12.5 per cent of the population, which is higher than the other southern English regions, but lower than the Midlands and North. But in the early days of the pandemic, most cases were untested and unreported unless people became seriously ill, so London’s total cases have almost certainly been underestimated. By July 2020, 13 per cent of working age Londoners were already estimated to have been exposed to the virus, twice the national average.

However, there are also issues about how vaccination rates are calculated. Most Covid statistics use the 2020 mid-year population estimates as their denominator, but vaccination rates use the National Immunisation Management Service (NIMS) database. Reputable commentators have suggested that this database, which has been credited for supporting the rapid roll-out of vaccines, tends to overestimate populations of working age adults – particularly young adults and students, who are most mobile. Using ONS mid-year estimates for 2020 rather than NIMS figures makes a big difference to vaccination rates in London, as shown in the chart below, which shows the position as of 12 October. 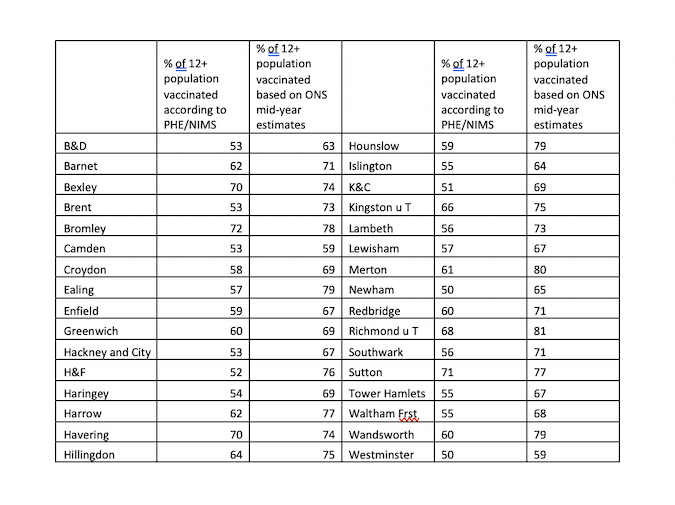 (A side note: might the ONS mid-year estimates from 2020 also be wrong? They probably are. Most commentators believe London has lost population over the last year, though estimates vary wildly, from Professor Jonathan Portes’ estimate that around 700,000 people may have left the capital, to the GLA’s more cautious projection that around 100,000 people have done so. If we reduced London’s population by a pretty extreme ten per cent, or around 900,000 people, both vaccination and case rates would be higher, but not dramatically so – though the effect would be greater if population loss was concentrated in the Inner London boroughs.)

What does this all tell us? The first thing, which many of us have learnt over the past 18 months, is to be careful to interrogate statistics, asking what story they are being made to tell and whether there are other stories that might also fit, particularly where there seem to be dramatic differences between places.

The second is to ask why local vaccination rates are being published in ways that seem to make take-up look artificially low in places with younger populations. This might seem trivial, or even a useful nudge for the young and for people in vaccine-hesitant communities to get their jabs, but using questionable data for righteous ends can be toxic. There are enough scurrilous rumours about vaccination effectiveness circulating without allowing people to draw hasty conclusions from the fact that the places with the lowest case rates are also those that appear to have the largest proportions of unvaccinated people.

The figures for deaths in council areas are seven day case rates by date reported, and the deaths attributed to Covid in the capital are defined as those where Covid has been mentioned on the death certificate, as of 14 October.