Take a stroll around any London suburb and before long you’ll come across a pocket of land – a row of garages too small for modern cars, an overgrown gap of uncertain ownership nestled between houses, a sliver of broken concrete beside a railway line – which, with a little tenacity and creativity, could provide space for a new home or two. These sites exist in their thousands across London and are particularly abundant in the outer fringes of the city.

London itself is not very dense. Islington, with around 160 people per hectare, is the borough with the greatest number of people relative to its size. Bromley, with the smallest, has 22 people living in the same area. Compared to Paris and Madrid (neither of which could reasonably be described as unpleasant places to live), with figures of 213 and 286 per hectare respectively for the cities as a whole, it’s clear that London should be able to accommodate far more people than it already does.

In his version of the London Plan (the blueprint for London’s growth over the next ten years) Sadiq Khan set out ambitious targets for the delivery of new housing across the capital. Where the previous mayor, Boris Johnson, adopted a “blue doughnut” approach to planning, which capitulated to the Outer London, largely Conservative-voting, boroughs’ demands for more autonomy over planning decisions, Khan initially required those very councils on the edges of the city to do more to help deliver new homes. As an example of this new approach, Merton’s housing targets rocketed from just over 4,000 in the Johnson’s version of the London Plan to more than 13,000 in Khan’s – an increase of nearly 225 per cent.

For the first time, a key strategy of the Plan was the exploitation of small sites to help achieve overall housing targets. (Small sites, in this context, are defined as those providing up to 25 homes). Previous Plans had ignored the potential of such sites to make a significant dent in housing targets, largely because their capacity was so hard to quantify. Yet under the current Mayor this was to become an important component of the new housing strategy. In total, it required no less than 245,730 homes to be delivered on small sites over ten years—more than a third of the total housing target for London over that period.

To compel insubordinate councils to comply, the Plan included a controversial clause requiring them to adopt a “presumption in favour” of approval for small developments on sites close to stations or high streets, at the same time acknowledging that the character of some areas would need to evolve to accommodate London’s anticipated population growth.

Predictably, this was met with a hyperbolic response from Conservative politicians, with Andrew Boff, leader of the Tory group on the London Assembly, claiming that the policy amounted to “war on the suburbs”. Yet a less partisan analysis clearly shows that the Outer London boroughs are not doing nearly enough to combat the housing crisis. Even the government’s own, less ambitious, targets demonstrated that several of the suburban boroughs are falling short, with Havering achieving only a third of its target. 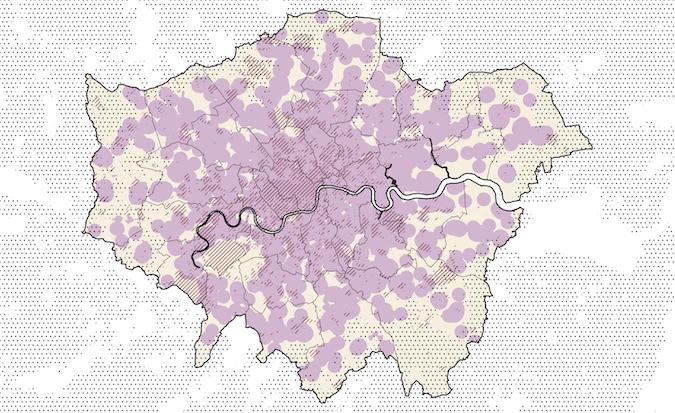 Map showing all areas covered by the new small sites policy (in pink) within the Intend to Publish version of the London Plan. Green belt land is shown dotted. (Source: RCKa)

Prior to becoming official policy, any new London Plan has to go through a process of public consultation and interrogation by an independent planning inspector. With Mayor Khan’s draft new Plan, this took place in spring of 2019, with a queue of homeowning suburbanites duly trotting up to City Hall to lambast the Mayor’s proposals. Complaints were raised about the complex statistical methods for calculating the capacity of Outer London to deliver new homes and familiar, tired accusations that a wave of “garden grabbing” would be unleashed were made. Inevitably it was the least dense boroughs – and therefore the ones with the greatest capacity for growth – which pushed back hardest against the Mayor’s proposals.

The outcome of the examination was a resounding rejection of the small sites policy by the inspector, who called for its wholesale removal. A recently as November the Mayor rejected this call, claiming that London could indeed “deliver those homes within London’s boundaries with no development on the Green Belt” (the latter stance, by the way, was something else the inspector had recommended the Mayor reconsider). However, when the Mayor’s final version of the Plan appeared in December, the small sites policy was almost entirely gone – and with it the associated housing targets. In some cases the numbers had been slashed by half. Across London, this resulted in a total reduction of 125,000 potential homes.

What was the reason for this extraordinary change of heart? With an election looming, perhaps the Mayor was hopeful of making a political play for support in those boroughs currently holding fast against the red tide? After all, eight of the ten biggest reductions for small sites targets were in non-Labour voting boroughs, the same number that voted Conservative in the 2016 mayoral election. Perhaps it was felt that this policy risked holding up adoption of the Plan? That seems possible, though recent criticism by secretary of state for housing Robert Jenrick suggests that the government considers the Plan not to be ambitious enough. In his letter to the Mayor, Jenrick also objected to the Plan’s emphasis on building flats rather than family houses – something that small sites tend to deliver.

The idea that the suburbs continue to represent a bucolic escape from the grime and overcrowding of Inner London has long been anachronistic. With home ownership in the central boroughs now out of reach for most, Outer London is increasingly proving an acceptable compromise between commuting and housing costs. Change in the character of Outer London is inevitable as the city adapts to growth, yet in reality even the more ambitious small sites targets of the Plan would hardly have resulted in noticeable change in the character of suburban neighbourhoods. Dividing large houses into flats, small-scale development on infill sites, utilising scraps of redundant land and above shops: all of these count against the figures, and when spread across a wide area would barely be noticeable, even with the higher targets.

The claim that suburban boroughs are unable to deliver their fair share of the homes is preposterous: under the latest, less ambitious, version of the London Plan, Hackney – with a total area of 1,900 hectares – is, over the next decade, expected to deliver 6,580 homes on small sites compared to 2,950 in Hillingdon, despite the latter having an area six times larger. Inevitably some standards must change: policies that require a minimum distance between windows of no less than 20 metres, as is the case with many suburban boroughs, are no longer fit for purpose in a rapidly densifying city. As has consistently been pointed out by campaign group Create Streets, many of the older homes considered desirable today would not comply with contemporary planning policies.

The removal of the small sites policy from the London Plan represents a betrayal, not only for those citizens of London desperate to get a foot on the housing ladder but also for all of those small businesses so vital to the city’s construction economy: builders, developers and design professionals, for whom the risks inherent in the planning and delivery of small-scale developments are often too great to justify. With the last-minute extension to the Mayor’s term due to the coronavirus we can only hope for the reintroduction of the small sites policy so that we can get on with delivering the homes London needs.

Russell Curtis is director, RCKa architects, a Mayor’s design advocate and a trustee of the Architecture Foundation. He also took the photo of disused garages in New Barnet at the top of this article. Follow Russell on Twitter.

OnLondon.co.uk is doing all it can to keep providing the best possible coverage of important London issues during the coronavirus crisis. It now depends more than ever on donations from readers. Individual sums or regular monthly contributions are very welcome indeed. Click here to donate via Donorbox or contact davehillonlondon@gmail.com. Thank you.