One of the least lamented lost bits of London is the cockpit. Fighting with cockerels – with rampant betting – was the sport of the day in Tudor times and lasted until it was made illegal in 1833. Every town had a cockpit and London, quite a few.

One of the most notorious was located between Old Queen Street and St James’s Park in Westminster, now commemorated with its own street sign, Cockpit Steps. Although the pit is long gone, these steps are more or less as they were when it was in regular use. It was known as a royal cockpit because it was frequented by aristocracy as well as “lower” classes.

The site is opposite a pub of more recent vintage called The Two Chairmen. That is appropriate, because many of the spectators at cockfights would have been borne there in a sedan.

The pit’s location is a bit surprising as it was only a few hundred yards away from another, genuinely royal, cockpit built by Henry VIII after he had moved his royal palace from nearby Westminster Abbey to Whitehall. It was located in an octagonal building between Downing Street and Horseguards Parade, the remains of which still exist. 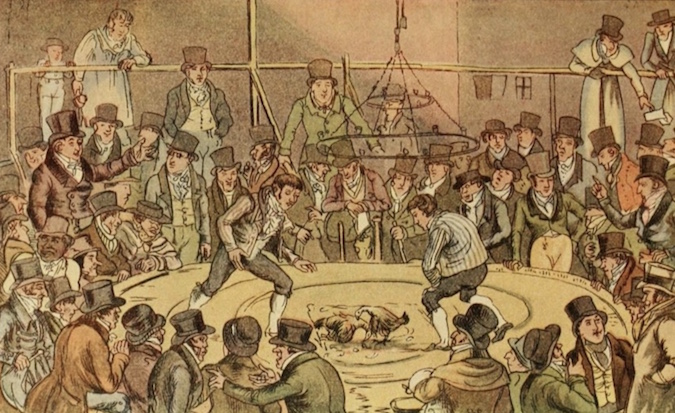 A contemporary account of a cockfight on 18 June, 1710 near Gray’s Inn by Zacharias von Uffenbach describes a typical scene thus: “The people, gentlefolk as well as commoners, act like madmen and go on raising the odds to 20 guineas and more. As soon as one of the bidders calls ‘done’ . . . the other is held to his bargain. Then the cocks are taken out of the sacks and fitted with silver spurs . . As soon as the cocks appear the shouts grow even louder and the betting is continued. When they are put onto the table, some attack at once while others run away from the rest and try in their fright to jump down from the table among the crowd.”

Cockfighting was a brutal sport, but it operated within very strict and often complex rules which are credited with being an important staging post in the development of rules for all sports. Birds paired against each other had to be of equal weight and properly reared, starting with the lighter weights.

The arena at Cockpit Steps appears to have been moved at a later time to Tufton Street just south of Westminster Abbey, but the road sign at the top of the steps still gives passersby a rare hint of what life was like in bygone days.

Read all of Vic Keegan’s Lost London pieces via here.