In January 1731 the seeds of a breakthrough in journalism were sown in the unlikely setting of the gatehouse of an old priory in Clerkenwell. It was from there, at St John’s Gate, that Edward Cave launched a monthly publication called The Gentleman’s Magazine, which has a good claim to being the first of its kind in the English-speaking world.

There were other periodicals around, but they limited themselves to particular subjects. The Gentleman’s Magazine broke new ground by covering a wide variety. Cave actually invented the very word “magazine”, which was derived from a similar one in French, meaning “storehouse”. The Gentleman’s Magazine lasted until 1922 – nearly 200 years, 50 of them while based at the gatehouse – and spawned numerous imitations across the world.

The very first issue was a hit, despite being a bit hard to digest. Stories, obituaries, appointments and many other items were vacuumed up from other sources and packed like sardines into 50 pages with no pictures. You can read it here, if you have a few hours to spare. 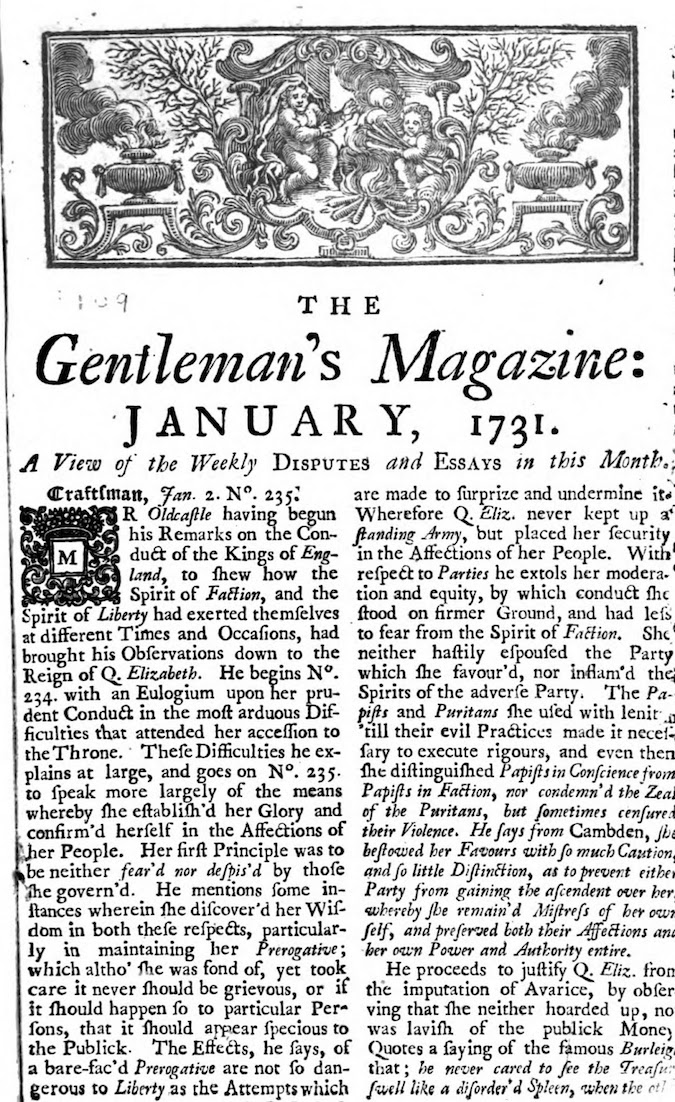 It contains items lifted from specialist journals such as the Craftsman, the London Journal, Fog’s Journal, the Grub Street Journal and the Weekly Register. There was a poem by Poet Laureate Colley Cibber accompanied by a panegyric to Cibber himself – sample line: “Sing a floreat to the laureate” – written by Stephen Duck, an agricultural labourer from Wiltshire who had been taken up by George II’s wife Queen Caroline. (In 1733 Caroline revived the post of governor of Duck Island in St James’s Park and gave it to Stephen, who became Duck of Duck Island).

Why was Cave able to do this? Because he exploited the weak copyright laws of the time by paying hardly anyone at all for their work. He had form for this sort of thing: the son of a cobbler, he attended Rugby School but was expelled after being accused of stealing from the headmaster.

But The Gentleman’s Magazine was also a major innovator in a different way. It began reporting what went on in Parliament at a time when – can you believe it? –  it was illegal to do so. His reporters would sit in the public gallery and later write up whatever they could remember. Being one of Cave’s House of Commons reporters, from 1741 to 1743, was among Samuel Johnson‘s first regular jobs. He even had a small room or garret of his own at the gatehouse.

The gatehouse building was already associated with illustrious figures. Richard Hogarth, a classical scholar, school teacher and father of legendary painter William Hogarth, set up a coffee shop in its east tower in around 1704. He conceived it as a haven for gentlemen to meet and converse in Latin. Such institutions were often called ”penny universities”, as you paid a penny for entrance and enlightenment. But enlightenment didn’t pay in Richard’s case and the enterprise, sadly, folded in 1707.

However, the greatest of all of the literary worthies who graced the gatehouse came earlier – William Shakespeare. He would have been a frequent visitor in his time, as the gatehouse contained the office of the Master of the Revels, who vetted every play performed in London in case any contained criticism of the monarch, Elizabeth I, or other seditious material.

The gatehouse, steeped in history, is well worth a visit. Dating from the 1540s, since the 1870s it has been the headquarters of the admirable English Order of St John, which is rightly proud of its medieval origins and monks who cared for sick pilgrims on their way to Jerusalem. Today, as well as offices, it has a fascinating museum and puts on guided tours. No Latin required.

This article is the 19th of 25 being written by Vic Keegan about locations of historical interest in Holborn, Farringdon, Clerkenwell, Bloomsbury and St Giles, kindly supported by the Central District Alliance business improvement district, which serves those areas. On London’s policy on “supported content” can be read here.