Skip to content
Taverns are said to have occupied the site since 1430, though a lot has changed above and below ground since then
Victor Keegan

The sign above the Cittie of Yorke in High Holborn says it all: “Established as the site of a public house in 1430.” This claim and the old fashioned lettering in which it is written immediately pull you inside. And you are not disappointed. After passing through a small but comfy snug, where there was once a small garden, you enter the cathedral of taverns.

The pub claims to have the longest bar in London (pictured below) and it is probably the tallest as well, flanked on one sidewall by giant vats, each holding up to 1,100 gallons, and on the other by a discreet chain of cubicles where lawyers from the nearby Inns of Court – and others with different motives – can have private conversations. Camra, the real ale organisation, calls it “a truly remarkable pub” providing “a self-conscious, romantic evocation of an Olde England”. 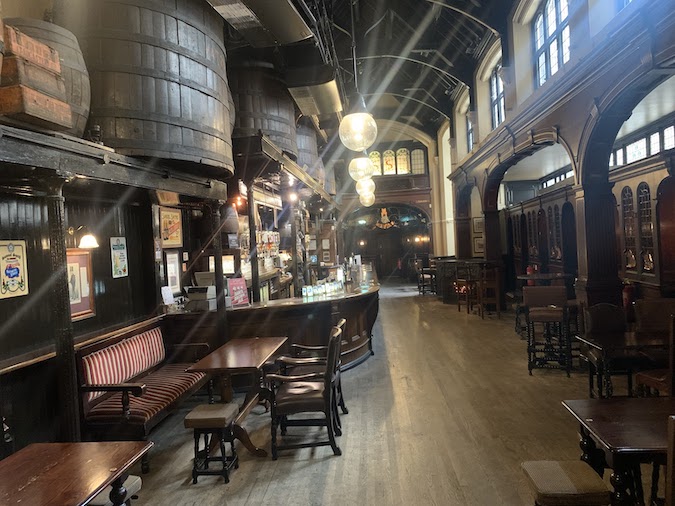 There are similar evocations nearby. The pub stands immediately next door to the entrance to Gray’s Inn, where at 7:50 pm every day, a curfew bell is sounded to warn inhabitants to put out their fires, just as in medieval times. Across the road, the site of  today’s Southampton Buildings was previously occupied by Southampton House, where lived the family of Thomas Wriothesley, Earl of Southampton, to whom Shakespeare is said to have dedicated many of  his sonnets. Its grounds were later a location for one of the ring of forts that Parliament built around London as protection against a feared invasion by Charles I’s army.

The pub has been called the Cittie of Yorke only since the early 1980s, following its purchase by its present owner, the Samuel Smith chain. The name is taken from a long-demolished 16th century pub which was situated on the other side of the road in Staple Inn. It was previously called Henekey’s Long Bar: Dylan Thomas wrote an instant poem during a visit to it in 1951. It has had other names in the past, such as The Queen’s Head.

Despite its appearance of being much older, nearly all the current building dates from 1923-24. Nonetheless, today’s pub has a cellar dating back at least to the 1600s that is today a working bar (picture below), and its statement about 1430 is an assertion of being among the oldest taverns locations in London. 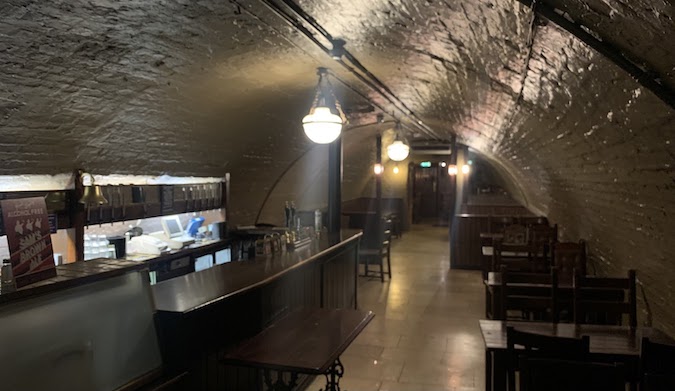 Of course, other pubs make such claims, with declared origins within a few years of each other. The Guinea in Mayfair says it has been an inn since 1423, though the present building only (only?) goes back to 1720. The Old Red Lion in St John Street, not far from the Cittie of Yorke, says it can trace its birth back to 1415 and has done some impressive research to to back that up.

There are plenty of other pubs, from the Hoop and Grapes at Aldgate to the George in Borough Market, that also have some grounds for saying they are among London’s oldest. Does a pub have to have remnants of the original building to qualify as one of the oldest, a continuous record of occupation or the same name, or is being on the same site all that matters?

This fascinating question might have to be resolved by a linguistic philosopher rather than a historian or archaeologist, because all contenders have experienced huge changes, major reconstructions and been put to multiple uses. For example, during the 17 Century, the Cittie of Yorke’s predecessor building hosted a coffee shop. The debate rolls on.

If retaining key parts of the original building is a requirement, there is – or was until recently – a candidate only a few hundred yards from the Cittie of Yorke, immediately on the left after passing Holborn Viaduct bridge. There, Museum of London archaeologists unearthed substantial remains of the Three Tuns pub which had its own micro-brewery and might, in a more enlightened age, have been preserved and rebuilt. Instead, it is now buried under a new office block.

Maybe what matters in the end is whether the pub looks the part, has the atmosphere and is imbued with memories and history. The Cittie of Yorke meets all those requirements.

This article is the eighth of 25 to be written by Vic Keegan about locations of historical interest in Holborn, Farringdon, Clerkenwell, Bloomsbury and St Giles, kindly supported by the Central District Alliance business improvement district, which serves those areas. On London’s policy on “supported content” can be read here.