Number 59 Lincoln’s Inn Fields has managed to avoid celebrity status apart from being next door to the home of Spencer Perceval, the only British Prime Minister to have been assassinated. But in the 19th century it was the head office of a remarkable Victorian experiment set up by a remarkable Victorian man.

It was a kind of pre-internet Wikipedia called The Society for the Diffusion of Useful Knowledge, which, between 1826 and 1848, spread knowledge about useful subjects not just to Britain but to a network of educators, scientific institutions and publishers all over the world.

Among its publications was the The Penny Magazine, which sold 200,000 copies in its first year, and was followed by the Penny Cyclopaedia and the Library of Useful Knowledge, which sold over 33,000 copies at sixpence a pop. When the Society closed in 1848, its founders said it was because the job was done. Others thought the admirable material was sometimes a bit esoteric for the working classes and lower middle classes at which it was aimed. But it was a remarkable experiment at a time when mass schooling did not exist, and it was influential around the world.

The Society was a secular organisation set up by many of the same people behind University College London, founded in opposition to Oxford and Cambridge, which admitted only religious believers. Its driving force was the remarkable Lord Brougham, also notable as an MP, a political reformer, a slavery abolitionist, an inventor and a Lord Chancellor 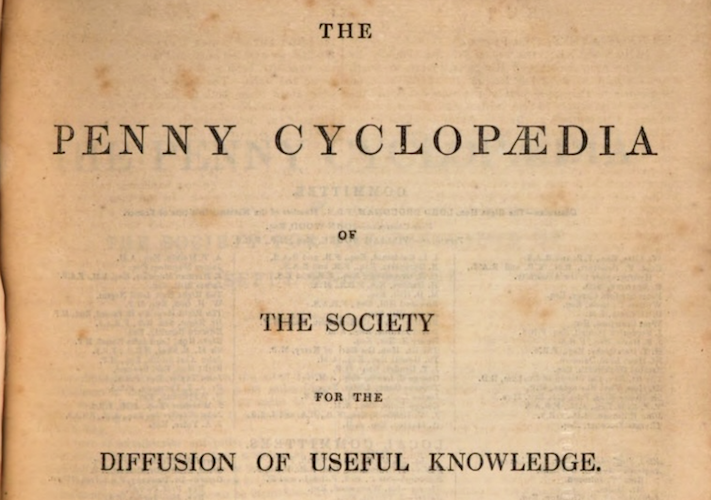 You might think this list of achievements this merited a of a statue of Brougham. But he hasn’t got one, at least not in London. To see one, you will have to go to the south of France, where there is a very large one of him in the celebrity resort of Cannes, which Brougham more or less invented as a tourist resort for him and like-minded folk to enjoy. There is a plaque in his honour on his London house, 5 Grafton Street, but as he lived most of his later life in Cannes, that doesn’t amount to much.

Brougham also invented the Brougham Carriage, which only needed one horse to pull it, instead instead of two plus coachman and groom. A later motorised version influenced General Motors and Ford, who used his name.

The Society for the Diffusion of Useful Knowledge was not without its critics. Religious groups complained about its secular nature and the book trade claimed that the society “have done, and are still doing, more to ruin the book trade than all the change of times, the want of money, the weight of taxes, and even the law of libel have accomplished”. You can’t please all of the people all of the time – even if useful knowledge is being diffused.