Britain’s first daily newspaper was published in London on 11 March 1702 in somewhat unusual circumstances: it was produced by a man who turned out to be a woman; it carried no news about England, only from abroad; and it didn’t offer any opinions, leaving its readers to make up their own minds.

The paper was called the Daily Courant and was produced at a house near the King’s Arms inn near Fleet Bridge by Elizabeth Mallet, who found it a good career move to pretend it was all done by a man. Women weren’t supposed to do that sort of thing in those days, although, curiously, the only paper which also claimed, less successfully, to be Britain’s first – the Norwich Post – was also run for a while by a woman called Elizabeth – Elizabeth Burges.

Elizabeth Mallet’s journal consisted of two pages, with foreign news on the front and advertisements on the back. It is not clear why she chose to report only foreign news, but it may have been that it was considerably cheaper than paying for home news. She was way ahead of her time in presuming that her readers had “sense enough to make reflections for themselves“. Not many papers today would follow that approach. 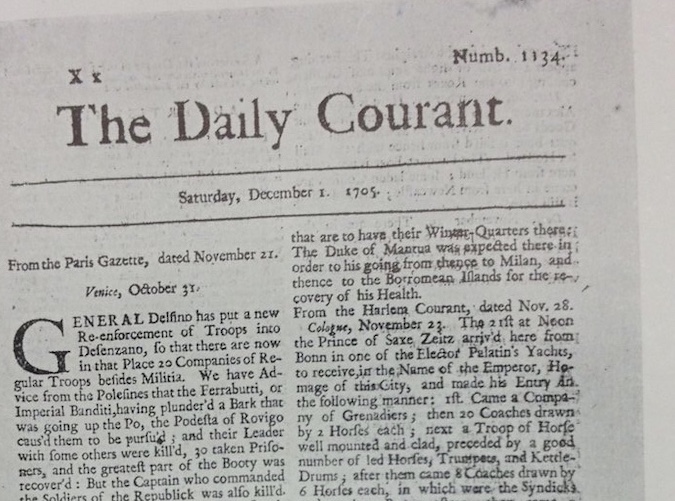 Mallet sold the Daily Courant to Samuel Buckley after only 40 days. He moved it to premises around Little Britain “at the sign of the Dolphin“. Buckley eventually became publisher of the Spectator. The Courant itself lasted until 1735, before being merged with the Daily Gazetteer.

There is a plaque by the side of the Leon café at Ludgate Circus marking the spot near the King’s Arms pub (or maybe in a lane behind) where the paper was first put together. It marks the birthplace of Fleet Street as the home of British newspapers.