It is difficult to believe that this spot in Walworth in the shadow of the Elephant and Castle was once the site of two spectacular leisure experiments.

In 1831, Edward Cross started the Surrey Zoological Gardens here, years before London Zoo was opened to the public. London Zoo is the oldest scientific zoo in the world, dating back to April 1828, but it didn’t open its doors to the public until 1847. Cross had owned a menagerie at the Exeter Exchange building on the Strand. The building was demolished in 1829, but many of the animals were eventually moved to this new home within the Royal Surrey Gardens.

They were kept in a large domed glass conservatory 100 yards in circumference with 6000 square feet of glass, housing cages for animals that included the first giraffe to come to Britain, tigers, lions, and even a rhinoceros. The Gardens, planted with exotic trees and plants, formed the background for large-scale entertainment spectaculars, such as re-enactments The Eruption of Mount Vesuvius and the Great Fire of London. 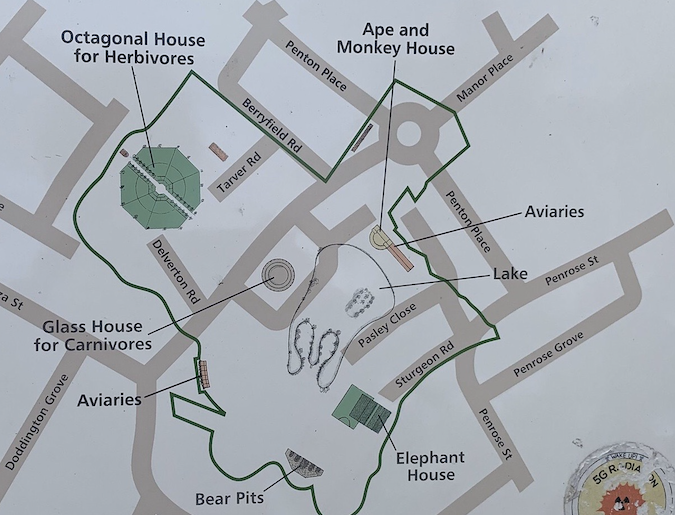 In 1856, following Cross’s death, the Gardens and the animals were sold and the new owners built the second of the ambitious projects on the site, the Surrey Music Hall. This occupied 15 acres east of Kennington Road, of which three comprised a lake. The hall could seat 12,000 spectators in an iron and glass emporium that was clearly influenced by the Crystal Palace in its original home in Hyde Park.

Among the entertainments was a four-day military festival held in 1857 to honour and raise funds for Mary Seacole, the extraordinary nursing heroine of the Crimean War. It was also used for promenade concerts and revivalist meetings, including some by a charismatic Baptist preacher Charles Spurgeon, whose services in the music hall at weekends attracted huge audiences. The first one, held in October 1856, was reported to have drawn an audience of 10,000 people, with many more outside unable to get in.

The Gardens were sold for the development of residential buildings in 1877, but a much smaller public park opened there in the 1980s. It is now called Pasley Park. Some of the local roads reflect the site’s history, such as Sturgeon Road, named after the evangelist, and Manor Place which references the original Walworth Manor on which the Gardens were built. Otherwise, nothing is left but grass. And memories.