As brothels go, Holland’s Leaguer must have been in a class of its own, even for Shakespeare’s time. It was located in the notorious Paris Garden, in a “liberty” free from the rule of the county of Surrey and the City of London opposite, situated on the southern side of the Thames, at the point where Blackfriars Bridge lands today.

You couldn’t miss the brothel, which was named after its proprietor Elizabeth “Bess” Holland. It was located in a former manor house once owned by Henry VIII’s third wife, Jane Seymour. It had its own moat and drawbridge (see engraving above) which could be pulled up to keep out undesirables, such as apprentices on their annual Shrove Tuesday rampages, and sometimes the police as well.

It was sited close to the Swan Theatre, which was the biggest of its day, seating – or standing – 3,000 punters, not all of them there just for the show.

The brothel was said to be based on “The Lovely Little Maiden” in Brussels, offering luxurious ambience, fine food and clean linen. All of this would have come in handy when Charles I tried to close it in December 1631. When his soldiers arrived, Holland apparently raised the drawbridge over the moat, causing soldiers to fall into the water. The brothel was besieged for a month, until it was finally closed in January 1632 causing Ms Holland to pursue her business elsewhere. How her customers reacted to being locked in a brothel for a month can only be guessed at. 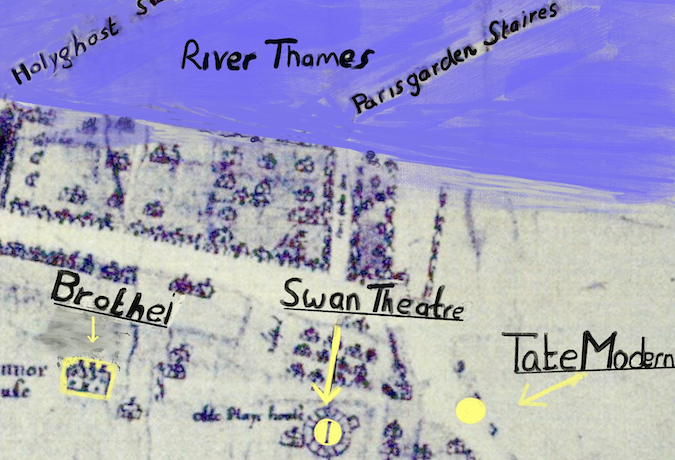 This brothel was also unusual in that it had a play written about it called Holland’s Leaguer, written by the improbably named Shackerley Marmion. It was staged in 1631 at the Salisbury Court Theatre near St Bride’s Church off Fleet Street and ran for six consecutive performances, making it one of the most successful plays of its time.

A contemporary court case shows that Shakespeare lived around Paris Garden for a couple of years after moving from north of the Thames in 1596, possibly in the area known today as Upper Ground. The case, in which William Wayte brought a restraining order against Shakespeare and others because he was in fear of his life, does not show Shakespeare in a favourable light.

If you stand on the streps of Tate Modern, the Swan Theatre would have been about 100 yards in front of you, where a new office block is under construction and the Holland Leaguer would have been a short walk to your rear. It’s name is preserved today in Holland Street.