Skip to content
Only one dwelling is known for sure to have had the nation's greatest writer living in it, and its site is now used for car parking
Victor Keegan

The green space between Noble Street and London Wall in the City of London – where land values are astronomical – is unusual. It has been empty for over 350 years. St Olave’s, the 12th century church which once stood there, was destroyed by the Great Fire in 1666 and, as consecrated ground, has been left vacant ever since. You can see it from a window in the Museum of London, which stands opposite. This would not merit any further comment except for one thing – it was the local church of William Shakespeare when he lodged quite literally across the road in Silver Street at its junction with Monkwell Street.

Shakespeare stayed with a French Huguenot family called the Mountjoys for a period between 1603 and 1605. It is the only place we know for certain that he lived, yet it is buried, plaque-less, in the underground car park on the other side of London Wall, whose construction destroyed the two streets. The house itself was another of the Great Fire’s victims.

Shakespeare’s time there has been known about for over 100 years, thanks to diligent American researchers Charles and Hulda Wallace. They came across a vital law case in the Public Records office in which Shakespeare was called as a witness in a dispute over a dowry with the Mountjoys. James Joyce even mentioned it in Ulysses: “Shakespeare has left the Huguenot’s house in Silver Street and walks by the swanmews along the river bank”. Yet it wasn’t until less than four years ago that a small tablet was put up in St Olave’s churchyard saying Shakespeare lived “near here”. Until then there was no indication that Britain’s greatest writer had been a local resident. Only in England… 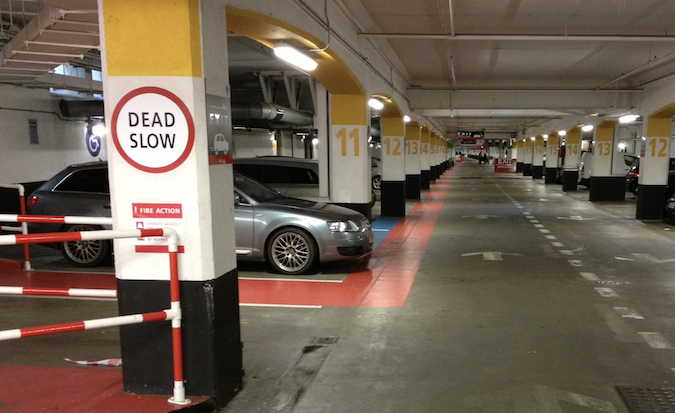 The plaque was probably a consequence of the publication of Charles Nicholl’s marvellous book The Lodger, which filled in a lot of fascinating background, including that some of the goings-on inside Shakespeare’s dwelling found their way into some of his plays. Nicholl points out that there is even a French herald called Mountjoy in Henry V, Act III. Professor James Shapiro, author of 1599 and 1606, two major books about Shakespeare, comments: “After finishing The Lodger it will be impossible to read Measure for Measure, All’s Well, and especially Pericles as before”.

Although the buildings and the roads have disappeared, it is still possible to sit in the abandoned churchyard of St Olave’s and stare across the busy thoroughfare of London Wall and wonder what might have been. The buildings may have gone, but the scenes from plays that were written here live on.