Skip to content
Though famously uncluttered, this Central London royal park has had its - ill-fated - monuments in the past
Victor Keegan

Since the lockdown I have started walking around the Royal Parks for an hour or two at dawn, when there is hardly anyone around. It is a wonderfully contemplative time and a temporary escape from the horrors of the virus. But Lost London is seldom far from my thoughts, not least when in The Green Park.

It is the sparsest of the Royal Parks, boasting no buildings apart from a few memorials. St James’s Park is a destination, but The Green Park, though lovely – especially when a million daffodils pop up in spring – is mainly somewhere you pass through, just as the Tyburn river flows underneath it.

It was not always so. There have been numerous edifices there in the past, including two ice houses (to cool Charles II’s  drinks, of course), a ranger’s house, lodges, a basin or pool, the Queen’s Library (for Queen Caroline, wife of George II) and a fountain (pictured below) designed by Edward Smirke, the brother of Sir Robert Smirke, architect of the British Museum. All are now gone.

But the most spectacular of all by a distance was a very large Temple of Peace erected in 1749 to celebrate the Treaty of Aix-le-Chapelle, which ended the War of the Austrian Succession embracing Britain’s War with France in the Americas. Under its terms, Britain gain Canada while France – which didn’t want the expense of maintaining Canada – opted for the sugar-based riches of Guadeloupe, exploited by the slave trade.

The peace may have been a success, at least temporarily, but, alas, The Temple of Peace was not. In 1749, during a grand firework display accompanying a specially-commission work by Handel – entitled Music for the Royal Fireworks – it was hit by a stray rocket. Ten thousand fireworks were being stored there. The temple exploded, killing three people and injuring many more. Nothing is left of it now, nor of the event, except for Handel’s music.

Green Park was mostly open fields until Charles II acquired the land, between St James’s Park and Hyde Park, and put a wall around it so he could walk freely between the two parks through what he called Upper St James’s Park. It was opened to the general public in 1826, during the reign of Queen Victoria, when the Queen’s Basin was filled in and all the buildings were demolished.

The reason The Green Park doesn’t have any flowers, apart from the daffodils, is attributed to the day when Charles II’s wife saw him collecting flowers for his mistress and ordered that all the flower beds should be taken up and no new ones planted. That would learn him.

The picture of the Temple of Peace at the top of this article, claiming to mark the fateful firework event, is a bit of a puzzle. The view appears to be from the Piccadilly end of the park, with Spencer House in the background on the left. However, Spencer House was not built until a few years later. An engraving of the same scene says it was drawn from the library of St James’s Palace, in which case the building on the left must be Arlington House, which stood on the site where Buckingham Palace was eventually built, with the pathway behind being today’s Constitution Hill. 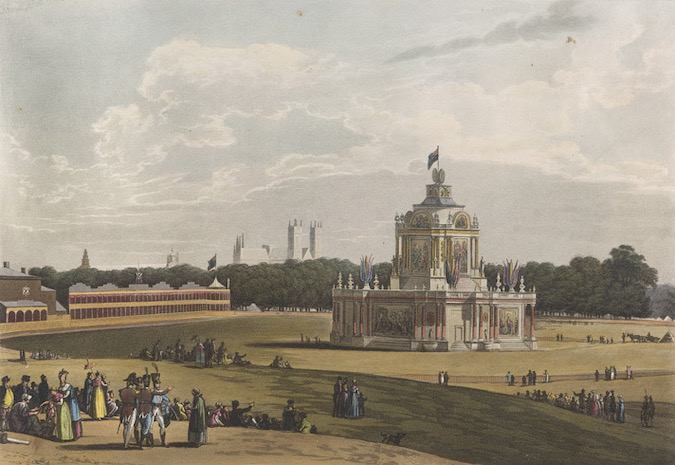 The Green Park has not been successful with events. In 1814 another large building, the Temple of Concord (pictured above) was built to commemorate 100 years of Hanoverian monarchs. That too burned down, and the remnants were sold at knock-down prices. No one can say that The Green Park is not part of Lost London.

All previous instalments of Vic Keegan’s Lost London can be found here. Vic’s Gems of London (an app for the iPhone. iPad or iPod) uses geo-location to take you to unusual places in the capital, telling you how many yards you are away from them. City Poems links classic poems to the London streets, statues etc that inspired them. Shakespeare’s London does the same for all the buried memories of the Bard’s life in London. Geo Poems geo-tags most of Vic’s poetry.