Skip to content
The future George IV created a rival royal court there, but not everyone was impressed
Victor Keegan

Imagine you are walking from Trafalgar Square towards Buckingham Palace in the late 18th century. There was no Mall or Admiralty Arch in those days, and the whole space from where the Institute of Contemporary Arts (ICA) is today right down to Marlborough House on the far right was taken up by Carlton House which, together with its gardens, spilled over the land occupied by The Mall today to the edge of St James’s Park. Its frontage spanned much of Pall Mall.

It was an extravaganza building in an age of extravagances, which gained notoriety from 1783 when it was occupied by George, Prince of Wales (later Prince Regent) until he was crowned George IV in 1820. A house, it was not – more like a mini-Versailles. George enlarged and embellished it, spending vast sums of money he hadn’t got in order to make it worthy of his name. He famously fell out badly with his father George III, and Carlton House became the centre of a glittering rival royal court to the one down the road. The prince even sketched out what his future administration would look like when his father died, packing it mainly with his aristocratic cronies. 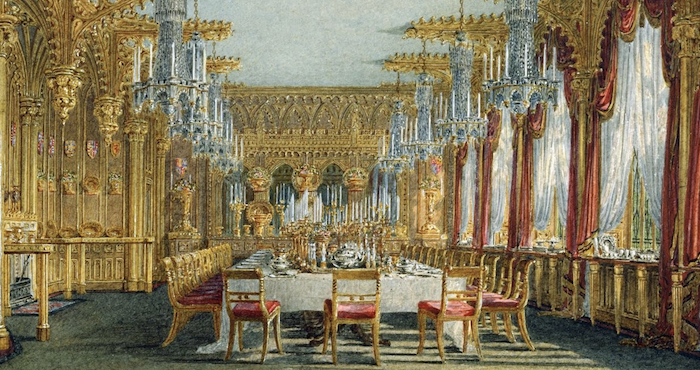 In May 1784, to celebrate the return to parliament of a controversial friend, the Whig politician Charles Fox, George had nine large marquees erected in the garden. Guests, mainly others Whigs, were entertained by four bands and plentiful wine, timed for when his father was proceeding in state along St James’s Park to open the new Parliament. Only the walls of Carlton House separated them – hardly the action of a future king trying to keep his distance from party politics. Later that year, when he secretly married Maria Fitzherbert, re-construction of the house was halted because George’s debts had reached an astronomic £250,000 in the currency of the day.

Carlton House has been described as “the most important house of its time” in Britain, but this was a political rather than aesthetic judgement. Robert Smirke, who designed the British Museum, thought it “overdone with finery” while Antonio Canova, the distinguished Italian sculptor who had extolled the praises of Waterloo Bridge, dismissed Carlton House as “an ugly barn”. That was just the outside. Inside was something else: room after room of opulent decoration and sculptures. In 1816, an inventory of the house revealed there were over 450 pictures in the state rooms and other parts of the house.

In fact, the Prince Regent never really liked Carlton House, not least because the entrance in Pall Mall was, how shall we put it, a bit too near his subjects. On his accession as king he dropped it to concentrate his overdraft on improving Buckingham Palace.

In 1828, Carlton House was pulled down to pave the way for the opening of John Nash’s Waterloo Place, complete with the Duke of York’s column, providing an entrance to Nash’s Regent Street. As with so many other London mansions, a lot of its stonework and contents were recycled. Most of the furniture, carpets and works of art found their way to Buckingham Palace and other royal residences. The portico of Carlton House was reused in the new National Gallery in Trafalgar Square – against the wishes of the architect William Wilkins – where the columns can still be seen.

Carlton House, originally erected by Lord Carlton in 1709, was rebuilt by Nash as Carlton House Terrace. Today, the north side of where it stood is an array of very handsome Georgian houses. If you view the same complex in the Mall from the ICA, looking towards the Palace, you will find that behind the mock columns, extending for over 100 yards, is a car park. How the mighty have fallen. For more detail about the history of Carlton House, see here.