Look at the less than imposing shops on London’s busy South Lambeth Road pictured above and let your imagination roam. Think of the sight and aroma of michaelmas daisies, poppies, scented stock, Virginia creepers, columbine, phlox and white jasmine – just a sample of the plants brought into this country for the first time by the inhabitants of a large house that was built on this site nearly 400 hundred years ago.

Meet the super-gardeners of 17th century England – John Tradescant and his son, also called John, who lived in that house (pictured below) and who voyaged around the world to change the face of horticulture in England. They also brought some of our best loved trees to England, including horse chestnut, tulip trees, magnolias, yuca and the bald cypress. Some experts credit them with introducing London plane trees and even the growing of pineapples. And, of course, the wandering plant tradescantia, which takes its name from them. 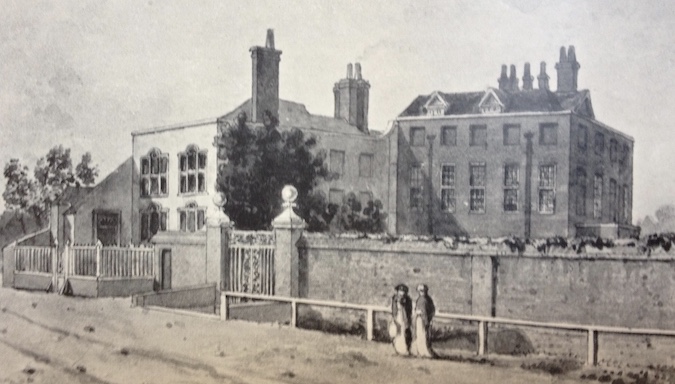 John Tradescant senior was head gardener to Robert Cecil – chief of staff to Elzabeth I and James I – at Hatfield House, who kindled his enthusiasm by sending him to the Low Countries in 1610 in search of fruit trees. In 1618 he was off to Arctic Russia then to the Levant, Algiers and Paris in search of plants, trees, seeds and also any rare or unusual objects. These “curiosities” were kept in the grounds of his house in what was called The Ark or Musaeum Tradescantianum, for which there was access for a small charge, making it the first public museum in the country and quite possibly the world.

John junior followed in his father’s footsteps by inheriting the job of head gardener to Charles I and made several trips to the new colony of Virginia, bringing back curiosities, trees and plants including magnolias and the tulip tree. He bequeathed the contents of the museum to his neighbour Elias Ashmole who, after a contretemps with John’s widow, donated them to the University of Oxford. They were the foundation of what became the Ashmolean – not the Tradescantian – Museum.

There is no plaque to mark where the Tradescant’s house house was, but the boundaries of the estate are circumscribed by South Lambeth Road, Tradescant Road and Walberswick Street. Both John Tradescants are buried and commemorated in the churchyard of St Mary’s Lambeth next door to Lambeth Palace. The deconsecrated church is now the Garden Museum – claimed to be the first of its kind in the world – which includes a small Ark containing some curiosities that have returned home from the Ashmolean. There could not be a more fitting resting place for the fathers of English gardening.
All previous instalments of Vic Keegan’s Lost London can be found here.