Skip to content
Though located at the heart of a major visitor site, this remarkable church goes largely unnoticed
Victor Keegan

St Margaret’s Church is lost in plain sight. It has a perfect position on Parliament Square but it is hardly noticed by the hundreds of thousands of visitors, almost entirely from abroad, who in normal times visit nearby Westminster Abbey each year. It is as if a changeling child has been abandoned outside the Abbey for protection. Yet were it not for the existence of the Abbey – literally a few yards away – it would be a major destination for visitors in its own right.

The church was founded in the 12th century by the Abbey’s Benedictine monks ostensibly to give local people a church of their own. A more cynical view was that it was to keep the lowlife, which included lots of criminals seeking legally protected sanctuary in the vicinity of the Abbey, from disturbing their activities (the image below includes the church in medieval times, surrounded by hovels).

Some famous people are buried there, such as Sir Walter Raleigh (who was executed around the corner in Old Palace Yard), the printer William Caxton, and Wenceslas Hollar, the great illustrator of London. So are over a dozen “regicides“ who signed Charles I’s death warrant. They were originally interred as heroes in the Abbey on Oliver Cromwell’s instructions, but disinterred on the orders of Charles II, Charles I’s son, and laid to a more permanent rest in the churchyard. 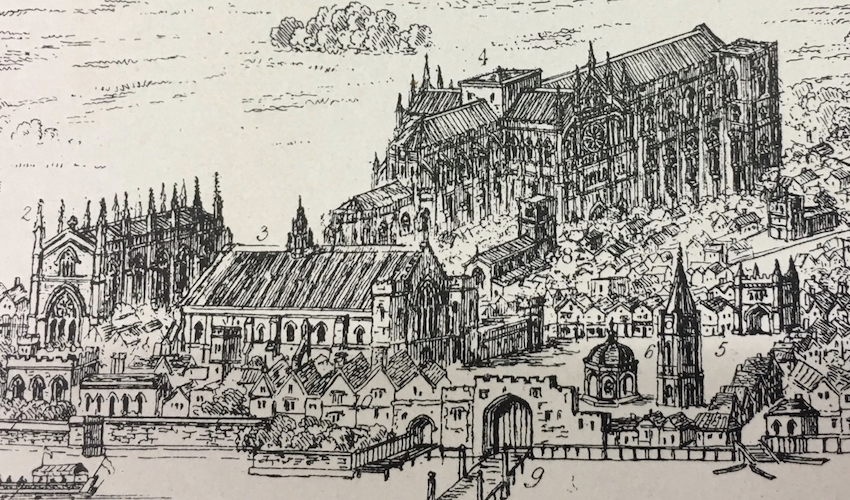 The only burial with a gravestone above ground is that of Alexander Davies, whose daughter Mary aged 12, married Sir Thomas Grosvenor, aged 21, a little-known baronet from the north of England in 1677. Mary brought with her a large acreage of land in London thought to be useless at the time but which later became Mayfair and Belgravia. It has been in the Grosvenor family ever since.

The church has had its fair share of fashionable marriages, from those of Samuel Pepys and John Milton in the 17th century to Winston Churchill’s and Harold Macmillan’s in the 20th. But the real interest of St Margaret’s is inside it. You won’t get a more dramatic contrast in stained-glass windows than that between John Piper’s deliberately soft toned modernist windows on the right as you go in and the amazing east window, which is a history lesson in itself.

It was constructed around 1526 at Gouda in Holland and intended as a gift to celebrate the marriage of Catherine of Aragon to Henry VIII, both of whom are featured in the stained glass. However, in the five years it took to make the window, circumstances changed. Henry ditched Catherine for Ann Boleyn, so the window embarked on a prolonged ecclesiastical version of pass the parcel. It was hidden in as many as ten churches and private homes in Essex. At one stage it was kept buried by George Monck, a Roundhead general, to conceal it from the destructive eyes of the Puritans. It was eventually re-purchased by the churchwardens of St Margaret’s in 1758, only to have its installation blocked for several years by the Dean and Chapter of the Abbey because it was too “popish” or high church.

In the 1540s, the church was nearly destroyed – not by the Reformation or riots but by the outrageous actions of one man, the rapacious Lord Protector of England, Edward Seymour, the first Duke of Somerset. In order to build a palace on the Strand to match his ego he set about destroying other buildings, such as the monastery of St John in Clerkenwell and the charnel house at St Paul’s in order to steal the stone. But when he tried to pull St Margaret’s down he met fierce resistance from armed parishioners and gave up. Justice took its own revenge – Seymour died before Somerset House was completed.

St Margaret’s is also linked with the extraordinary success of two black men who emerged from a background of slavery at a time of widespread illiteracy to become eminent men of letters in the latter part of the 18th century. Olaudah Equiano, who wrote a best seller about his experiences as a slave, is commemorated by a plaque inside the church where he was baptised. Ignatius Sancho, who was married in St Margaret’s, is buried in its burial ground in Christchurch Gardens, Victoria Street. His letters, published posthumously, were subscribed to by a dizzy list of aristocrats, led by the Prime Minister Lord North – a fascinating case of Black Lives mattering over 250 years ago.