If you could time travel back to medieval London you would be struck by three things then commonly seen in the centre of the city, but which have long since disappeared: monasteries, prisons and, especially, vineyards. London was awash with vineyards at that time. You could find them in Southwark, Westminster, Saint Giles, Bermondsey, East Smithfield, Holborn, Piccadilly (the Vine Street on Monopoly boards), St James’s Park, the Tower of London and almost anywhere with a road containing the word “vine”.

They were mainly owned by aristocrats, royalty and the church. The two most prominent were in Westminster and Holborn. Monasteries needed wine for communion and for the monks’ pleasure, so it is no surprise that Westminster Abbey had one south of Tothill Street, near where the almonry was located – commemorated in the Peabody building in Abbey Orchard Street, as the photo above shows – and another south of Great Peter Street between Horseferry Road and the Thames. There, eight acres of the Abbey vine garden were situated near another Vine Street, the old name of today’s Romney Street. The St James’s Park vineyard too was possibly owned by the Abbey.

How much wine was produced in those days and beyond? An awful lot if you believe the writer Thomas Pennant (1726-1798). He describes Lambeth as remarkable for the manufacture of English wines: “The genial banks of the Thames opposite to our capital yield almost every species of white wine; and by a wondrous magic, Messrs. Beaufoy here pour forth the materials for the rich Frontignac, destined to the more elegant tables, the Madeira, the Calcavella, and the Lisbon, into every part of the kingdom.” Pennant said that one of the “conservatories” contained 58,109 gallons of sweet wine, and added this astonishing claim: “It has been estimated that half of the port and five sixths of the white wines consumed in our capital, have been the produce of our home wine presses.” 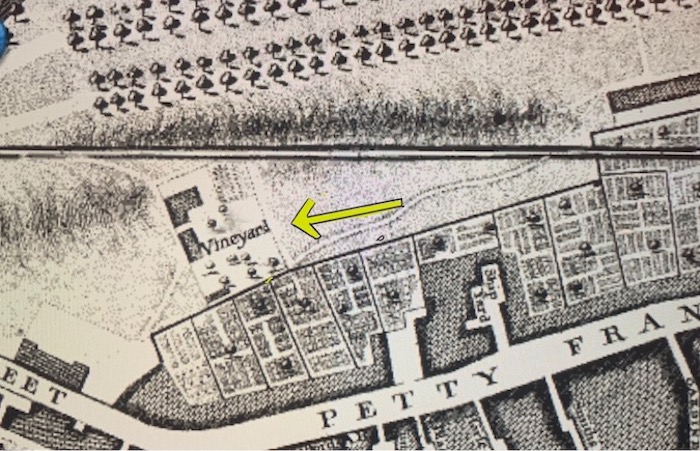 Holborn’s main vineyard (there were several) was on land taken over from the Bishop of Ely by Sir Christopher Hatton (of Hatton Garden), one of Elizabeth I’s  favourites. It was reported to extend to seven acres. The first Blackfriars monastery (close by today’s Holborn Viaduct) had a vineyard, as did St Mary’s nunnery further up Farringdon Road by today’s Vineyard Walk.

There was also a thriving bottling industry, which reached a high point in the 1660s when polymath Christopher Merrett, a member of the Royal Society – until he was kicked out for not paying his dues – recorded that London vintners were inducing a secondary fermentation in (French) white wine bottles, thereby inventing what today we call the méthode champenoise. Yes, Londoners invented what we today call champagne decades before the French because their bottles, made from wood-fired rather than coal-fired furnaces, were so fragile they would explode under secondary fermentation.

The current boom in English sparkling wine is thus merely reviving a lost industry. London no longer has plentiful vineyards and probably won’t ever again, despite the boost from global warming, if property prices remain high. However, there is one successful new vineyard in a London postal area. Forty Hall in Enfield has made the first sparkling wine from London grapes for centuries. The fruit has been turned into wine by a distinguished winery outside London (Davenports). But last year, Forty Hall sold some of its Bacchus grapes to Blackbook Winery in Battersea, one of four brand new London wineries, to produce the first totally London wine for a very long time. Few things in London are ever truly lost – they just return in different forms.