A rather plain reconstructed Roman Catholic church in Warwick Street, behind Golden Square, provides almost the only physical memory of an event that nearly became London’s equivalent of the French revolution.

The Gordon Riots of 1780 were by far the worst disturbances London had seen since at least since the Peasants’ Revolt of 1381. Their origins were a religious movement led by the eccentric Lord George Gordon against proposed, and quite minor, relaxations of the strict rules stopping Roman Catholics from taking part in public life. Gordon feared that if Catholics could join the army they would commit treason. In fact, Catholics had already been joining the army without problems and were much needed at a time when the British army was over-stretched fighting the American War of Independence against French and Spanish forces.

After a large gathering in St George’s Fields on 2 June, a crowd of up to 60,000, many with identifying blue cockades, marched to Parliament to present a petition. While Gordon entered the Commons the crowd outside  grew increasingly agitated, with the carriages of some peers being vandalised, a situation not helped by the government’s failure to mobilise local constables until a detachment of soldiers arrived.

The petition was overwhelmingly defeated, but hopes that the insurrection would fade were dashed that same night by the ransacking of what was then the (Catholic) Bavarian embassy chapel – now that reconstructed church (photo below) – and the Sardinian Embassy chapel in Lincoln’s Inn Fields, as well as the homes of rich Catholics. 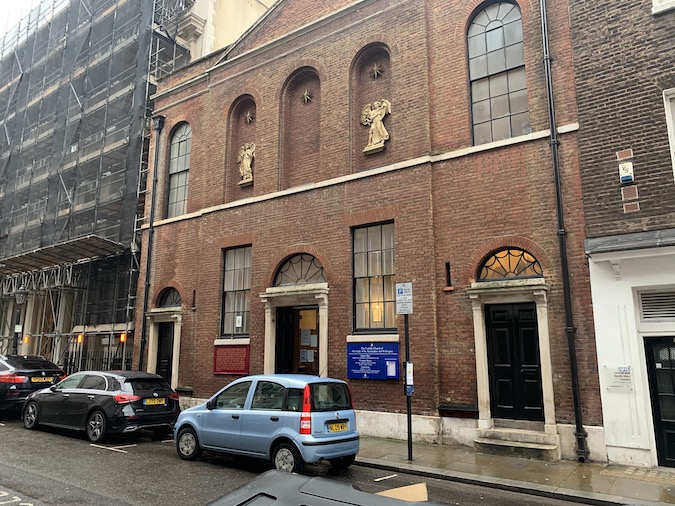 The riots remained anti-Catholic, but soon fanned out into widespread protests about economic and social ills. London had seen nothing like it. The near-revolutionary unrest lasted for seven days. Eight debtors’ prisons were attacked and the Bank of England was besieged, as was Lambeth Palace, the home of the Archbishop of Canterbury, amid cries of “No Popery”. It was only saved by the timely arrival of troops after the Archbishop and his family had escaped by river.

Ignatius Sancho, a black African who had escaped a background of slavery to become a distinguished man of letters, lived near Parliament in King Charles Street. He provided a blow-by-blow account of what happened, referring to the “maddest people that the maddest times were ever plagued with”. He added:

“Government is sunk in lethargic stupor—anarchy reigns . . . the Fleet prison, the Marshalsea, King’s-Bench, both Compeers [small debtors’ prisons], Clerkenwell and Tothill Fields, with Newgate are all flung open and 300 felons from thence only let loose upon the world. Lord Mansfield’s house [he was the Lord Chief Justice] in town suffered martyrdom; and his sweet box at Caen Wood [Kenwood, in Hampstead] escaped almost miraculously, for the mob had just arrived, and were beginning with it, when a strong detachment from the guards and light-horse came most critically to its rescue.

The library, and, what is of more consequence, papers and deeds of vast value, were all cruelly consumed in the flames. Lord North’s house was attacked; but they had previous notice, and were ready for them. The Bank, the Treasury, and thirty of the chief noblemen’s [houses], are doomed to suffer by the insurgent. There were six of the rioters killed at Lord Mansfield’s, and, what is remarkable, a daring chap, escaped from Newgate and condemned to die this day, was the most active in mischief at Lord Mansfield’s, and was the first person shot by the soldiers: so he found death a few hours sooner than if he had not been released.”

The upsurge moved to a conclusion when the army was at last called out on 7 June with orders to fire upon groups of more than four refusing to disperse. At least 285 people were shot dead and 200 more wounded. Around 450 rioters were arrested, of whom nearly 30 were tried and executed. Gordon was charged with high treason but found not guilty. The Lord Mayor was convicted of criminal negligence for not reading out the Riot Act and was fined £1,000. Thus ended riots that could easily have become England’s revolution.

IMPORTANT NEWS. Vic Keegan has gathered many of his Lost London piece into a very handsome hardback book called…Vic Keegan’s Lost London. You are urged to purchase it immediately.