The Supreme Court building in Parliament Square is on the exact spot where long stood Westminster’s medieval Bell Tower, whose bells rang for over 300 years until about 1750. The tower was the main building of the Abbey’s sanctuary, an area roughly where Parliament Square is today, where criminals and others could legally evade the authorities as long as they confessed to their wrongdoings. Not even the King or his retainers were allowed in under pain of excommunication.

If that sanctuary existed today, you could be sure that immigrants in fear of being deported would seek refuge there. Not even the Supreme Court could have done anything about it.

Most abbeys had sanctuaries. The one at Westminster was instituted by Edward the Confessor and lasted until James I abolished it. However, the local culture of criminality lasted for long after, which was why the nearby area behind today’s Victoria Street was so ridden with crime and prostitution that it became known as “The Devil’s Acre”, a phrase popularised by Charles Dickens.

The Bell Tower, or Clocktower as it was also called, naturally had bells – three of them to begin with. There was a belfry with bells in the cloisters of nearby St Stephen’s Chapel dating from even earlier times. There were also bells in the Abbey itself and presumably also in the adjacent St Margaret’s Church. Bells everywhere. When the three great bells of the clocktower were rung for special occasions, such as funerals and memorials, it was said that their ringing “soured all the drink in the town”.

The privilege of sanctuary did not offer exemption from market forces. This helps to explain why the houses in the sanctuary, which on old engravings look like shanty towns, commanded high rents – a straight case of demand exceeding supply.

The bell tower was about 75 feet square and about 60 feet high and would have been accessed through the High Gate into the Abbey precinct from King Street (today’s Whitehall), where the statue of Winston Churchill is today.

It had only one door and one window on the ground floor, but two chapels on different floors where refugees could hear mass and hopefully put themselves on the road to redemption. Its history is preserved in today’s street names such as The Sanctuary and Little Sanctuary, which meanders around the west side of the Supreme Court. An old picture of its remains is shown below. 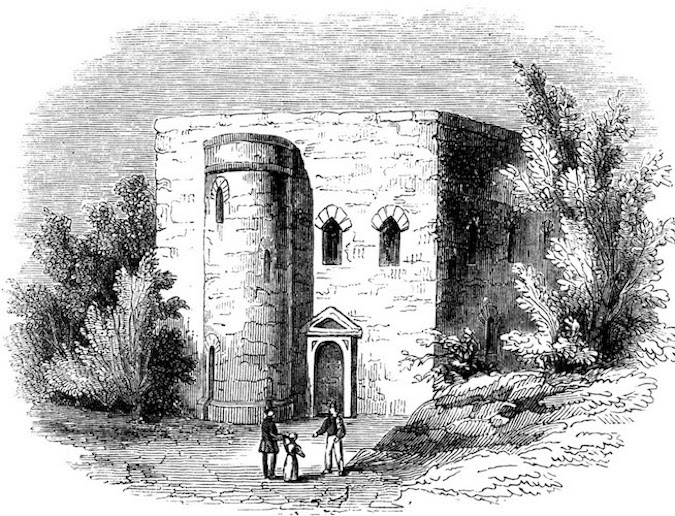 The most famous refugee was Elizabeth Woodville, wife of Edward IV, who twice fled to the sanctuary, though she was accommodated in the Abbot’s Cheynegates apartments rather than with “the common sort”.

During her second stay, she was conned by the Duke of Buckingham and the Archbishop of York into surrendering her younger son so he could “safely” join his brother in the Tower of London, where they were both almost certainly murdered at the behest of Richard III. The pair are now known as the Princes in the Tower.

It is interesting that not even the ruthless Richard, who didn’t flinch from murder, didn’t dare kidnap the prince from the sanctuary. He had to resort to false promises that his young namesake would be safe in the Tower and a claim that the sanctuary was for criminals, not children. The Bell Tower building was later converted into Three Tuns Tavern, not far from another tavern, curiously called The Quaker, in Great Sanctuary, where Samuel Pepys dined in 1660.

Today, the Supreme Court stands on the remains of two previous Guildhall buildings dating to the early and late 19th centuries. In 1912, foundations of the medieval structure and earlier Saxon remains were uncovered by archaeologists.

The Supreme Court building can almost be viewed as a work of conceptual art. As mentioned in the first of my Lost London dispatches, if you go to the back of the Supreme Court in Little Sanctuary you will see a stone-framed doorway which used to be the entrance to the medieval Tothill Fields prison. This was situated where today’s Greencoat pub is in Greencoat Place at the other end of Victoria Street. No-one seems to know how it got there.

Thus the pinnacle of English justice is built on the site of a sanctuary where you could have escaped justice with the entrance to a prison tacked on to it. You couldn’t make it up.