On 16 August, 1796, one of the most remarkable games of cricket ever played took place before “an immense concourse of people” in what was called Aram’s New Ground in Montpelier Gardens, off the Walworth Road near Elephant and Castle.

The famous match started at about 10.00 am. The Greenwich team was first to bat and scored an astonishing 93 runs. Play was interrupted in the afternoon, when the Chelsea team was batting, after the gates to the ground were forced open by the enormous number of people trying to gain admittance. Parts of the fencing broke and a shed collapsed under the weight of people sitting on top of it.

According to a report in the Hampshire Chronicle, the game was resumed at 6.00 pm and the Chelsea team completed its innings with a score of got 42. The Grrenwich team then “commenced their second innings, and six were bowled out after they got 60, so that left off 111 more than those with one arm”. The match was supposed to last for one day but, partly because of the disruptions, spilled into 17 August.

The event was a wonderful early example of people with disabilities engaging in sporting activities, though one report said that five wooden legs were broken during the game, which was apparently played for a purse of a thousand guineas – a lot of money in those days. 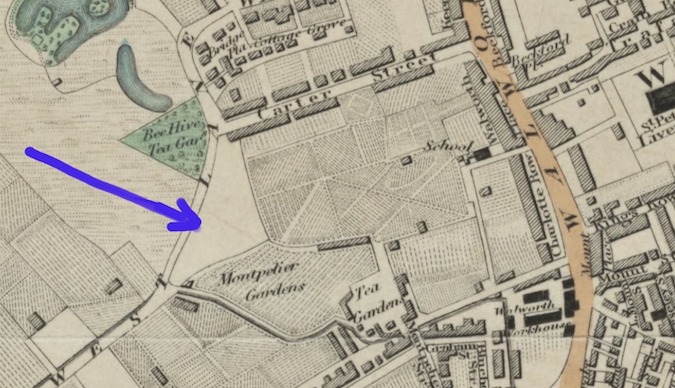 Aram’s New Ground (named after a George Aram) was created in the same year as the match took place and the Montpelier Cricket Club, which was based there, was founded at around the same time. The ground hosted major Monteplier matches for the next ten years, including one against the Marylebone Cricket Club – a rare example of the MCC playing the MCC.

The entance to Montpelier Gardens (arrowed in map above) and its cricket pitch would have been close to the junction of Walworth Road and today’s Fielding Street (then called Olney Street) after the railway bridge – roughly where the bend in Fielding Street meets Langdale Close and Olney Road today.

Cricket was also played in fields to the north of Montpelier Gardens, which were the grounds of the Bee Hive pub at the end of Carter Place (formerly Carter Street), also off the Walworth Road. To complicate matters further Montpelier was often known as the “Bee Hive Ground” because it was so near the actual one. The Bee Hive pub is still there, though closed at the time of writing.

The Montpelier club went on to make a big contribution to the future of cricket in England. The full story is a little misty, but it is clear that in around 1845 its members were prime movers in the formation of Surrey County Cricket Club.

William Houghton, one of Montpelier’s presidents, found a suitable venue for the proposed new club on a market garden in Vauxhall, which we know today as The Oval. Houghton negotiated a 31-year lease from the Duchy of Cornwall, and soon set about building a cricket ground on the land with the help of 10,000 turfs extracted from Tooting Common.

The Surrey County Cricket Club came into exisitence on 22 August, 1845, at the Horns Tavern in south London, when around 100 cricket clubs represented there agreed “that a Surrey club be now formed”. It has never looked back, even though some nostalgics might wish it was called the Montpelier Cricket Club so that the MCC could, at least in theory, still play the MCC.