Skip to content
The most outrageous of Charles II's mistresses, she acquired and obliterated some impressive London property
Victor Keegan

As mistresses go, Barbara Villiers, Duchess of Cleveland and Countess Castlemaine, was surely Queen Bee. Baptised in 1640 at St Margaret’s church, next to Westminster Abbey, she rose and rose to become the most notorious of Charles II’s numerous mistresses. Often known as the “Uncrowned Queen”, she exerted power out of all proportion to her position, not least over the actual Queen, Catherine of Braganza.

Nell Gwyn may have been the more vivacious of Charles’s mistresses but Barbara was the real deal, exerting influence long after having to move from the royal palace in Whitehall to her own palatial mansion, purchased by the King, on the edge of the Green Park. She even had a hold over the King when he moved on to other mistresses.

Samuel Pepys, the great diarist, was captivated by her beauty but worried about the increasing influence she had over the King, and at one stage confided: “I know well enough she is a whore”. And so she was, faithful neither to her husband nor to the King himself (not that he was one to set an example). She bore him six children, five of which he acknowledged, including their eldest son Charles Fitzroy who, can you believe it, was born at Hampton Court Palace while the King was actually on his honeymoon with Catherine. And the King’s reaction? He made Barbara Lady of the Bedchamber to his wife. You couldn’t make it up.

Charles gave Barbara Berkshire House adjoining the Green Park for services rendered. After being made Duchess of Cleveland in 1670, she renamed the dwelling Cleveland House (main image) and extended it by buying surrounding properties, enabling an eastern and western wing to be built and an ice house, which was excavated in 1956 (picture below). The site of the excavation was behind a recently constructed building also named after her – Castlemaine House – in Little St James’s Place. Cleveland House covered much of the footprint of today’s Bridgewater House, a beautiful building which backs on to Green Park. Its garden can be seen on the left as you  walk along the alleyway from the Park. 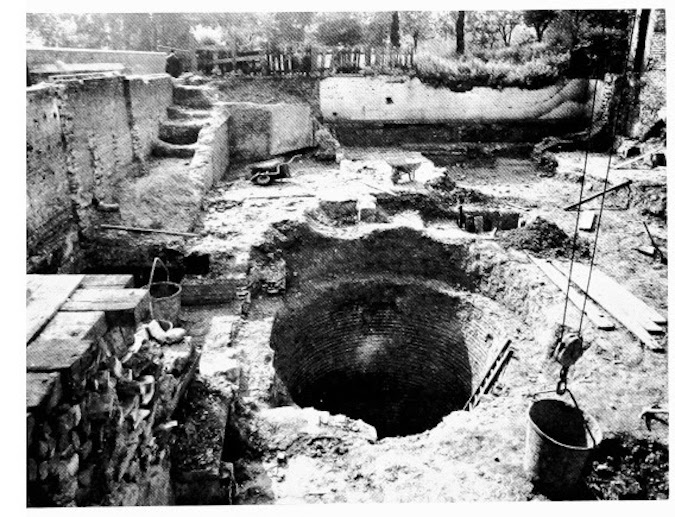 But the Duchess will long be remembered not for what she built but for what she destroyed. She was a serial gambler, who ran up enormous debts and had to be bailed out on several occasions by the King.

Also in 1670, she was given Nonsuch Palace near Cheam and created Baroness Nonsuch to go with it. This was no ordinary palace. It was called Nonsuch because Henry VIII, whose project it originally was, intended it to exceed every other European palace in magnificence, including the dozens of mansions and palaces he already owned. There was to be nothing like it.

It beggars belief that the Duchess had the palace demolished as it was a drain on her finances at a time when she was burdened with gambling debts. This removed what would have been an international tourist attraction today. The stones, bricks and other materials were sold off, with many of them incorporated into other great houses. Some ended up in the British Museum. 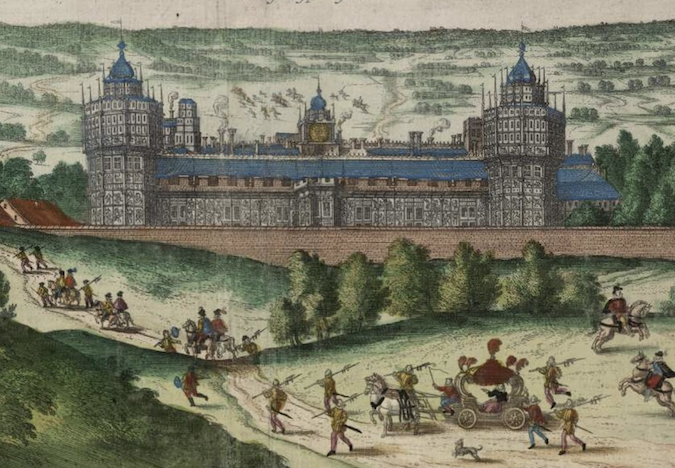 There is nothing left of Nonsuch Palace (pictured above) today. The only reminder of the incredible Barbara Villiers, apart from Cleveland Row which runs from Green Park to St James’s Palace, is the ghostly outline of part of the foundations of Cleveland House said to appear in the garden of Bridgewater House.