If you fancy a walk through one of London’s hidden time warps, start at an alley off Giltspur Street next to the lovely Viaduct Tavern – still looking like the gin palace it used to be – which has cells beneath it which, or so it’s claimed, were once linked to the long-demolished Newgate prison.

Walk to the other end of the alley and step back in time: you are now on land where the medieval Greyfriars Franciscan monastery once stood, established in 1225. Look through a window and get a glimpse of something much older – the remains of the old London Wall built by the Romans. It’s just a section of much more extensive wall remains that are preserved within a building occupied by Bank of America and can be seen for free if you book a visit.

From there, step forward in time again by walking through the vestibule of the bank, a citadel of modern capitalism, only to emerge in a garden and a Grade I listed bomb site.

The garden is where the nave of Christ Church Greyfriars used to be, part of the monastery complex. The church was destroyed by the Great Fire of 1666, but by 1704 it had been rebuilt on a smaller scale by Christopher Wren. Then, in 1940, the body of Wren’s church was destroyed by German bombs. Only its west tower still stands. The Christchurch Greyfriars Church Garden was established in 1989, reflecting the floor plan of the original medieval church (picture below). 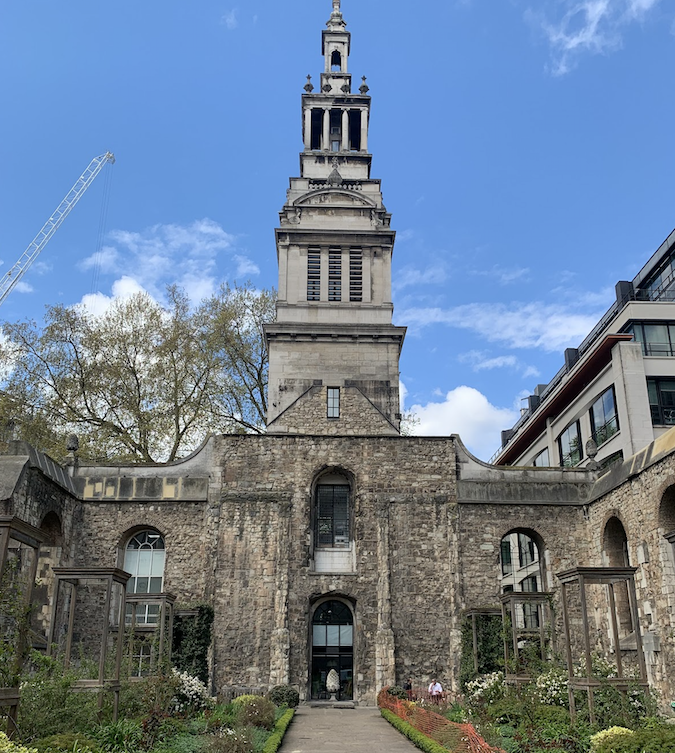 If you look at the base of the Wren church’s spire you will see some large stone pineapples. These were a personal motif the architect included in a number of his works, including nearby St Paul’s. They are a medieval symbol of hospitality. It is said that Wren even wanted to put one on top of the St Paul’s dome.

Christ Church Greyfriars was the largest church in London after St Paul’s and Westminster Abbey and one of an astonishing 126 churches within the boundaries of the City. In those days religion was literally all around you. Regular church attendance was compulsory and there were priests in every parish to say prayers for the dead.

It lasted as a place of worship until Henry VIII’s dissolution of the monasteries in 1538. After being moved by a sermon by Bishop Ridley urging him to do something about the poor, Henry bequeathed the monastery for that purpose. In the 1550s under Henry’s successor Edward VI it became a school, Christ’s Hospital (main picture), which sought to educate 400 poor youngsters out of poverty, though Edward provided nothing for its upkeep.

The school moved out to Horsham in 1902 because of bad sanitary conditions amid outbreaks of scarlet fever, but its memory is preserved in some delightful street sculptures of anonymous pupils at the side of the ruins of Wren’s church (pictured below). Parts of the entrance to the original school were moved to Horsham brick by numbered brick and are still there. 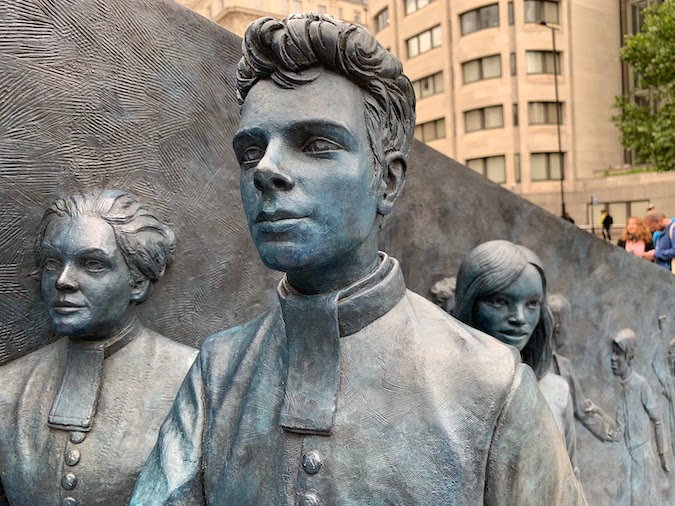 It was decided in 1949 not to rebuild Wren’s church but in 1950, instead of allowing the land to be redeveloped into yet more office blocks, its remains were designated Grade I listed. It is rather magical to look at the ruins within the present garden, its reconstructed steeple and, of course, those pineapples.