Caxton Hall wears its history lightly. Built on  the corner of Caxton Street and Palmer Street as parochial offices and a public hall for several local parishes, it opened in 1883 under the name of Westminster Town Hall. The style of the building has been described as “undernourished Renaissance” but to me it looks ever more attractive as the recently built skyscrapers try to eclipse it.

It has now, surprise, surprise, been converted into apartments, but for decades until its closure in 1977 it was famous because famous people got married there. The phrase “a Caxton Hall wedding” became a cliché in newspaper headlines. But it wasn’t only for celebrities, as it was the register office for all residents of Westminster. (Full disclosure: I too was married there).

There is more to Caxton Hall than meets the headlines. It is a history book in its own right, though nothing much to do with William Caxton, the pioneering printer whose works were located a few roads away in the precincts of Westminster Abbey and after whom the hall was named.

Caxton Hall was impressively liberal and non-denominational in terms of the meetings it hosted. They included the first Pan-African Congress (1900), the first meeting of the Suffragettes (1906: (there is a memorial in nearby Christchurch Gardens), the Russell-Einstein anti-nuclear manifesto (1955), the first public meeting of the Homosexual Law Reform  Society (1960), and also the formation of the National Front (1967). There is a plaque on the wall which says Winston Churchill “spoke here”, though with no further details.

The most dramatic event at the hall took place in 1940 after a speech by Michael O’Dwyer, a former Lieutenant Governor of the Punjab, who was assassinated there by an Indian nationalist, Sardar Udnam Singh, in revenge for an act that had taken place over 20 years previously – O’Dwyer had ordered his troops to fire on villagers peacefully gathered to celebrate the Sikh festival of Baisakhi. Sardar walked towards O’Dwyer and after calling out his name shot him dead. 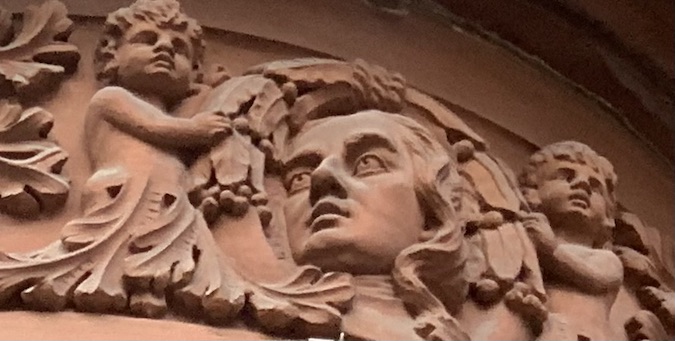 Caxton Hall’s celebrity wedding days are long gone, but the individuals whose likenesses are embedded in terracotta across the front of the building above the windows on the first floor may celebrated. Who are they? The website London Remembers is fairly sure John Milton, Caxton and William Shakespeare are there, and speculates that a fourth may be John Fisher, Bishop of Rochester. Have a go yourself when you are passing by.