Most of London’s railway termini are named after the London areas they were built in, such as Victoria, King’s Cross, Paddington, Liverpool Street, Marylebone and Waterloo. So is Euston, though unlike the others the origin of its name is not local. Where to begin?

In 1672 Charles II arranged a marriage between nine-year-old Henry FitzRoy – one of five illegitimate children he had with one of his favourite mistresses, Barbara Villiers – and Isabella Bennet, the five-year-old heiress of Henry Bennet, 1st Earl of Arlington.

Fitzroy is an Anglo-Norman word meaning son of a king – usually one born out of wedlock. The name was often maintained because the prestige of royalty outweighed the stigma of illegitimacy.

In 1675, when he was 12, Henry FitzRoy was created the first Duke of Grafton and – wait for it – in 1685, he and his even younger duchess wife inherited a country estate in a Suffolk village. The name of the village was Euston and at the heart of the estate stood Euston Hall, which the Grafton family still owns. Sadly, the village doesn’t have a railway station but it has given its name to one.

That is because the family owned a lot of land in the area now called Euston and developed it during the late 18th and early 19th centuries. The names Grafton and Fitzroy also bear witness to this. Stroll around Fitzroy Square and its garden, built in the 1790s, and out into a maze of connections – Grafton Way, Grafton Mews, Grafton Place, Euston Grove, Fitzroy Street, Cleveland Street – Barbara Villiers was Duchess of Cleveland – Euston Street, Cleveland Mews and, of course, Euston Road, sanctioned by Parliament in 1756 and running from Regents Park past the station and Euston Square. There was even a Duke Of Grafton pub at 278 Euston Road until it was demolished. Euston station, built by the London and Birmingham Railway company, opened in 1837.

Maybe Duke’s Road is also named after Henry FitzRoy, as his family owned so much land in the area. This was augmented when the lease of the Manor of Tottenham Court “descended” to Isabella. The manor stood on, as you might expect, the very early Tottenham Court Road, at its northern end. It had previously been called King John’s Palace and had multiple owners, including, in 1086, the Canons of St Paul’s Cathedral. In the Domesday Book it was known as Tottenhale. 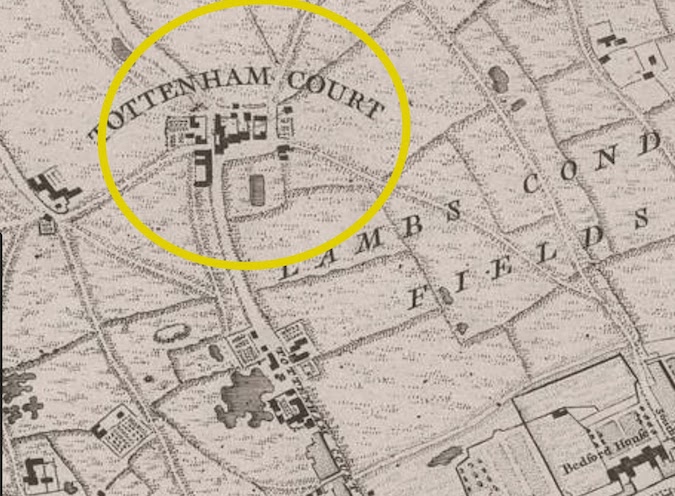 Before its demolition in 1808 the court was for a long time the first countryside settlement reached by people leaving London from Oxford Street, as shown on the larger version of John Rocque’s 1746 map of London above. 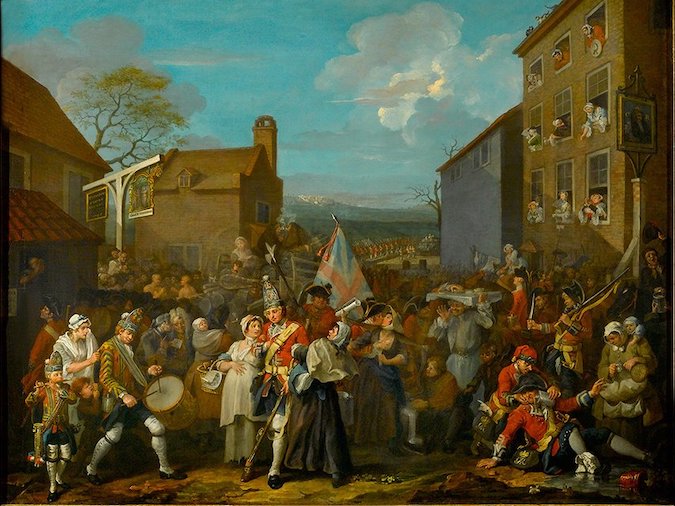 On the left is the Adam and Eve pub and on the right, the King’s Head, a hostelrie brimming with prostitutes whose sign depicts the head of Charles II, the king in question. Extraordinarily, Hogarth had the nerve to offer the painting to one of Charles’s successors, George II, who was king at the time of both the Jacobite threat and the creation of the painting, thinking he would be amused.

But George was not happy seeing his glorious army depicted as ill-disciplined layabouts, and sent the painting back. It can now be seen in the Foundling Museum near Brunswick Square, which had strong associations with Hogarth, as he was involved in the creation of the Foundling Hospital.

If you look across the road from Warren Street station today you might be able to imagine the scene Hogarth captured. The Charles II pub was roughly where Euston Tower (main picture) now stands. Goodness knows how Hogarth would have painted how the area looks now.

On London strives to provide more of the kind of  journalism the capital city needs. Become a supporter for just £5 a month. You will even get things for your money. Details here.