The sixteenth century Royal Exchange building is situated in the City of London between the Bank of England and the Mansion House. If you wonder why this historic building has been turned into a succession of posh shops the answer is that that is how it started.

When the formidable merchant Sir Thomas Gresham built the nation’s first stock exchange or Bourse there in 1567 so that traders could meet in one central place instead of in the surrounding streets, he also turned the first floor into an array of 150 shops or stalls, mainly catering to well-to-do women. It thus has a strong claim to be Britain’s first shopping mall. It was said you could find more coaches parked there than outside church doors. The building was officially opened in January 1571 by Queen Elizabeth I who gave the permission for use of the title Royal and a license to sell alcohol.

If can be argued that Sir Thomas’s vision laid the foundations for Britain’s financial supremacy. But the interesting thing is the extent to which then – as now – that success depended on foreigners. Sir Thomas saw the commercial opportunity provided by the arrival of immigrants piling into London to escape the clutches of the Inquisition. He got permission from the City’s ruling aldermen to “employ such strangers about the making of the said Burse, as he might think proper.” 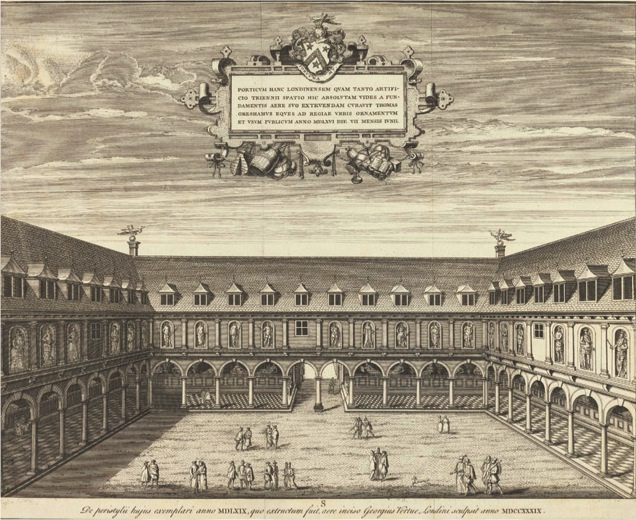 The works were “under the guidance of a Flemish architect, and conducted by a Flemish carpenter”, according to John William Burgon, biographer of Sir Thomas, who also claimed that, apart from wood from Suffolk “nearly all of the materials of which the edifice was composed were brought from Flanders.”

Labourers protested at the immigrant influx and, according to Burgon, the bricklayers of the city had been guilty of “many misdemeanours, both in words and deeds” towards Sir Thomas – jealous, probably, of the foreigners he had begun to employ. Not only that but half of the merchants trading in the Exchange were foreign too, including from Holland France and Germany, as Sir Thomas sought to wrest financial and trading success away from Antwerp and Venice.

Burgon concluded: “His (Gresham’s) wish to see the arts and artisans of the Low Countries transported into England was actually fulfilled and so completely that our commercial greatness may be said to have arisen on the ruins of that of Antwerp. The Flemings came over in immense numbers, established their manufactures, and enriched the country to a prodigious extent.A census taken in 1567 found that of 4,851 strangers in the city no less than 3,838 were Dutch at a time when London’s population was around 255,000.”

BREXIT WILL BE GOOD FOR LONDON. Really? That is the bracing motion to be debated on 13 September in the heart of our 60% Remain city. Speaking in favour of the motion will be former Boris Johnson adviser Daniel Moylan and Victoria Hewson from the Institute of Economic Affairs. Opposing it will be dedicated anti-Brexit campaigner Andrew Adonis and distinguished Liberal Democrat London Assembly Member Caroline Pidgeon. The event has been co-organised by On London and the London Society. On London founder Dave Hill will be chairing. How can you afford to miss it? Buy your tickets here.