On 17 August 1554 two people met for the first time and stayed in a mansion where 180 Borough High Street, marked above in yellow, is today. Two days later they were married in Winchester Cathedral. The ceremony was a bit awkward as the groom could not speak English. The couple got by with a mixture of French and Spanish.

This was no ordinary blind date. The groom was Phillip II, King of Spain, and his bride was Mary Tudor, eldest daughter of Henry VIII and best known as Queen Mary I or Bloody Mary because of all the Protestants that were executed during her short reign from 1553 until her death in 1558. The house had been there since the previous century and rebuilt in palatial style in 1522 by its then owner Charles Brandon, 1st Duke of Suffolk. Its name was Suffolk Place.

Mary was attracted to Philip, partly because he was a Catholic and might therefore help her with her plans to reverse the Reformation and reconvert England to the Roman faith. But her love was not reciprocated. Philip found Mary unattractive and after 14 months of marriage left for Spain never to return, though he remained King of England jure uxoris meaning “by right of (his) wife”. Games of Thrones don’t always have happy endings.

This wasn’t the first time a Mary Tudor had had a marital link with the future 180 Borough High Street. It had previously been one of the homes of the sister of Henry VIII of that name and resulted from another example of royal intrigue and romance.

In 1514, this Mary Tudor was married by proxy to King Louis XII of France, who was more than 30 years her senior. The union made Mary Queen of France. Louis was nuts about Mary and spoiled her with lavish gifts, but Mary did not return his affection because she was in love with someone else – wait for it – Charles Brandon.

Her marriage to Louis had, of course, been a political one to bind the two often warring nations in peaceful coalescence, but the arrangement didn’t last as Louis died barely three months later. This left Mary free to marry Brandon, at least in theory. Mary believed she had extracted from Henry permission to to do so in the event of Louis’s death. But although Brandon was a courtier of Henry and had been his buddy for years, the king was opposed to the match.

The couple went ahead regardless and married secretly in Paris in 1515. To marry a royal princess without royal consent was potentially a head-losing offence, and Henry was furious when he found out. But he became reconciled to the union after Mary not only handed over all the lavish presents she had received from Louis but also pledged to give him £4,000 a year for the foreseeable future – a huge sum in those days.

Whether all this brought happiness to Mary is a moot point. Brandon still spent most of his time at court. Mary died in 1533 and, by all accounts, Brandon wasn’t present during her last days as he was too wrapped up in preparations for the wedding of Henry and Anne Boleyn. He didn’t attend her funeral either. Some husband.

Six weeks after Mary’s death, would you believe it, the good Duke of Suffolk, by then aged 49, married Katherine Willoughby, a 14-year old heiress who had been his ward and betrothed to his and Mary’s son Henry Brandon, whom, in 1525, King Henry had made 1st Earl of Lincoln at the age of two. Henry Brandon was still too young to marry, so his father, worried about losing Katherine’s extensive lands, decided to marry her himself. 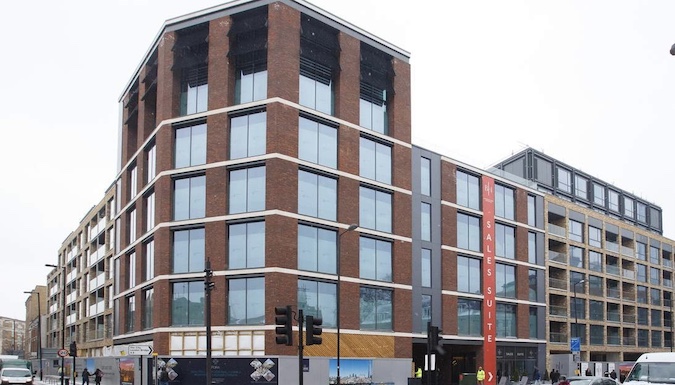 What Katherine thought about this in personal terms can only be guessed at, but she did go on to bear Charles Brandon two sons and the marriage was a triumph for her socially, as becoming the Duchess of Suffolk made her one of the highest ranking women in the country.

Suffolk Place – sometimes known as Suffolk House – might appear to be the one stable factor in this curious story, but even that didn’t last for very long. In 1536 Brandon, needing money to fund his lifestyle at court,  gave it to King Henry along with his numerous manor houses in exchange for some cash and the Bishop of Norwich’s equally palatial house at Charing Cross, known later as York House. When “Bloody Mary” met Philip II there in 1554, Suffolk House was owned by her dad.

Bizarrely, three years later the mansion was pulled down and tenements built on the site instead, which became a notorious rookery called The Mint. Today, a new office block stands at 180 Borough High Street. See photo above. Its name is Brandon House.