Today, 4,000 Londoners will go to Wembley Stadium to watch an FA Cup semi final between Leicester City and Southampton. All will be either “key workers” or residents of Brent and they will fill just a small fraction of the huge venue’s 90,000 seats. But their attendance will be historic – and for more than one reason.

It’s headline significance is its part in a government trial for taking England further out of lockdown. But along with being the first to attend a Wembley event for more than a year, those 4,000 people will also be the first to enter the ground by way of the Olympic Steps, a brand new addition to the stadium’s surrounding architecture and public realm.

I went on a site visit to the steps on Thursday. They form the last part of a large and long overhaul of the pedestrian avenue called Olympic Way – though widely known, especially among football fans, as “Wembley Way”.

The new steps replace the “pedway” bridge over coach and car parking space that had formed the final part of the route between Wembley Park station and Wembley Stadium since the 1970s. Olympic Way as a whole had carried millions of spectators to thousands of Wembley events following its construction in 1948 – mostly to the old “Twin Towers” Wembley prior to its demolition from 2002.

Why was “Wembley Way” officially Olympic Way? Because it was constructed for the 1948 London Olympics. The stadium at Wembley – known in those days as the Empire Stadium – hosted many of the Games events. They were the first Games to be held after after World War II, and the lesser known story of Olympic Way has strong and revealing connections with that conflict’s immediate aftermath in London.

Although the war was over, there were still German prisoners of war (PoWs) held in Britain. Wartime fatalities and the continuing call of the armed forces meant there was a labour shortage too. It was decided that Britain’s German captives would be used to clear up the rubbish of the Games, but the plan triggered opposition. One newspaper said the use of a “slave squad” before the eyes of foreign visitors would make the country look bad.

So instead PoWs swelled the workforce building the infrastructure that served the stadium, Olympic Way included – a more dignified and constructive form of work in advance of the event. The BBC told that story in more detail back in 2010.

The new Olympic Steps, built by developer Quintain in a joint project with Brent Council, come at the end of the new Olympic Way, which is itself part of the much larger redevelopment of the land around Wembley with housing, shops and more. It’s a continuation of a process with the new stadium, opened in 2007, at its heart. 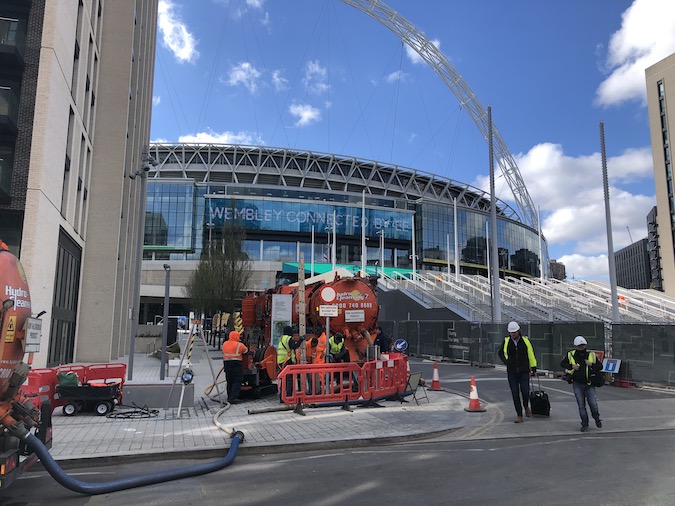 I enjoyed my trip to Wembley. It was great to be out and about in the city and to visit a scene of renewal at one of London’s great locations. And it was pleasurable to listen to Julian Tollast, Quintain’s head of masterplanning and design, talking about his contribution. He described it as, for him, “the culmination of 16 years’ work”.

Tollast said that when he joined Quintain in 2005, there were three big Wembley tasks before him: sorting out the parking, sorting out the retail and sorting out the pedway. Having replaced the latter, Tollast feels “we have liberated a new piece of public realm which is bigger than the football pitch inside the stadium. I think it will become the new gathering point outside Wembley”.

To my inexpert eye, the steps – there are 48 of them – neatly combine the virtues of functionality and simple elegance. Lifts have been installed for visitors who will need them – the ramps were on the steep side for wheelchairs – and a public open space has been created at the foot of them. Tollast said the steps are also not bad for sitting on. They will be a good place from which to watch events held in the new Olympic Way public space.

The 1948 Olympics were part of London’s post-war recovery. Now, as the city strives to recover from the pandemic, perhaps its biggest trauma since the war, the Olympic Steps say London is regenerating once more.