For whole decades there has been talk of so-called “driverless” trains coming to the London Underground, and yet there are none on the network to this day. That hasn’t lessened the fuss and furore any mention of them creates.

In July, Boris Johnson said that getting “driverless” trains on the Tube should be a condition of further funding support for Transport for London from his government. The Prime Minister proclaimed – and not for the first time – that adopting such rolling stock would be not a only a giant technological and business efficiency leap forward but also the solution to an industrial relations problem that dogged him throughout his eight years as London Mayor.

His implied message was that because “driverless” trains wouldn’t have drivers there would be no drivers to go on strike. His comments were made during a visit to the site of a factory being constructed in Yorkshire, where new trains for the Piccadilly Line to replace the current 1970s ones will be built. “You can run these trains without the need for somebody to be sitting in the driver’s cab the whole time,” he told reporters. “Let’s not be the prisoners of the unions any more.”

But on Monday, as negotiations about money continued between TfL and various parts of Johnson’s national government, a TfL report about “driverless” trains emerged. It was compiled in August and provided to financial analysts KPMG, who have been reviewing TfL’s finances on the government’s behalf. First brought to our attention by BBC London’s Tom Edwards, the report concludes that introducing “driverless” trains across the London Underground system would cost £7 billion and represent “poor value for money”. It also provides 26 pages of reasons why.

So what are we to believe about “driverless” trains? And what exactly are they anyway?

The word “driverless” merits being placed in quotation marks – even TfL does it in its report – because the meaning and significance of the term “driverless trains” varies depending on who is using the term and the public’s understand of its significance.

For Johnson and other Conservative politicians, the trains serve, quite literally, as a propaganda vehicle, loaded with bedrock Tory messages about a proud nation’s potential for dynamic innovation and the abuse of power by union “barons” at the traveling public’s expense. And although there was some truth in what Johnson said in Yorkshire, it was very far from the whole of it.

It is correct that the new Piccadilly line trains could theoretically function without someone sitting in the cab at the front. But in reality it would be many years before that could happen and might never happen at all. The suggestion that “driverless” trains would mean the end of Tube strikes is misleading. And for people who actually run railways – TfL, for example – the “driverless” issue is far less straightforward.

A basic grasp of the terminology is useful. The leaked TfL report for KPMG contains a helpful table about that (see below). It shows us, for example, that “driverless” is not another word for automatic, as Londoners could be forgiven for believing. Some Underground lines – the Northern, Central, Jubilee and Victoria, the latter since 1968 – are already largely automatic. Yet they also have a “driver” at the front who manually opens and closes the doors and performs some other functions.

The table is also a reminder that “driverless” is not the same thing as unstaffed. A different part of the capital’s rail network, the Docklands Light Railway, is classified as automatic and as “driverless” in the sense that there is no cab at the front that someone sits in. However, DLR trains still have somebody on board – a train attendant – who can operate the doors and drive the train if necessary. And those attendants, while not “drivers”, are nonetheless trade union members and who have gone on strike in the past. 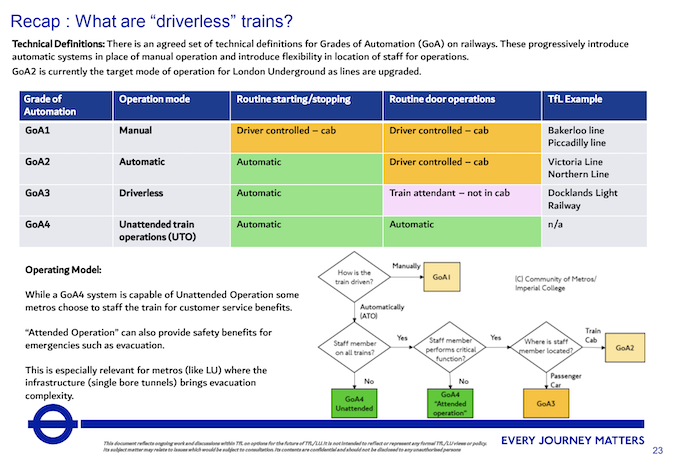 Four different grades of train automation are set out in the table, with the highest of them a state of complete automation with no staff at all – neither a “driver” nor an attendant – on board the trains. Such operating systems are described as unattended train operation (UTO), and there are many examples of them round the world. UTO is, perhaps, the ideal towards which the London Underground should aspire in the mind of the Prime Minister and others.

What is stopping “driverless” trains or even full UTO operation coming to the Underground? There’s quite a list of reasons.

The Prime Minister was factually correct when he said in Yorkshire that the new Piccadilly line trains have the potential to be operated without a person “sitting in the driver’s cab all the time”. But the “driverless” future he described looks a very long way from arriving.