Big hopes have been expressed that the impact of the pandemic and street redesign measures introduced in emergency response to it – segregated lanes, low traffic neighbourhoods and so on – will have the effect of substantially boosting the amount of cycling done in London and the numbers who get around using that form of transport.

It is highly desirable for more people to choose to travel by bicycle rather than by car in London, for obvious air quality, physical fitness and road congestion reasons. Some claim that this is already happening on a large scale. But what have Transport for London’s cycling data been indicating about progress so far and possible longer-term changes post-Covid?

A recent TfL presentation for the Mayor’s cycling and walking commissioner Will Norman, obtained by means of a Freedom of Information request, showed a couple of interesting patterns over the period from March 2020 to March 2021.

The figures, compiled from 27 TfL automatic traffic counters, most of them in Central London, confirmed the now-familiar overall substantial rise in weekend cycling: the changes with the equivalent weekends of the previous year were, in the presentation’s words, “centred around twice normal levels” albeit also “very variable”. It seems fair to suspect that weather conditions help account for those variations.

The weekday story was different. The TfL presentation said that during the first lockdown, weekday cycling recorded by the 27 monitors fell by around 60 per cent compared with the previous year, before it “mostly recovered for the rest of 2020” then fell again to around 50 per cent during the heavy lockdown period that came in with the New Year. 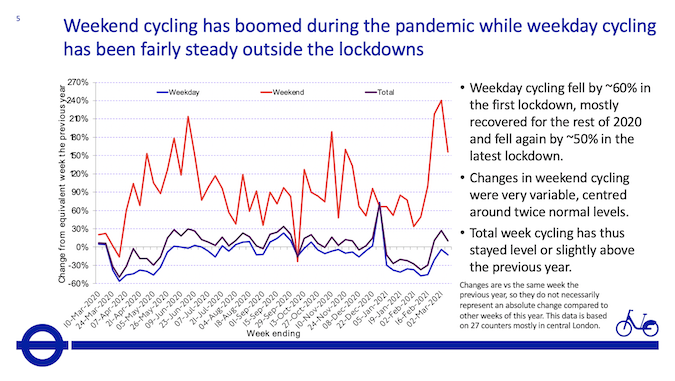 What might those numbers signify? Plainly, lockdown advice to stay at home and work from home if possible along with non-essential shops being closed will have made a huge contribution to the initial and post-Christmas falls. It could be pointed out that the collapses in cycling levels compare favourably with the huge ones for public transport (though those for buses and the Underground have lately been inching up to 60-odd per cent and 40-odd percent of “normal levels” on weekdays and much more at weekends).

Another interesting feature of the data highlighted in the TfL presentation was that “weekday cycling has moved away from Central London”, as one of the presentation slides headlined it. Figures showed that “weekday cycle flows in autumn 2020 increased by 7% in inner London and 22% in outer London compared to [pre-pandemic] spring 2019”, but it was stressed that this did “not necessarily represent an increase in the number of people cycling.”

That was because “changes in the individual cycle frequency and the redistribution of existing flows also come into play, both of which have been seen strongly during the pandemic”. The presentation went on to record that “weekday cycling flows from summer 2020 showed a 24% reduction in central London (Congestion Charge zone) compared to the previous year”.

To TfL, this suggested that “part of the increase in weekday cycle flows in inner and outer London could be displacement from cycling to or within Central London”. In other words, rises in cycling in some parts of London could in part be because during the pandemic the same people that rode bicycles before have been doing so in and to different parts of the city.

Large conclusions cannot really be drawn from any of these figures, though they offer a few straws in the wind. After the summer is over and, we hope, the pandemic is becoming a thing of the past it might become easier to make comparisons with the days before the virus came into our lives.