The story of change in Wandsworth over London’s recent growth decades has been different from that of other Inner London boroughs, be they its south London neighbours or others to the north of the Thames. Like those contemporaries, Wandsworth has become progressively more middle-class, yet, unlike them, its character has not really become associated with “trendy” liberal values or the voting habits that to go with them. Though Labour has made political inroads, the local council has long been a beacon of Conservatism. Though known for genteel residential “villages”, Wandsworth, with its long stretch of prime riverfront, has also attracted notice for rapid property development. 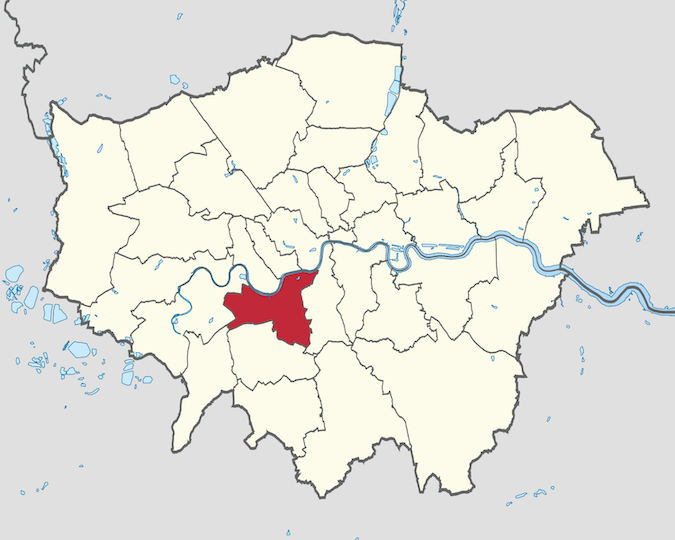 The present day Wandsworth was formed from a big part of its predecessor of the same name and the old Battersea metropolitan borough. Battersea itself is a good example of an area that has undergone enormous transformations. It was once best known for the long-gone funfair at Battersea Park and, in particular, for that legendary London landmark Battersea Power Station, the subject of a fine book by Peter Watts. It was also the setting for Nell Dunn’s celebrated 1963 short story collection Up The Junction, with its pen portraits of hard-up working-class life: “The garden was full of sunflowers six feet high with faces as wide as dinner plates. At the end of our street were four tall chimneys.” The power station chimneys are still there, but now as ornaments within one of the expensive high-rise housing schemes of the massive Nine Elms development, which is helping to pay for a new Underground station. Battersea in general is now thought of as a bit posh.

Wandsworth also contains Clapham Junction – the railway interchange referenced in the title of Dunn’s book – and half of Clapham Common, though Clapham itself is mostly across the border in Lambeth. The proverbial “man on the Clapham omnibus”, long standing shorthand for the everyday Briton, seems more likely to live on the Wandsworth side. The tongue of territory that forms the south east of the borough contains Earlsfield, where future London Mayor Sadiq Khan was born, and Tooting, which gives its name to the parliamentary constituency he represented from 2005 until 2016, standing down after he moved up to City Hall. Khan also served as a Wandsworth councillor. The Thames riverside at Putney is the starting point for the Oxford- Cambridge boat race championship course. Part of Wimbledon Common falls into Wandsworth too. 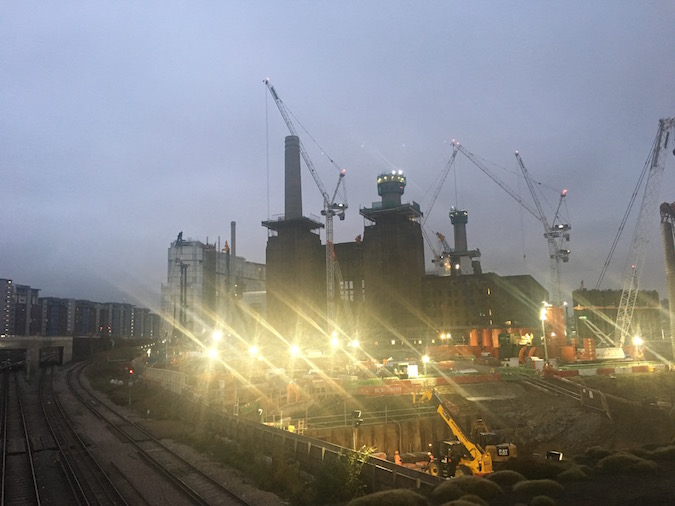 The recent history of London local government has been strongly marked by the approach of Wandsworth’s long string of Tory administrations, especially since the 1980s, when the council pioneered the contracting out of council services under the leadership of Paul Beresford who, in 1990, was knighted for his efforts. These days, he is an MP in Surrey. Wandsworth was also famous for setting the lowest level of council tax in the country when it was introduced in 1993. By then, the council was led by Edward Lister, also now a knight, who held the post until 2011 when he moved to City Hall to become Boris Johnson’s chief of staff and deputy mayor for planning.

In his book London’s Boroughs At 50, the LSE’s Professor Tony Travers has described three key strategies that were adopted during the borough’s white heat Thatcherite heyday: “The efficient management of services; a policy of selling assets; and capital investment using the receipts from assets sold.” Figures showed that Wandsworth functioned with half as many staff as “loony Left” Labour Lambeth next door. As Travers recalls, senior national Tories found streets on the Wandsworth-Lambeth border ideal settings for political broadcasts contrasting thrift and efficiency with chaotic extravagance. But critics said the borough had sold off one fifth of its social housing, compared with Lambeth’s less than three per cent. Wandsworth’s local politics have had a big role in the borough’s social evolution.

Wandsworth has a population of approximately 324,400 people. The average annual salary is £41,100 and the poverty rate is 22 per cent. 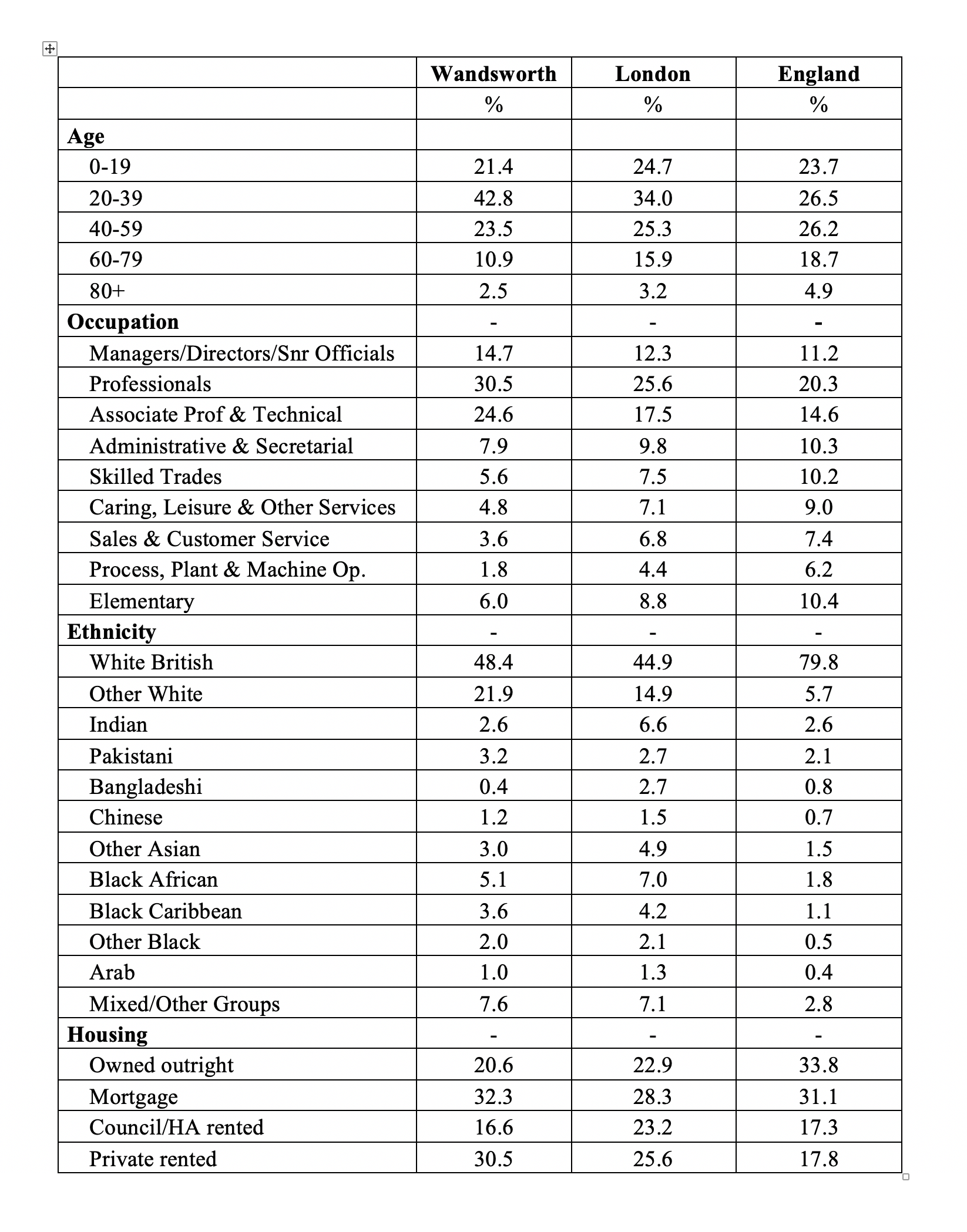 All figures drawn from London Datastore area profiles and/or Office for National Statistics.

The Conservatives have controlled Wandsworth Council since 1978. Eddie Lister’s successor as leader, Ravi Govindia, has run a less radical, more managerial administration in recent years. During that period, a combination of concerns about the effects of austerity, resistance to high-rise development and Brexit – Wandsworth voted by a huge 75 per cent to remain in the EU – have helped erode Conservative strength. Just as the old, industrial Wandsworth gave way to what the council now terms “the Brighter Borough”, a mix of demographic, built environment and national and London political trends is seeing it metamorphose again.

The Tories held on in 2018 despite Labour making seven seat gains at their expense and even winning the popular vote. Perhaps the most impressive result, though, was the victory of Independent Malcolm Grimston in West Hill ward. Previously a Tory councillor, he had left the party in September 2014, primarily over the closure of his local library, and topped the poll with thumping 4,002 votes. The Tory majority at present is just six.

Labour has also advanced in recent parliamentary elections in the borough. Rosena Allin-Khan easily succeeded Sadiq Khan (no relation) in Tooting at the 2016 by-election caused by his mayoral triumph has held the seat with ease in both general elections since. Marsha De Cordova’s capture of Battersea from Tory Jane Ellison was one of the shocks of 2017 and she remains the MP. The Tories went into the 2019 general election with only one Wandsworth seat – Putney. The incumbent Justine Greening had decided to stand down and Putney became the sole Labour gain in the capital on 12 December 2019, with Fleur Anderson getting home by 4,774 votes.

Wandsworth falls into the Merton & Wandsworth London Assembly constituency, which is held by Labour’s Leonie Cooper. 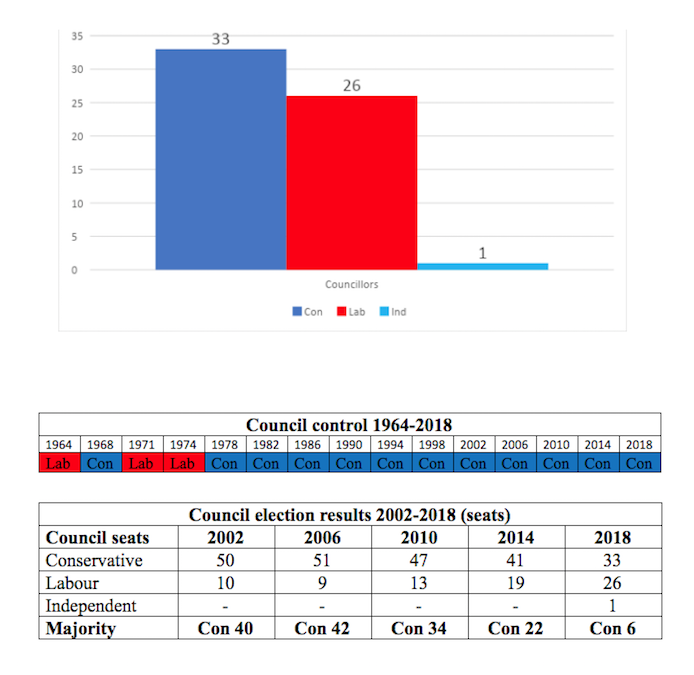 It occupies the north eastern section of the borough, stretching away from the southern waterfront. St Mary’s church, from which one local electoral ward takes its name, is noted as the place where William Blake got married and a vantage point from which M W Turner painted the Thames. The massive Nine Elms development, straddling the Wandsworth-Lambeth border and containing the refurbished body of the famous power station, looms large. Moving south, a cluster of council-built housing estates stands to the north of Clapham Junction station. The high rise Doddington is perhaps the most famous. The Battersea parliamentary constituency takes in Balham, which has a long-standing Polish community. Northcote ward is Wandsworth’s original gentrification ground zero.

Taking up the much of the western section of Wandsworth and that part of its riverfront, Putney is considered a highly desirable suburb, served by a Cornish granite bridge designed by Sir Joseph Bazalgette, which connects it with Fulham across the water. Putney has its own St Mary’s Church, where the Putney Debates were held during the English Civil War. Sadly, Putney High Street has become known for retail uniformity and high levels of air pollution. There is lovely Italian cafe right opposite a Putney Bridge station (or there was last time we looked) The Thamesfield and East Putney wards had the highest numbers of Australian and New Zealander residents in London at the time of the 2011 census.

These areas lie mostly to the south of Putney, though they fall into the Putney parliamentary constituency and include Putney Heath. Roehampton is a large suburban area which includes, close to its border with Richmond Park, the large, modernist Alton estate, whose future is the object of 20th Century Society concern. The streets on and around West Hill – which is a road, part of the A3 – and near Southfields station on the District Line contain some large, expensive houses. Up the hill from the station are a number of council-built estates mixed in with private mansion blocks to the form the Parkside area. The Southfields electoral ward contains a wedge of geometrically rigid terraced streets known as the The Grid between the Underground tracks and the A218. Southfields station is the most convenient for spectators of tennis at Wimbledon, whose legendary courts lie on the other side of Wimbledon Park in the borough of Merton. 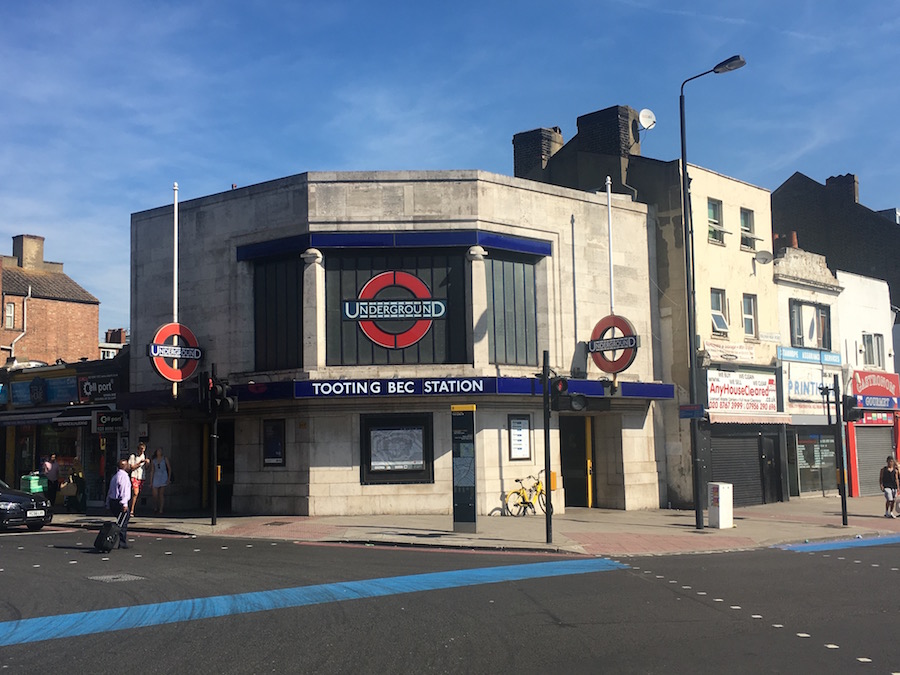 The east of Wandsworth borough is its safest for Labour, containing the adjoining areas of Furzedown, Tooting Graveney and Tooting itself, part of which is in Merton. The Tooting Bec and Tooting Broadway Northern Line stations are classic Charles Holden designs, the latter Grade II listed. The name of Tooting will always have comedy connotations thanks to being the setting for the late 1970s sitcom Citizen Smith, which starred Robert Lindsay as Wolfie Smith, leader of the Tooting Popular Front (presumably an advocate of communism in one suburb). More recently, it has been named by Lonely Planet one of the coolest places in the world. Londonist has put this unlikely accolade to the test, discovering a relatively comfortable blend of largely Asian old and hipsterish new. Tooting is also home to St George’s Hospital, one of the UK’s largest teaching hospitals, and a junction called Amen Corner, apparently because there are so many churches nearby.

The Common covers 170 acres and contains ponds and a lake (where you can fish, with a permit), a tennis and bowls centre, a cafe and a wildlife education centre and is bisected by a railway line which serves Clapham Junction to its north. To its west is an area with some very smart townhouses, known locally as the Toast Rack, residential Earlsfield and then Wandsworth town centre, with its big Southside shopping and leisure centre (formerly called the Arndale). The River Wandle, from which Wandsworth takes its name, runs into the Thames to the town centre’s north and to the West of Wandsworth Bridge, where some of the more objected to riverside flat developments have taken place. Close by, a gruesome modernist roundabout is distinguished by one of the world’s ugliest advertising structures and a tunnel in which an unpleasant scene from A Clockwork Orange was filmed. You’re probably better off on the Common.