Skip to content
It's been portrayed as a Left-Right contest, but there's been a bit of crossover too
Dave Hill

The general view is that the next Labour candidate for the Ilford South parliamentary constituency will be either Redbridge Council leader Jas Athwal or Sam Tarry, a former Barking & Dagenham councillor and a TSSA union official. Voting will end tomorrow. It’s been a vigorous contest which, on the face of it, has followed the orthodox “moderate” versus Corbynite course: Athwal, an experienced councillor who grew up in the area is presenting himself as someone who gets things done; Tarry (pictured centre, below), who also describes Ilford as “the place I grew up”, directed Jeremy Corbyn’s Labour leadership campaign and is the choice of Momentum locally.

There has, though, been a bit more to it than that. A feature of the contest has been Athwal downplaying his past lack of enthusiasm for Corbyn, which Tarry’s supporters have, naturally, been drawing eager attention to: Athwal was among Redbridge Labour politicians who backed Owen Smith’s unsuccessful challenge to Corbyn in 2016. Meanwhile, Athwal’s admirers have pointed disapprovingly at some of Tarry’s more prominent backers, notably Syed Eyamen Siddiqi, who announced back in March that he had been elected “chair of the newly-formed Ilford Momentum”. 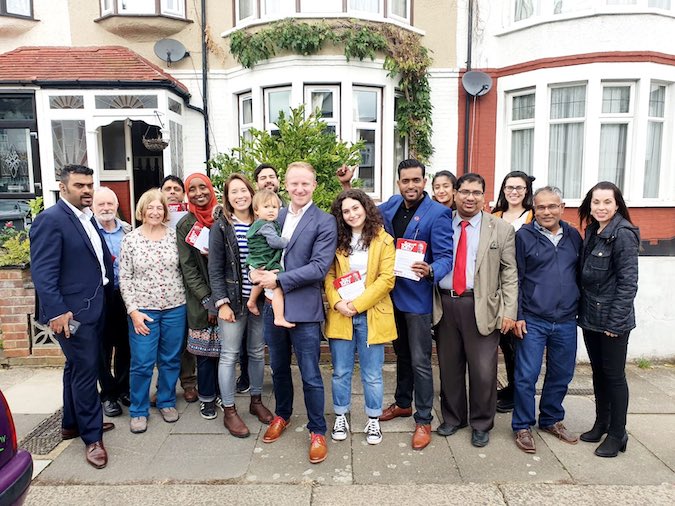 Saddiqi, whose Facebook page suggests he is of that Momentum strand opposed to the expulsion from Labour of activist Jackie Walker over antisemitism, has had a turbulent relationship with Labour since joining it 2015. He was selected – controversially in some eyes – to contest the newly-formed Churchfields ward at last year’s borough elections, but never fought the campaign due to being suspended from the party over allegations of misconduct towards other members. On London understands that Saddiqi’s suspension is still in place. He has been invited to confirm or correct this.

Athwal’s campaign has had a boost by being endorsed by Sonia Klein, a former parliamentary candidate for Ilford North, who was one of four hopefuls shortlisted to fight the Ilford South seat (currently held by Mike Gapes, who left Labour to join the Independent Group, later named Change UK, early this year). After withdrawing from the contest, Klein, regarded as being on the Left of the party, wrote to Ilford South members saying she will instead support Athwal having met him and found herself in agreement with him on “most issues” other than renewing Trident. She told the alt-left website Skwawkbox – which described her decision as “bizarre” – that Athwal had told her his previous opposition to Corbyn had been wrong and that he is “now a believer”.

Another Athwal supporter has told On London that Klein’s backing is very welcome, but that the bulk of Athwal’s support is coming from ordinary Labour members who aren’t really preoccupied with Left-Right issues and simply regard Athwal as a good and able local politician. Tarry has tweeted that he is “really inspired and hopeful” by the support of local people. There is a sense of energetic final hours activity in that part of Redbridge. The result will be known soon enough.

Update: at the end of the day on which this article was published, Jas Athwal was informed that he had been suspended by the Labour Party on the basis of a complaint about him by a fellow member. Following  furious claims of a “stitch up” to stop him becoming the candidate, the entire selection process was itself suspended. The story seems unlikely to end there.

OnLondon.co.uk is dedicated to providing fair, thorough and resolutely anti-populist coverage of London’s politics, development and culture. It depends on donations from readers and would like to pay its freelance contributors better. Can you spare £5 a month?  Follow this link to donate. Thank you.