Skip to content
As with World War II, there is a potential for bold beneficial change, though it will only be realised if national and London government work together
Ben Rogers

When was the last time London faced a crisis as severe as the one it currently confronts? I don’t think it’s controversial to say that it was the Second World War, which ended 75 years ago this year.

It seems likely that, of the two events, the war will remain by far the most transformational.  London bore the brunt of German bombing raids. The capital endured around 350 attacks, most of them at night, killing or seriously injuring some 80,000 Londoners – more than half of those killed across the country as a whole. A third of the City and a fifth of Southwark and Stepney where destroyed. Around one and a half million Londoners were rendered homeless and some 40 per cent of its population moved out of their neighbourhood for some period during the war. Strict blackout lasted from the outbreak of war in 1939 to the spring of 1945, and rationing nine years longer.

The longer-term effects of the war were even more profound, including major advances in war-related technology, including in road vehicles, aviation and electronic communication, a decline in economic inequality, a lessening of class divisions and a new more emancipated role for women. The war hurried the end of Empire and Britain’s decline as a global superpower.

But there are also obvious parallels between Word War II and coronavirus. The pandemic has put the UK on something like a war footing, with government shutting down large parts of the economy and imposing tough restrictions on individual movement, while directing national resources to a single supreme goal: the suppression of Covid-19.

Coronavirus is also going to have long term consequences. It is likely to give the digital economy a powerful push, as more of us get used to working, socialising, shopping and entertaining ourselves online. Many companies will go bust, workers will lose jobs and whole industries, like the aviation industry, will contract, possibly for the long term. Other sectors – digital communications, online entertainment, e-bikes and scooters, health and wellbeing – seem likely to grow.

The virus will change working, travel and settlement patterns, at least to some degree. It could also cause a pivot of the global economy and power eastwards, accelerating the coming of the “Asian Century” – as a general rule, East Asian states seem to have made a better job than Western ones of managing the virus. This in turn would change and probably weaken London’s position as one of the world’s two or three top global cities.

But there is one aspect of the comparison that is particularly relevant. The story of Word War II’s impact on London was not just one of bombings and economic and social change beyond public control. Politicians and policy makers responded to the war and the social and political upheaval it brought with a programme of radical social reform. And while by the end of the war the public longed for a return to normal life and the small pleasures of peacetime existence – street lighting and nightlife, new clothes and make-up, fresh milk and eggs – they also showed remarkable interest in and enthusiasm for this reform.

Most school children are taught that World War II resulted in the creation of the modern welfare state. What is not always appreciated is the extent to which the welfare state’s foundations were laid in the midst of battle. The government-sponsored Beveridge Report, which laid out a blueprint for the creation the modern benefits system, NHS and other aspects of the post-war welfare state, was commissioned in 1941 and published in 1942.

Despite or perhaps because of the pressures of daily life, it aroused huge interest. A post-publication poll found that 95 per cent of the public had heard of the report. Queues formed outside bookshops on launch day and it sold some 650,000 copies – far more than any previous government publication. According to the historian of the Welfare State, Nicholas Timms, writing for the LSE:

“The reception was such that Sir William Beveridge … described the experience as ‘being like carried on an elephant through a cheering mob’ as the wartime coalition government of the day found itself forced to take the initial steps towards recommendations that a subsequent Labour government largely completed.”

Something similar happened in London. The pre-war capital was in many ways a wretched place. Slums were widespread, both in the centre and the east of the city. Green space was in short supply through the poorer areas. The interwar years has seen massive unplanned suburban expansion, resulting in tracts of detached and semi-detached housing eating into surrounding countryside. The capital’s congestion and smog were world famous.

Wartime bombings and depopulation presented London’s leaders with a chance to rethink the capital. And, as with Beveridge, much of the thinking was developed during the war. In 1941 the London County Council commissioned Sir Patrick Abercrombie, professor of planning at University College London and the most famous town planner of his day, to develop a bold new blueprint. And as with Beveridge, the Abercrombie report stimulated fervent public interest.

The hardback edition sold 10,000 copies and was followed by a shortened Penguin paperback edition which sold many more. The LCC mounted an exhibition of the plans in the summer of 1943 which attracted 75,000 visitors, including the King and Queen. And in perhaps the most extraordinary testament to the public interest it provoked, a poster survives for a lecture on the plan given by a British prisoner of war in the Stalag Luft III Sagan camp – the basis for the film The Great Escape (see below). 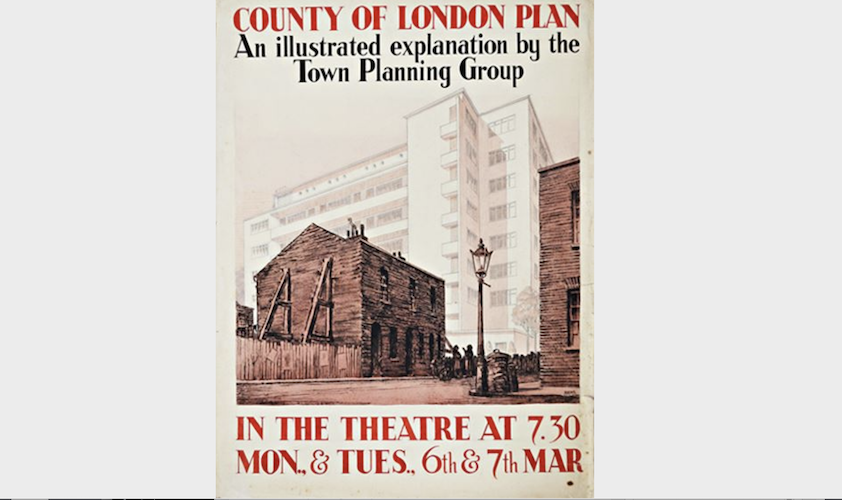 And like Beveridge’s report, the Abercrombie plan was hugely influential. It was responsible for the creation of the Green Belt, the proliferation of modernist housing estates, parks and roads, including the North and South Circular and for the decanting of hundreds of thousands of Londoners to garden cities and new towns around the metropolis. You can watch a highly evocative film of Abercrombie and his chief architect, John Forshaw, talking about their plans here.

This is not to say that Beveridge and Abercrombie got everything right. It is said that Beveridge came to regret that he had not paid more attention to the role of the local state and voluntary action in creating the new post-war order. And the mistakes of modernist town planning have been widely chronicled and condemned (see Simon Jenkins’ book A Short History of London for the latest example). But the point remains that these blueprints only had the impact they did because they were undertaken and launched in the midst of crisis, when opportunity for and public interest in reform were greatest.

It seems clear that London faces a similar opportunity now. The city, after all, for all its success over recent decades, has struggled on many fronts – not least in managing the problems that come with success. As the city has grown, housing and workspace costs have gone up, and those on low and medium incomes have seen living standards squeezed. Poverty has remained stubbornly high and wealth inequality has grown. Congestion and pollution are problems, as they were in the interwar years.

There also seems to be clear public appetite for reform. A recent YouGov poll found that only nine per cent of Britons want to return to life as normal after the end of the lockdown.

National and London government leaders are understandably focused on managing the crisis. But they should be supporting long-term thinking – thinking that draws on and engages with civil society and the London public.

However, any move to reform London today faces one significant difference from 75 years ago. The war had created a strong political consensus, embodied above all in national government led by Winston Churchill with Clement Attlee as second in command. And with Attlee’s unexpected election victory in 1945, both national government and the London County Council were led by Labour.

But today’s politics are more polarised. London has become a more resolutely Labour city, even as much of England has abandoned the party. And the corona crisis seems, if anything, to have worsened already strained relations between London’s Labour Mayor and the Conservative government, as manifested in bitter charges over the government’s recent bailout of Transport for London. This might not matter much if the metropolis had substantial powers over its own affairs. But the Mayor and the boroughs are weak by international standards and rely heavily on central government for funding.

London won’t rise to the challenge and opportunity that the crisis represents unless it and national government can work together.

OnLondon.co.uk is doing all it can to keep providing the best possible coverage of  London during the coronavirus crisis. It now depends more than ever on donations from readers. Individual sums or regular monthly contributions are very welcome indeed. Click here to donate via Donorbox or contact davehillonlondon@gmail.com. Thank you.