I’ve written here before about how London’s public spaces are alive with water features, especially welcome in the periods of extreme heat which are just one symptom of our changing climate. Fountains and lakes have long characterised our parks and, of course, we are a city whose identity is strongly tied to a river. Greenspace Information for London tells us that the capital comprises 47 per cent green space and two percent blue. London National Park City, launched this year with the Mayor’s endorsement, aims to tip the balance and make London 51 per cent green. This would provide increased shade and respite in heatwaves and help us adapt in other ways to the effects of climate change, as well as making London healthier and wilder.

Other water above surface level is less welcome. Recent storms and resulting flooding, such as in Finsbury Park, are reminders that our drainage system is largely Victorian. It wasn’t built for a population of nine million, let alone one which merrily discards cooking fat, cigarette butts, wet wipes and cotton buds in sinks, toilets and gutters, with rarely a thought for the consequences. London’s sewers now overflow on average once a week.

This is a global problem, but, so far, more “fatbergs” have been discovered in London than anywhere else in the UK – most famously, the 130 tonne monster found in Whitechapel in 2017. In 2018, Thames 21 retrieved over 5,000 wet wipes in 116 square metres of the foreshore near Hammersmith Bridge.

For all that, our drainage system remains a spectacular feat of engineering, overseen by Chief Engineer of the Metropolitan Board of Works, Joseph Bazalgette, whose 200th birthday we celebrate in 2019. Bazalgette is appropriately memorialised in Victoria Embankment Gardens, one of the three embankments he designed which encase the sewer pipes catching our waste as it flows downhill. More fitting still, he is to be honoured with a new eponymous open space at Blackfriars, the Bazalgette Embankment, integral to the Tideway super sewer which is being dug under London. When complete in 2024, the super sewer will be seven metres wide and run for 25 kilometres from Acton in the west to Beckton in the east.

Engineering with landscape design to combine drainage, public space and walking or cycling routes is also happening across London on a smaller but no less essential scale. Sustainable Urban Drainage Schemes (or SuDS) are now a priority stipulation in the National Planning Policy Framework. This is much needed, given that 10 per cent of all new homes built in England in 2016/17  were constructed in flood zones with a “one in 100 or greater annual probability of river flooding”, including 53 per cent of those built in Newham, as Christine Murray reports in her article from drain to sponge city. 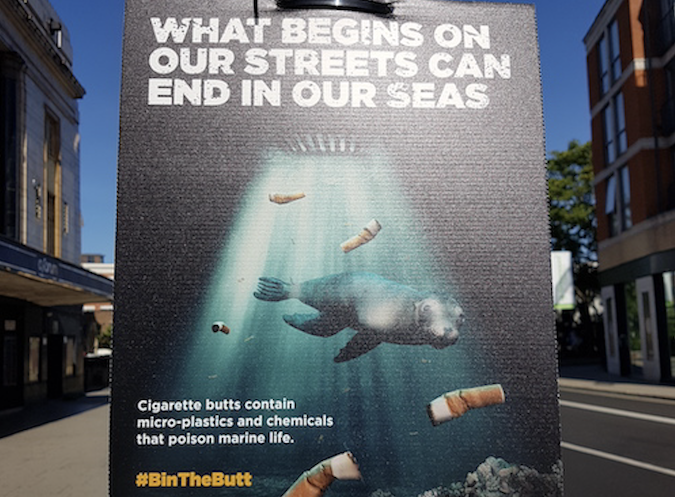 Vauxhall’s Promenade of Curiosities, with its brief to improve connectivity and “sense of place”, the award-winning SuDS for Schools wetlands project in North London and Derbyshire Street Pocket Park in Tower Hamlets are all examples of a lower key and often community focused approach to this very contemporary challenge. You can read more about what the Greater London Authority and others are doing to address surface water flooding and pollution here.

But is all this enough? Good design usually engenders respect for the environment, but the need for comprehensive behaviour change is urgent. Londoners may have spotted the “What begins on our streets can end in our seas” #BinTheButt posters from Keep Britain Tidy, in partnership with local councils and environmental service providers like Veolia. These point out that cigarette butts contain micro-plastics and chemicals harmful to marine life and make a direct visual connection between our street drains and the ocean. Back down at ground level, there are community-led campaigns making the same point with stencilled slogans illustrated with cute goldfish next to rain gutters. And now Andy Serkis is set to play a “talking anus” in City to Sea’s latest plastic pollution campaign on the subject of wet wipes, entitled Be a Good A**hole.

I don’t know if any of this has been evaluated, but do such campaigns drive long-lasting change, eye-catching though they are? Given our attachment to place as proud Londoners, perhaps we should instead take our cue from the Japanese, who have integrated contemporary street art and environmental awareness via permanent colourful and distinctive “manhole” covers, which won’t get washed away by heavy rainfall. As with our own historic covers, these display recognisable local markers, including town, team and event emblems. According to a recent article by Allan Richarz, 95 per cent of Japanese municipalities, across all 47 prefectures are estimated to sport their own unique covers. We are often exhorted to look up and take notice of London’s changing skyline. Sometimes it also pays to look down.

For more on Bazalgette, sewers and what else lies beneath Londoners’ feet, two exhibitions are running in 2019: Secret Rivers, at the Museum of London Docklands (until 27th October) and Under Ground London at the  London Metropolitan Archives (until 4th December).