The foreground news from the ongoing battle to become Labour’s candidate for the theoretically safe Labour parliamentary constituency of Ilford South is that Kam Rai, the deputy leader of Redbridge Council, has thrown himself into the fray. Meanwhile, behind the scenes, hostilities from the original contest, called off 12 days ago in dramatic circumstances, seem to have, if anything, intensified.

The anger and the nature of the issues being fought over provide sobering insights into factional tensions and community politics in that part of east London, with the two competing sides both adamant that the other is grievously at fault.

Depending on who you talk to, all was set fair for Redbridge Council leader Jas Athwal to win the ballot of local members and so secure pole position for succeeding defector MP Mike Gapes, or his principal rival, trade unionist Sam Tarry was on the cusp of victory. Then, late on the evening of Friday 4 October, the day before ballot box votes were due to be cast, Athwal was informed that he’d been suspended from the party pending an investigation into a complaint against him.

Athwal’s supporters furiously claimed the suspension was a Corbynite stitch-up to enable Tarry to claim the prize. Tarry, political officer of the TSSA union, is a close ally of Jeremy Corbyn. But Labour has said “extremely serious allegations” have been made against Athwal and that the timing was coincidental.

Athwal has not said publicly what the allegations are or who has made them. Some reports have said that claims of sexual misconduct appear to be involved, though on the face of it that is at odds with what four sources have separately told On London. Athwal is married to a woman and has four children. The complainant is said by these sources to be male and all have given the same name, which is that of a man well-known in Redbridge political circles. The individual in question has deleted his Twitter account.

Whatever the true position, Athwal has denied the allegations against him and said he responded to them back in August, hearing nothing more of the matter until being told of his suspension.

What happened next? Faced with the furore, Labour called a halt to the original selection and re-started the whole process. Tarry is believed to have retained shortlisted status, along with another of the four original contenders, Syeda Rahim. Athwal is no longer in the race and Rai’s bid is backed by Athwal supporters. Tarry has said it was right to stop the selection process, even though he was “gutted” by the decision, and that he looks forward to winning the re-run. The timeframe for the new process is short and the atmosphere surrounding it described by someone party to it as “a bit ugly”. What festers in the undergrowth?

On London is entering this snake pit with care. There are two particular reasons for that: one is that Sam Tarry has been cordially helpful to the website in the past; the other is that a Sunday Times article about him three years ago, which claimed he didn’t really live in Barking & Dagenham where he was a councillor at the time but in far away Brighton, bore the by-line of Andrew Gilligan, a long standing ally of Boris Johnson (and currently his transport adviser) whose journalistic output has run into difficulties in the past. Tarry’s rebuttal of the Sunday Times claims was reported by the Guardian. Two years earlier, in 2014, he had been cleared of similar allegations by the police.

Tarry’s enemies, however, continue to maintain that he is not quite the hard-working grassroots east London campaigner he portrays himself as. They point to his attendance record as a councillor when representing Chadwell Heath ward in next door Barking & Dagenham for two four-year terms, from 2010 to 2108: the Barking & Dagenham website says he was present at just over half of the meetings he was expected to attend during that time (91 out of 172). Tarry did not endear himself to the then new council leadership by joining a union protest against it in October 2014 and appearing in a Socialist Party video about it, in which he called that new leadership “stumbling and incompetent”. Barking & Dagenham leader Darren Rodwell had just taken the helm at that time. He publicly backed Athwal to run for Ilford South.

It has been claimed that Tarry was not a very effective campaign organiser in Barking & Dagenham with the anti-racism group Hope Not Hate at a time when the British National Party enjoyed electoral support there, though Hope Not Hate chief executive Nick Lowles has spoken up for him as “one of the most decent and committed anti-racists I know”. Just prior to the abandoned 5th October vote, Tarry also received backing from Labour London Assembly Members Jennette Arnold and Tom Copley as well as from Institute for Public Policy Research director Tom Kibasi. Newham Mayor Rokshana Fiaz has endorsed him, as have London MPs Tulip Siddiq and Marsha de Cordova.

Views expressed about Tarry’s approach to the politics of ethnicity and cultural variety in his Ilford South activities also differ sharply. Former Labour candidate for Ilford North Sonia Klein was another contender for the Ilford South seat in the original selection contest and, to the surprise of some on the Left, dropped out and threw her support behind Athwal. Announcing her decision on Facebook, she wrote of “threats, bullying and bribes” and the use of what she called “old colonial tactics of divide and conquer between communities and religious groups to grab a few votes”.

Others on Athwal’s side of the fence have expressed the same sort of disquiet about a Tarry campaign leaflet tailored for Sikh voters, in which Tarry promises to “work with you so that Sikh children in Redbridge schools are not discriminated against”, saying that “just as I support the option for halal meals, I also back the community in demanding there are non-halal meat meals to meet the requirements of Sikh practices. There is nothing preventing the council from doing this”. 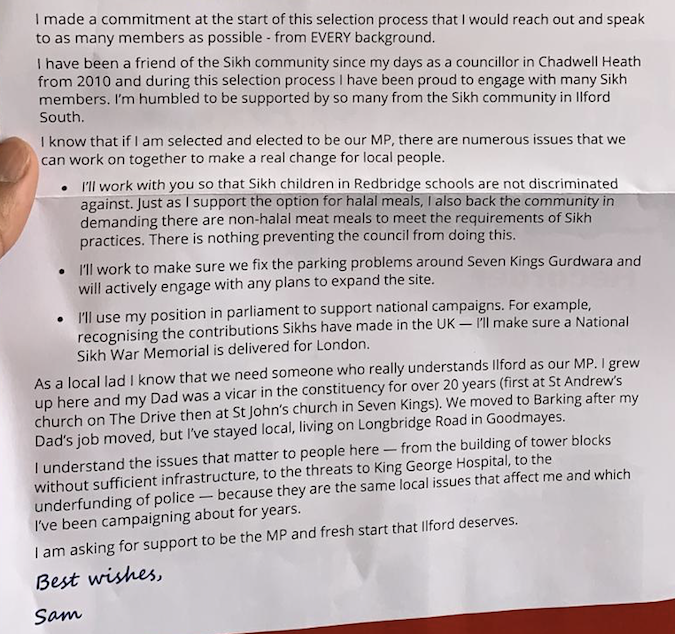 Tarry’s critics say the leaflet seeks to profit from fostering resentments between different faith and cultural groups. One likens it to Zac Goldsmith’s tactics during the 2016 London Mayor election. From that point of view, the leaflet is seen as particularly pointed because Athwal is a Sikh. Yet Tarry is understood to defend his promises about school meals as having been raised by a number of Sikh community leaders and Sikh parents he’s visited and spoken to. His argument is that, far from fomenting suspicion, it is entirely right and normal for those seeking public office to pick up on the concerns of local people they wish to serve.

Tarry’s opponents are also making much of his friendship with Thomas Gardiner, a Labour councillor in Camden. Gardiner is a lawyer who heads Labour’s governance and legal unit, which handles complaints against members. A selfie of Tarry and Gardiner at a rugby match in Twickenham in 2017 is being cited as evidence of a too-chummy relationship between the pair and used to bolster the “stitch up” accusation – one that Labour has strongly denied and Tarry undoubtedly does too. From Tarry’s side, the explanation for all the attacks on him comes down to bitter resentment of what it calls the Labour establishment being challenged by the fresh new forces in the party energised by Corbyn’s leadership.

Such is the fractious atmosphere around this ongoing Labour selection. As ever with local internal Labour antagonisms these days, Momentum forms part of the picture. Activist Syed Siddiqi, who on 1 March announced his election as chair of a newly-formed Ilford branch of the Corbynite campaign group, has been rooting enthusiastically for Tarry. Siddiqi was suspended from Labour about 18 months ago, which prevented him contesting a Redbridge Council seat he had been selected to run for. Asked by On London if his suspension remains in place, he has declined to say.

And then, of course, there’s silly stuff. An Athwal supporter recently received a text which said: “It has come to our attention that you are making derogatory comments about others on Twitter. You are advised to desist – Labour Party Legal & Governance Team”. The receiver of the text tried phoning the messager but was unable to get through or send a text in reply or leave a voicemail. The Labour Party has a unit called “governance and legal” but not one called “legal and governance”.

Before too long, someone will emerge from this mire of factions and recriminations to become Labour’s candidate for Ilford South. Presumably too, the Labour Party will eventually reach a conclusion about the complaint against Jas Athwal. In the meantime, Sam Tarry will no doubt continue with what he has called his “brilliant, positive, enjoyable campaign”. Kam Rai has declared, “When we work together, we win together”. Good luck to both of them with all of that.

This article was twice updated on 17 October, adding more about the person sources say is the complainant against Jas Athwal. On 18 October Labour List reported that the selection shortlist comprises Tarry, Rai, Rahim and two others.