As New Year tradition demands, London’s politicians are out and about, arguing about public transport fares. Sadiq Khan has been talking up his ongoing four-year freeze on “TfL fares” (that’s not all fares, of course) and London Tories have been blaming it for Transport for London’s budget pressures. Meanwhile, Labour activists have been leafleting against the latest national rail fare increases, which transport secretary Chris Grayling has been blaming on the unions.

In the capital, these somewhat ritual exchanges are taking place against an emerging new picture of transport use and demand. As TfL has candidly said, this is making it harder to deliver the Mayor’s transport strategy aims and manifesto pledges. Its annual Travel in London report has elaborated. And further enlightenment can be gleaned from its latest business plan, which was published shortly before Christmas.

The Forecasting and Trends section (pages 38-44) reprises the generally upbeat London transport story of this century: big public transport improvements, the advent of the Oyster card and “an underlying overall progressive change” away from the private motor car, encouraged by the congestion charge. But it continues:

“We are now starting to see a change in those trends. With uncertainty in some parts of the economy, and evidence of a recent slowdown in the rate of population growth in London, public transport growth has levelled off. Meanwhile, in some parts of London there have been some increases in road traffic, primarily reflecting changes to freight and distribution in the capital.

There is also accumulating evidence of an unprecedented squeeze on personal disposable incomes and that more general lifestyle changes, evident for several years, may now be more materially affecting travel demand, such as flexible working and internet shopping, become ever more widespread. All these changes have acted in combination to impact progress towards our strategic ambitions.”

There’s a graph in the plan which illustrates important recent patterns of public transport use and what TfL expects to happen in the next few years. 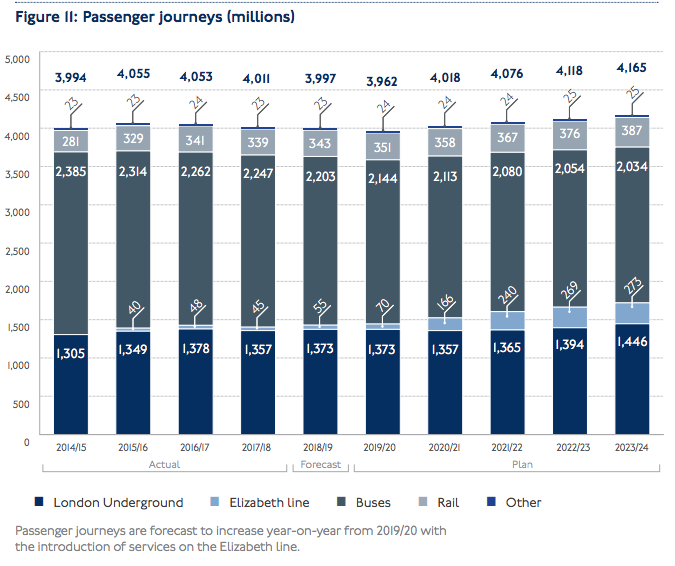 Note that some bits of the Elizabeth Line (Crossrail) are already working. It’s the main section that goes through Central London that’s been delayed. The projected rapid thickening of the Elizabeth Line section of the graph – the light blue bit – from 2020/21  in particular underlines how important the project is to London and to TfL and its finances.

Note also that the business plan anticipates a return to the previous upward trend in Underground and rail use. “Capacity on the Underground and rail networks will increase as a result of investment in new trains, signalling and line extensions,” the plan says. “This will enable enhanced services with more frequent trains on several lines.” Also, population growth, albeit at a slower rate than before, should produce a growth in demand.

But the biggest point to ponder is the forecast continuing fall in journeys by bus. As the graph shows, the bus remains the great workhorse of the London public transport network – look how the dark grey section dwarfs all the others, including the Tube. Yet, unlike the Tube, the bus service is set to have its capacity reduced by TfL, by seven percent.

TfL describes this a rational reconfiguration of the service, and the business plan characterises it as an opportunity created by the forthcoming advent of a full-on Elizabeth Line (page 44), which will bump up Central London rail capacity by 10 per cent. Deputy Mayor for transport Heidi Alexander has defended the changes, stressing that some extra capacity will be released for Outer London.

However, the head of London’s biggest bus provider has expressed concern about the plans, and official transport-users’ watchdog London TravelWatch is alarmed by predictions that bus speeds will continue to slow, making the service less attractive and therefore setting up a self-perpetuating cycle of decline for the most space-efficient form of road transport.

That debate and many others about the capital’s transport networks will continue through 2019. The TfL business plan provides some valuable context for it. It’s well worth a read.