I’m a fashion designer based in Walthamstow making made-to-measure clothes. I do artist collaborations and costumes for tours and shows, and I’ve worked a lot with the Royal Academy. I’ve done plenty of volunteering in my life and a side of me likes to be quite socially involved – for example, I make clothes for people with disabilities. I used to be a commercial designer and am very aware of the fashion industry’s over-reliance on the global supply chain providing clothes that are so incredibly cheap because they don’t reflect the labour that has gone into making them.

I started out at the beginning of the coronavirus crisis by making scrubs for hospitals. “Scrub Hubs” of volunteers running up protective clothing emerged quite quickly after a WhatsApp group call out by East London hospital doctor Katie Ward. The first one was in Hackney Wick.

Then, doctors from the Royal Brompton and Homerton hospitals got in touch with me to say they were running out of gowns and needed them desperately. Gowns are more challenging than scrubs – because of regulations, they are single use, they’re made of expensive splash-proof fabric, and they need to made by experienced sewers to an excellent standard of finishing. 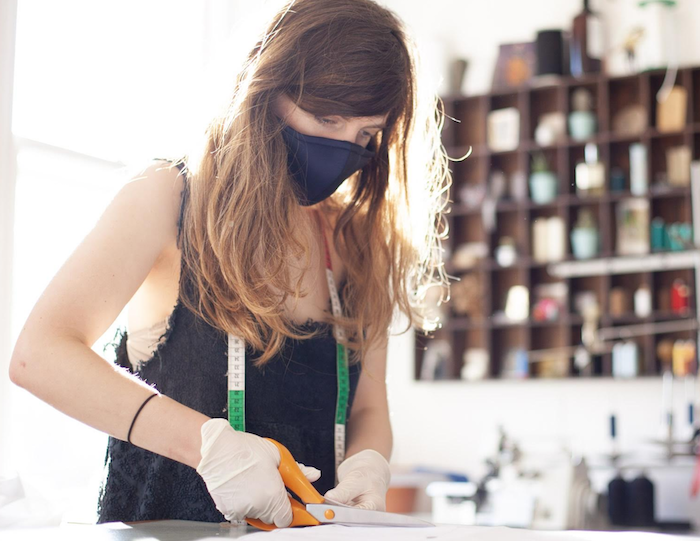 I wanted to produce them in quantity, which would bring down the costs of material per gown and put me in a position to offer some remuneration to the amazing sewers, some of whom are single mothers with children to feed. My sewers were working from home. Sewing factories, where the gowns would otherwise be produced, are very small, with high numbers of machines in very humid environments – in other words, the sort of places where the virus really thrives.

I launched a fundraiser on 18 April, and it was unbelievable how quickly donations went up. Our original goal was £6,000 to make 200 gowns for Royal Brompton. Within a day we’d raised £10,000. We’ve now completed 1,500 gowns and the target has been extended to £150,000 for 10,000 gowns for the Royal Brompton – which specialises in respiratory conditions – and the Homerton. Costs per gown have been halved, from £30 in total to £5 for material and delivery and £10 for two hours of cutting and sewing.

Innovation Textiles, based in Yorkshire, donated the initial 500 metres of fabric. We’ve since partnered with international production company North 6 and have been working to source additional suitable fabric. NHS staff have been very appreciative – “much nicer than the gowns from China” reported one doctor working with Covid patients, while a head of infection control said the gown was “great – the seams are looped and closed and the quality really good. Thank you and a big well done”. We should have the material to reach the 10,000 gown target by the last week of May, but how quickly we finish them depends on what additional funds we can bring in.

It shouldn’t be necessary to crowdfund for personal protective equipment (PPE). With government backing, the cost of making gowns could be so much lower. Yet ours refused to support our initiative because we were considered a small supplier. That was despite proving we could replenish stocks in two hospitals in an agile fashion. As last month’s Panorama programme revealed, there wasn’t a single medical gown in the national pandemic stockpile before the crisis, even though gowns are considered to be second in the PPE hierarchy after gloves. And there are still serious shortages.

Before the coronavirus outbreak, an elderly neighbour of mine who I was close to died at Homerton Hospital. The compassion of the nurses there was incredible. The least we can do is protect them when they give so much.

Readers wishing to support Bella’s gown-making efforts should visit her GoFundMe page. Many thanks to her for speaking to On London.