The Kings Crescent estate stands across busy Green Lanes from Stoke Newington’s handsome Clissold Park, right on the border with Islington, and was once in a sorry state: half demolished, half empty, in poor repair and in urgent need of rescuing. But in the last few weeks it has won two Royal Institute of British Architects awards, the New London Awards Mayor’s Prize and could get yet more gongs. Something’s been going right. What?

Hackney Council deserves plenty of credit. Back in 2011 its cabinet approved an 18-site estate regeneration programme, partly enabled by prior successful bidding for [Labour] government funds to help local authorities to build their own housing. Kings Crescent was to be part of that programme. In 2014 a “combination of refurbishment, retention, demolition and newbuild” was proposed for most of the estate which, in all, contained 275 homes at the time, of which 195 were for social rent (see paragraph 6.5.11).

Architects were appointed to create a “tenure blind” scheme to harmonise upgraded old homes and newly-constructed ones within redesigned public space, but the project as a whole has been run and self-financed in-house by the council itself without selling any of its land and with, it says, close community involvement. The construction work was done by Higgins.

The first two of four phases are now complete. The new estate that has risen in place of the bulk of the old comprises 374 homes in all. Of these, 154 are for social rent – 79 new and 75 refurbished. There are also 36 shared ownership homes, all new, 26 refurbished leaseholder-owned homes and 158 new ones sold at full market rates. The latter properties have produced the money to pay for the affordable types. 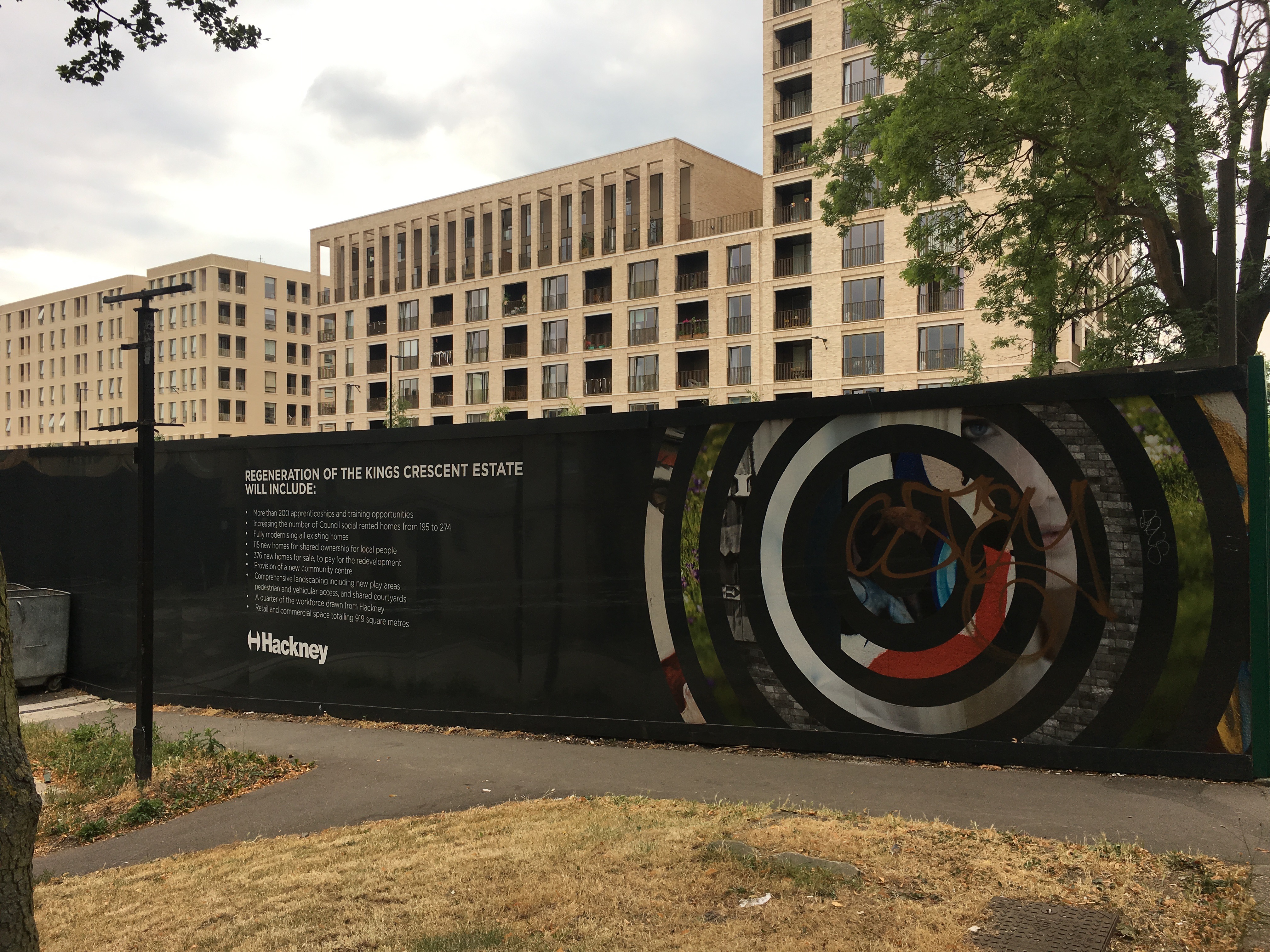 The remaining part of the original Kings Crescent, to be transformed in phases 3 and 4, is currently boarded off and planning permission for its renewal is yet to be received. It is intended that this will be made up of 373 homes: 138 for social rent (120 of them existing ones refurbished); 65 new shared ownership ones; 54 refurbished leaseholder ones; and 116 new market sale properties, subsidising the affordable as in phases 1 and 2.

It total, that means 747 Kings Crescent homes where there used be 275, including 101 shared ownership properties and 292 social rented homes where there used to be 195. The high level of affordability in this combination derives largely from two things: one, Hackney’s use of its own land, which meant a huge element of the cost of many housing developments in London did not exist in this case; two, the high price of market housing in London, especially near an attractive park, which meant more cash with which to fund the “affordable” homes.

It’s hard to quarrel with Hackney’s view that the Kings Crescent regeneration represents a clear gain for Hackney and its residents: a glum, crumbling estate is becoming a toothsome one where social housing renters include occupants of previous ones who had been rehoused elsewhere exercising their “right to return”, those who had stayed throughout taking a “first dibs”option on new ones, and an intake of completely new households from waiting lists.

The council stresses that the shared ownership and full market priced homes too were marketed initially to potential buyers in Hackney. There has been no loss of public land and no need, in this case, for partnering with a housing association or commercial developer. Practical regeneration with the right priorities and pretty good outcomes so far.

LONDON AND BREXIT: Will leaving the EU be good or bad for the capital? On London and the illustrious London Society have jointly organised a debate about this crucial question. Anti-Brexit campaigner Andrew Adonis, former Boris Johnson adviser Daniel Moylan and Lib Dem AM Caroline Pidgeon have already been booked to speak. Buy your tickets here.